community » Discussions » Category » Religion & Ethics » Discussion » ‘Where is everybody?’

The New York Times just did another of its long, strange stories about UFOs :
“ ‘Wow, What Is That?’ Navy Pilots Report Unexplained Flying Objects .”
( CBS News has a summary here if you want to read a paywall-free version.)

As with several similar stories from The Times on this subject, the article takes pains to maintain that these sightings are unexplained and unidentified. “What is that?” the pilot asks, because he doesn’t know and cannot say. And neither can the reporters for The Times or anyone else.

But these articles all also seem to be written, and seem intended to be read, by people who quite clearly have a specific identification and explanation in mind: space aliens.

Which brings us back to Fermi’s paradox or, as he put it, “ Where is everybody? ” 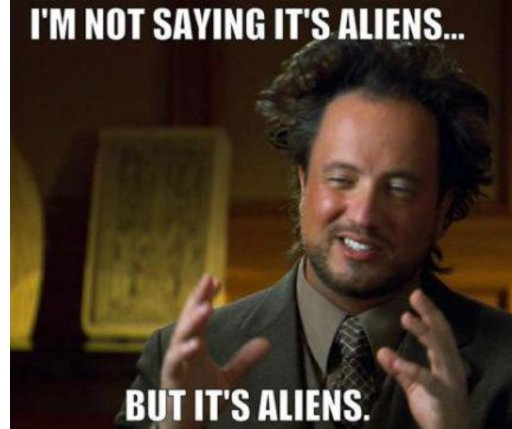 The story goes that the physicist Enrico Fermi wound up in a conversation with several equally brilliant colleagues about the billions of Earth-like planets orbiting billions of other suns, and what they all agreed was the extremely high probability that intelligent life had come to exist on many such other worlds long before it came about here. They were all quite sure that such intelligent life must exist, must have a huge technological head start on us, and must surely be interested — as we are — in exploring the rest of the universe. So where are they? Why haven’t we yet found any evidence of their existence or of their technology and its effects?

One obvious solution to this paradox is that it isn’t a paradox at all — that Fermi and his fellow scientists were simply wrong to conclude that such other intelligent life and other civilizations exist anywhere other than here on Earth. Maybe there is no “everybody.” Maybe we are unique and alone and it’s just us with no one else and nothing else out there in all that empty space.

That’s possible, but as unsatisfying as it is unlikely. Fermi and his colleagues and thousands of other smarter, more knowledgeable people than me all seem certain that “everybody” must be out there, and they’ve outlined many formidable reasons why they think so. So again, if they’re all right about that, then where is everybody? What accounts for their apparent absence? Or, more precisely, what accounts for the apparent absence of any solid evidence of their existence?

This is a fun question that has prompted many fascinating suggestions. Maybe they’re all just avoiding us due to some benign principle of advanced civilizations that forbids meddling with relatively backwards folks like us. Maybe the hard limits preventing faster-than-light travel or interstellar communication are insurmountable and neither we nor “everybody” will ever be able to learn of one another’s existence. Maybe they’re out there, but they’re deliberately hiding. Maybe their technology is such that we’re not yet able to recognize what it is we’re already seeing.

Or maybe they’re already here, walking among us, disguised as us or somehow even thoroughly transformed so as to become like us.

Those last two words — “like us” — might be the biggest obstacle for trying to think about Fermi’s question. We can’t assume that whatever “everybody” might be out there would be, in any way, like us . Yet we also can’t help but think about them in that way because it’s the only frame of reference available to us for pondering such “alien” intelligence. We think about what we would be doing if we somehow had access to faster-than-light travel — exploration, discovery, conquest, plunder — and we can’t avoid projecting that onto “everybody” out there. So maybe we’re faced with an apparent paradox only because we’re not capable of comprehending a truly otherworldly point of view.

That same problem surely exists, also, for “everybody” as well. Their world may be infinitely more advance and wiser than our own, but that wouldn’t make them any more capable of understanding our point of view or how the universe appears to us. Such superior intelligence or wisdom would only make them more acutely aware of the difficulty of understanding the different way we see things. So how might such a hypothetically superior “everybody” go about trying to understand us?

Well, this is where I think the “They Walk Among Us” crowd might be onto something. Not so much the theories about aliens disguised as humans, sent here as spies to orchestrate some nefarious grand scheme (although that would explain a lot), but because walking and living among us would seem like the best way to come to understand who we are, what we are, how we think, and how the universe looks from our point of view.

It wouldn’t be enough for them to just put on a disguise. To really understand us, they’d need their explorers to somehow become us — to assume our form in a way that they could immerse themselves in our perspective, from cradle to grave, yet still somehow maintain their otherworldly identity so that they would be able to report back their findings and allow “everybody” to learn from that.

So imagine this has happened. What would “everybody” learn from it? What would they learn from taking on our form and our life, being born and growing up and living and working among us? Imagine some “everybody” born into some nobody here, some random someone in some backwards backwater town with all the indignities and injustices such a life here entails. It would be as miserable for them as it is and has been for billions of us, but added to that would be the immense frustration borne of their knowledge that life doesn’t have to be like that.

That frustration would compel them to say as much — to point out to their “fellow” humans that life here, and our way of seeing and thinking about life here, could and should be very different, could and should be better and kinder and richer and more just. And then what would happen to them? The same thing that always happens whenever anybody has the temerity to suggest such a thing. The boot would come down, hard, on the apparently human face. The explorer from “everybody” would be silenced, extinguished, probably killed really hard, thus concluding the experiment.

And I imagine, if all of that had ever happened, that it would account for the apparent paradox that Enrico Fermi articulated. Where is everybody? They came, they saw, they withdrew. And now they’re avoiding us, perhaps, until we demonstrate that we’re capable of desiring — let alone of becoming — anything better.

The story goes that the physicist Enrico Fermi wound up in a conversation with several equally brilliant colleagues about the billions of Earth-like planets orbiting billions of other suns, and what they all agreed was the extremely high probability that intelligent life had come to exist on many such other worlds long before it came about here.

They were all quite sure that such intelligent life must exist, must have a huge technological head start on us, and must surely be interested — as we are — in exploring the rest of the universe.

So where are they? Why haven’t we yet found any evidence of their existence or of their technology and its effects?

Common sense dictates that there ought to be reproducible life elsewhere in the Universe, since it seems to have easily happened here and has survived multiple extinction events. Once established, life seems to want to keep on keeping on.

... we have only been broadcasting...

Very true. Our electromagnetic radiation can only have reached a sphere about a hundred light-years across... and would be attenuated to roughly zero long before it gets there!

But the Search for Extra-Terrestrial Intelligence has found nothing, and they can receive from just about anywhere... if the signal is strong enough.

One may argue that radio is terribly inefficient over stellar distances, so any advanced society would surely have invented something better. No one else in our neighborhood uses radio!

And so on... There are all sorts of explanations, arguments, counter-arguments...

The fact remains... we have heard from no one... and as time goes by, odd becomes odder.