Observations from the Hubble Space Telescope point to the presence of sodium chloride on the surface of Jupiter’s icy moon Europa. This is potential evidence that sodium chloride, otherwise known as table salt, exists within Europa’s subsurface ocean—yet another indication of this moon’s potential to support alien life. 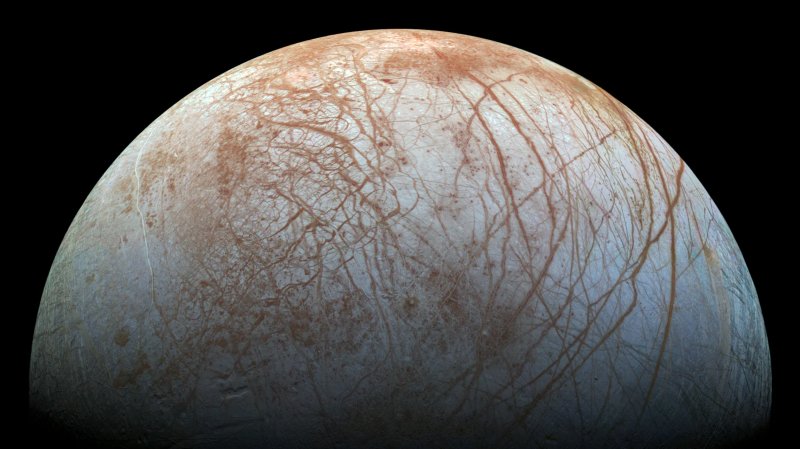 “The potential habitability of Europa’s subsurface ocean depends on its chemical composition, which may be reflected in that of Europa’s geologically young surface,” opens a new study published today in Science Advances. Indeed, this Jovian moon harbors a global-scale, liquid-water ocean beneath its volatile icy crust. It’s therefore reasonable to wonder if the stuff we see on its frozen surface might also exist in the ocean underneath. Europa’s hidden chemical-rich environment offers “an exciting place to explore habitability in the solar system,” the authors noted in the new study, which was led by planetary scientist Samantha Trumbo from the California Institute of Technology.

As the new research suggests, some of this surface stuff might actually be sodium chloride (NaCl), also known as table salt. Previous observations made by the Near-Infrared Mapping Spectrometer aboard the Galileo spacecraft pointed to sulfate salts on the surface of Europa, but there was no evidence that this salt originated from the giant ocean underneath. What’s different in the new study is that the sodium chloride was detected in areas known as “chaos” regions, where intermixing of surface materials and the waters below are possible.

“This changes our picture of Europa in the following way: what kind of salts are on the surface, and therefore what kind of salts are in the ocean,” Jonathan Lunine, a planetary scientist from Cornell University who’s not affiliated with the new study, said in an email to Gizmodo. “For a long time after Galileo, it was thought that magnesium sulfate salts might be the most important. But now that view is changed by this work—it might be table salt!”

The problem with sodium chloride, aside from contributing to high blood pressure and heart disease, is that it’s practically invisible to astronomers. That is, it doesn’t exhibit any easily identifiable spectral features at infrared wavelengths.

“Table salt is white and doesn’t stand out in a visible spectrum,” explained Trumbo in an email to Gizmodo. “But, when it is bombarded by energetic charged particles, like we know happens at Europa, it changes colors and forms unique spectral signatures that we can see with Hubble.”

Indeed, Europa gets pounded by radiation from both the Sun and, especially, Jupiter. The resulting spectral signature of the irradiated table salt could be seen at a wavelength absorption of 450 nanometers (nm).

“We used the Hubble Space Telescope to obtain the first spatially resolved [i.e. accounting for distance] visible-wavelength spectra of the surface of Europa, with the goal of looking for the characteristic signatures of irradiated chloride salts,” said Trumbo. “Specifically we used an instrument called the Space Telescope Imaging Spectrograph (STIS). The spectra showed a distinct absorption feature in the sunlight reflected off of Europa’s surface, near a wavelength of 450 nm, which indicates the presence of irradiated NaCl.”

And because this data was spatially resolved, Trumbo’s team was able to map this chloride feature across Europa’s surface to determine the regions in which the salt is located. Crucially, this salt was detected around young chaos regions—geological features in which the moon’s surface ice is heavily disrupted and where blocks of ice can be seen drifting apart. Chaos regions are likely caused by materials rising up to the surface, causing the ice to break apart. And because material from the subsurface ocean may be pouring on the surface at these spots, “chaos regions may be the most representative of [Europa’s] internal composition,” said Trumbo. 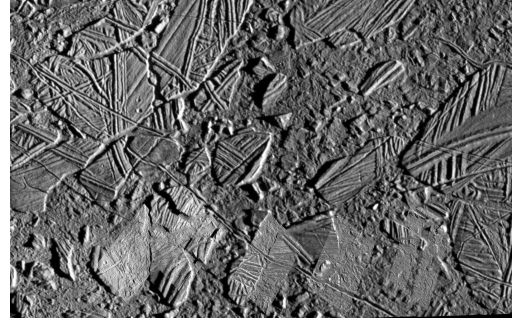 Galileo image showing a young chaos region on the surface of Europa.
NASA/JPL

Importantly, Trumbo’s team also conducted experiments in the lab to see how sodium chloride acquires color, and therefore a detectable spectral signature, in the strong radiation environment around Europa. Lunine said he was “impressed by the extensive laboratory work that the authors performed, which made it possible to interpret the Hubble data in terms of sodium chloride.”

All this said, just because this salty stuff was found on the surface doesn’t mean it actually came from the ocean below. Trumbo said her team is “confident that this salt ultimately originated from the interior ocean,” but “we cannot say for sure that the presence of NaCl on the surface implies a chloride-dominated ocean chemistry,” and that’s “because we do not know how directly related the compositions of the surface and the ocean are, even at chaos terrain.”

Fran Bagenal, a professor of astrophysical and planetary sciences at the University of Colorado, liked the new study, saying the authors “have good data and they are thorough and honest.” It’s “another brick in the wall of evidence that Europa’s ocean could be very interesting—possibly of astrobiological significance,” she wrote to Gizmodo in an email. Bagenal was impressed that the researchers managed to “get numbers out of a relatively weak signal,” adding that it “does seem to look like sea salt on Europa’s surface—but, as they admit, it is not definitive.” 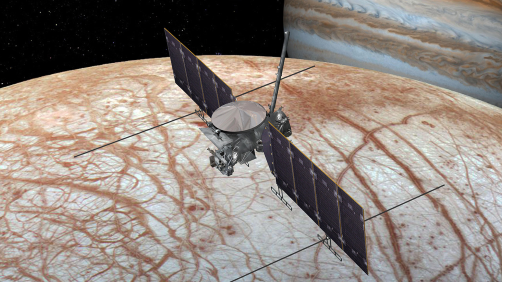 On that note, Bagenal shared some insights about where we go from here, particularly the major role that will be played by NASA’s Europa Clipper —a spacecraft scheduled for launch in the 2020s.

Artist’s conception of the
Europa Clipper, a NASA
spacecraft scheduled for launch
in the 2020s.
NASA

“The next step is the Europa Clipper, which will fly by Europa a bunch of times and [make] many multiple different kinds of measurements: images of the geological structures on the surface, look for spectral signatures to identify the ‘brown gunk’ that seems to be coming out of the cracks from the ocean below, measure magnetic and particle signatures of the electrical currents that flow in the ocean under the ice—and use the radar to estimate the ice thickness, if possible,” she said. “After Clipper makes these measurements—in the late 2020s and early 2030s—we will know enough to send a lander that will be able to ‘scratch and sniff’ the surface.”

In terms of Europa’s potential to host alien life, that’s still an open question—but this moon certainly seems like an interesting place from an astrobiological perspective.

“This finding does not speak directly to the potential habitability of Europa,” said Trumbo. “However, if the NaCl on the surface is reflective of the dominant salt composition of the subsurface ocean, then those waters may be more chemically similar to Earth’s oceans than previously thought—potentially a good thing for habitability.”

Indeed, as this new research suggests, this exotic frozen moon may have more in common with Earth than we ever imagined.

The problem with sodium chloride, aside from contributing to high blood pressure and heart disease, is that it’s practically invisible to astronomers. That is, it doesn’t exhibit any easily identifiable spectral features at infrared wavelengths.

“Table salt is white and doesn’t stand out in a visible spectrum,” explained Trumbo in an email to Gizmodo. “But, when it is bombarded by energetic charged particles, like we know happens at Europa, it changes colors and forms unique spectral signatures that we can see with Hubble.”

Indeed, Europa gets pounded by radiation from both the Sun and, especially, Jupiter. The resulting spectral signature of the irradiated table salt could be seen at a wavelength absorption of 450 nanometers (nm).

meh, I generally prefer Kosher salt. We'll need to mine a different world. I wonder if there's a hot sauce planet out there.

All we have to do is send a rabbi to declare the salt kosher.