A Vatican document on Monday said the Church should consider ordaining older married men as priests in remote areas of the Amazon, a historic shift which some say could pave the way for their use in other areas where clergy are scarce. 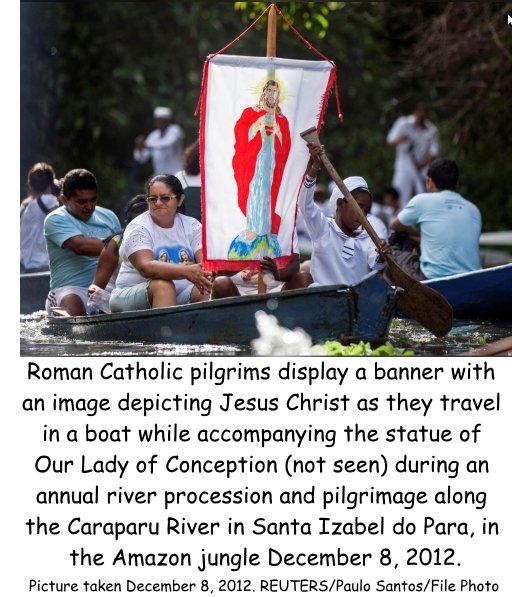 The recommendation , contained in a working document prepared by the Vatican for a synod of bishops from the Amazon scheduled for October, also called for some kind of “official ministry” for women in the area, although it did not elaborate.

It was the most direct mention ever in a Vatican document of the possibility of a married priesthood, albeit limited, and a greater ministerial role for women in one area of the world.

The document spoke of the possibility of ordaining what are known as “viri probati” - Latin for men of proven character - to deal with the shortage of priests. Such men would be elderly, outstanding members of the local Catholic community and with grown-up families.

“While affirming that celibacy is a gift for the Church, there have been requests that, for the most remote areas of the region, (the Church) studies the possibility of conferring priestly ordination on elderly men, preferably indigenous, respected and accepted members of their communities,” the document said.

It said such men could be ordained “even if they already have an established and stable family, in order to guarantee the sacraments that accompany and sustain Christian life.”

Only priests can say Mass or hear confessions, meaning that Catholics in isolated communities in the Amazon can go for many months without participating in either of the sacraments.

Some Catholic scholars have said the approval of ‘viri probati’ in the Amazon may eventually pave the way for their use elsewhere in the world as a response to the shortage of priests.

Pope Francis, in an interview with a German newspaper in 2017, said he was willing to consider ordaining “viri probati” men as priests in isolated communities.

But he ruled out a general opening the priesthood to all married men or watering down the Catholic Church’s commitment to celibacy, seen as a virtue that frees priests to devote their lives fully to serve God.

The synod on Oct 6-27 at the Vatican will include bishops and other representatives, including indigenous peoples, from Brazil, Bolivia, Peru, Ecuador, Colombia, Venezuela, Guyana, Suriname and French Guyana.

At the end of their conference, participants will vote on various articles in a final document, which will then go to the pope, who will decide whether to make it an official Apostolic Exhortation based on the synod meetings.

The document also issues a strong defense for the protection of the environment in the Amazon, deforestation, illegal mining and development projects that threaten native cultures and the delicate ecosystem vital for the planet.

Only priests can say Mass or hear confessions, meaning that Catholics in isolated communities in the Amazon can go for many months without participating in either of the sacraments.

The idea that a man must castrate himself emotionally, in order to represent Christ to others is... sick.

And the idea that the Catholic Church forbids marriage to priests is also false :

Most Eastern Churches distinguish between "monastic" and "non-monastic" clergy. Monastics do not necessarily live in monasteries, but have spent at least part of their period of training in such a context. Their monastic vows include a vow of celibate chastity.

Bishops are normally selected from the monastic clergy, and in most Eastern Catholic Churches a large percentage of priests and deacons also are celibate, while a large portion of the clergy (typically, parish priests) are married, having taken a wife when they were still laymen. [51] If someone preparing for the diaconate or priesthood wishes to marry, this must happen before ordination.

But he ruled out a general opening the priesthood to all married men or watering down the Catholic Church’s commitment to celibacy, seen as a virtue that frees priests to devote their lives fully to serve God.

I would think they could better serve God if they weren't devoting so much energy to tamping down the sexual urges that almost all normal humans experience.  It's one of our strongest natural drives.  And maybe if priests could marry, they wouldn't spend so much time molesting children and nuns.