US 'launched cyberattacks on Iran weapons' after drone downing 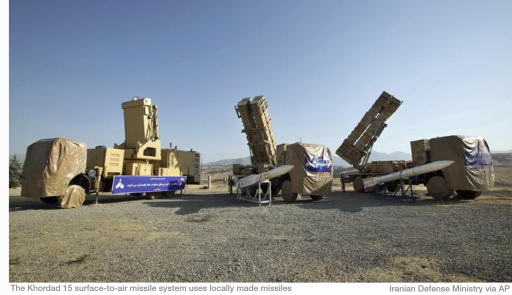 The United States military launched cyberattacks against Iranian missile control systems and a spy network on Thursday after Tehran downed an American surveillance drone, US officials have said.

US President Donald Trump ordered a retaliatory military attack against Iran after the drone shootdown but then called it off, saying the response would not be "proportionate" and instead pledged new sanctions on the country.

But after the drone's downing, Trump secretly authorised US Cyber Command to carry out a retaliatory cyber attack on Iran, two officials told the Associated Press news agency on Saturday.

A third official confirmed the broad outlines of the attack. All spoke on condition of anonymity because they were not authorised to speak publicly about the operation.

US media outlets Yahoo News and The Washington Post also reported the cyberattacks.

The cyberattacks - a contingency plan developed over weeks amid escalating tensions - disabled Iranian computer systems that controlled its rocket and missile launchers, the officials said.

The officials said the US targeted the computers of Iran's Islamic Revolutionary Guard Corps ( IRGC ) after Washington blamed Iran for two recent mine attacks on oil tankers .

There was no immediate reaction on Sunday morning in Iran to the US claims. Iran has hardened and disconnected much of its infrastructure from the internet after the Stuxnet computer virus, widely believed to be a joint US-Israeli creation, disrupted thousands of Iranian centrifuges in the late 2000s.

"As a matter of policy and for operational security, we do not discuss cyberspace operations, intelligence or planning," US Defense Department spokesperson Heather Babb told AFP news agency.

In recent weeks, hackers believed to be working for the Iranian government have targeted US government agencies, sending waves of spear-phishing emails, representatives of cybersecurity companies CrowdStrike and FireEye - which regularly track such activity - told AP.

This new campaign appears to have started shortly after the Trump administration imposed sanctions on the Iranian petrochemical sector this month.

It was not known if any of the hackers managed to gain access to the targeted networks with the emails, which typically mimic legitimate emails but contain malicious software.

"Both sides are desperate to know what the other side is thinking," said John Hultquist, director of intelligence analysis at FireEye told AP.

"You can absolutely expect the regime to be leveraging every tool they have available to reduce the uncertainty about what's going to happen next, about what the US's next move will be."

CrowdStrike shared images of the spear-phishing emails with the AP.

US Cybersecurity and Infrastructure Security Agency Director Christopher C Krebs said the agency has been working with the intelligence community and cybersecurity partners to monitor Iranian cyber activity and ensure the US and its allies are safe.

"What might start as an account compromise, where you think you might just lose data, can quickly become a situation where you've lost your whole network," Krebs said.

"In these times of heightened tensions, it is appropriate for everyone to be alert to signs of Iranian aggression in cyberspace and ensure appropriate defences are in place," the NSA said.

Tensions are high between the US and Iran once again following Trump's move more than one year ago to leave a multinational accord curbing Iran's nuclear ambition.

His administration has instead imposed a robust slate of punitive economic sanctions designed to choke off Iranian oil sales and cripple its economy.

On Saturday, Trump said the US would put "major" new sanctions on Iran next week. He said they would be announced on Monday.

Tehran said it shot down the US drone on Thursday after it violated Iranian airspace - something Washington denies.

Meanwhile, Iran has denied responsibility for the tanker attacks, and a top military official on Saturday pledged to "set fire to the interests of America and its allies" if the US attacks.

The cyberattacks - a contingency plan developed over weeks amid escalating tensions - disabled Iranian computer systems that controlled its rocket and missile launchers, the officials said.

So... we revealed what we are capable of... and then called off the attack, so the Iranians can find solutions...

Oh, you mean like this gem from the Obama administration?

From his first months in office,secretly ordered increasingly sophisticated attacks on the computer systems that run’s main nuclear enrichment facilities, significantly expanding America’s first sustained use of cyberweapons, according to participants in the program.

Mr. Obama decided to accelerate the attacks — begun in the Bush administration and code-named Olympic Games — even after an element of the program accidentally became public in the summer of 2010 because of a programming error that allowed it to escape Iran’s Natanz plant and sent it around the world on the Internet. Computer security experts who began studying the worm, which had been developed by theand, gave it a name:.

At a tense meeting in the White House Situation Room within days of the worm’s “escape,” Mr. Obama, Vice Presidentand the director of theat the time,, considered whether America’s most ambitious attempt to slow the progress of Iran’s nuclear efforts had been fatally compromised.

“Should we shut this thing down?” Mr. Obama asked, according to members of the president’s national security team who were in the room.

Told it was unclear how much the Iranians knew about the code, and offered evidence that it was still causing havoc, Mr. Obama decided that the cyberattacks should proceed. In the following weeks, the Natanz plant was hit by a newer version of the computer worm, and then another after that. The last of that series of attacks, a few weeks after Stuxnet was detected around the world, temporarily took out nearly 1,000 of the 5,000 centrifuges Iran had spinning at the time to purify uranium.

It is going to take the Iranians months if not years to fix their military software; and I am sure the US hackers will be modifying the viruses they used to compensate for anything they come up with.

What is your logic here?

Are you saying that your criteria for what is acceptable from Trump is the worst ever done by Obama (or any other predecessor)?

Stuxnet was a non-violent means of delaying Iran's nuclear program.  Isn't that better than an actual military attack?

The two controversial Presidents turned out to be a foreign policy team. Obama created messes and Trump had to do the clean up.

So... we revealed what we are capable of... and then called off the attack, so the Iranians can find solutions...

Sounds a wee bit like war mongering.. had the US struck, things would/could have escalated to the point of no return.   Had Trump proceeded with the strike, the outcry, if not out and out screaming at the sky would have been non stop.  I would have thought you would be one of those that would not be pleased?

I think things with Iran need to slow down a bit .. the US does not need to be engaged in tit for tat war games

My worry, ever since Trump started this downhill slide by breaking an international agreement - a kind of habit for him - has been a gradual ratcheting up of tensions.

Trump and the ayatollahs are playing "chicken". Headed for the cliff at speed...

a kind of habit for him - has been a gradual ratcheting up of tensions.

True. and then he pulls back.  Is that a good leadership quality ..?  NO .. but it the presidents 'style' of leadership .. right or wrong

Trump and the ayatollahs are playing "chicken"

That is why I say that the US does not need to be involved in tit for tat bullshit .. the supreme leader of Iran is itching for such a move [I speculate] .. it will strengthen his standing among the younger Iranian's that want to be more westernized. I have watched several documentary/news reports on Frontline - the young people in Iran are testing the waters on the regular .. there are quite interesting people in Iran...

Here is a link .. not sure if the whole hour can be viewed through this link .. it is a 2 part series.  I think it is worth watching when you have an hour to sit down...

The article is convincing, so I've bookmarked it.

I spent some time in Iran, professionally, a dozen years ago. Fascinating. The stereotypes were pretty quickly exposed for the nonsense that stereotypes usually are.

I was an auditor. The boss at one of the plants I audited was... a woman...