Survey of 25,000 people in Middle East and North Africa also shows 52% of 18- to 29-year-olds are thinking about migrating 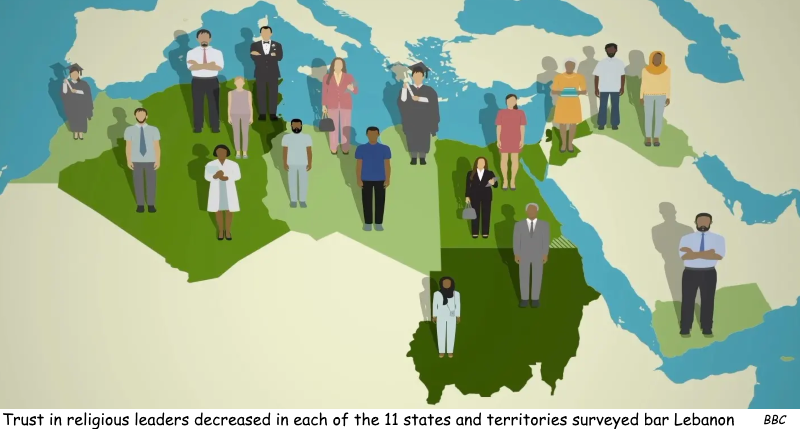 The Arab world is turning its back on religion and on US relations, according to the largest public opinion survey ever carried out in the region.

A survey of more than 25,000 people across 10 countries and the Palestinian territories found that trust in religious leaders has plummeted in recent years.

The study, compiled by BBC News Arabic and Arab Barometer, a Princeton University-based research network, also identified a marked rise in the proportion of people describing themselves as “not religious” – from 11% in 2012-2014 to 18% this year.

At least 60% of respondents in eight of the 11 places surveyed said violence against the US was a logical consequence of interference in the region. The sentiment was most pronounced in Lebanon , Palestine and Yemen, where 75% or more of those surveyed were of this view.

Respondents also expressed concern over rising disquiet in their home countries: people in Algeria , Iraq, Jordan, Libya, Palestine and Sudan, said they felt they were sliding towards dictatorship. More than six in 10 Algerians, and four in 10 Sudanese, believe the last elections were not free and fair, the survey found.

Michael Robbins, the director of Arab Barometer, said the survey – which was conducted at random in private and face-to-face, and consisted largely of multiple-choice questions answered on a tablet – presented a number of significant findings.

“Most importantly, in the vast majority of countries surveyed, governments are not meeting the expectations of their citizens,” said Robbins.

“Often, trust in government tracks more closely with performance on providing security than on economic issues.”

Respondents expressed a change in attitudes over a number of other issues, from migration and mental health to women’s and LGBT rights.

The proportion of people who said they were not religious rose from 11% in 2012-14 to 18% in 2019. Trust in religious leaders has also decreased everywhere but Lebanon, where it has doubled since 2016. Morocco, Libya and Palestine showed the steepest drops in confidence.

Trust in Islamist movements, such as Hamas, Hezbollah and the Muslim Brotherhood, is even lower than for religious leaders Faith in Tunisia’s Ennahda party has declined by 24% in Tunisia since 2011, by 21% in Jordan since 2012, and by 20% since 2013 in Morocco, the survey claims.

Across the region, most respondents supported a woman’s right to divorce her husband but felt that husbands rather than wives should have the final say on family decisions.

In 91% of the places surveyed, majorities said women should be allowed to serve as head of government in a Muslim country, but the same margin claimed that men are better political leaders.

Dima Dabbous, Equality Now’s regional director for the Middle East and North Africa , said the apparent contradiction in responses was “indicative of the dominant mood in the region”.

“There is a realisation that gender equality is a marker of progress and the ‘right thing’ to say is to support women empowerment. But when the framing of the question focuses on the role of men, then the real patriarchal, male-centric bias comes to the surface,” said Dabbous.

“Women in the Middle East and North Africa are getting more educated and participating increasingly in the labour force, but their empowerment will remain incomplete as long as they are still excluded from decision-making positions and political participation.” 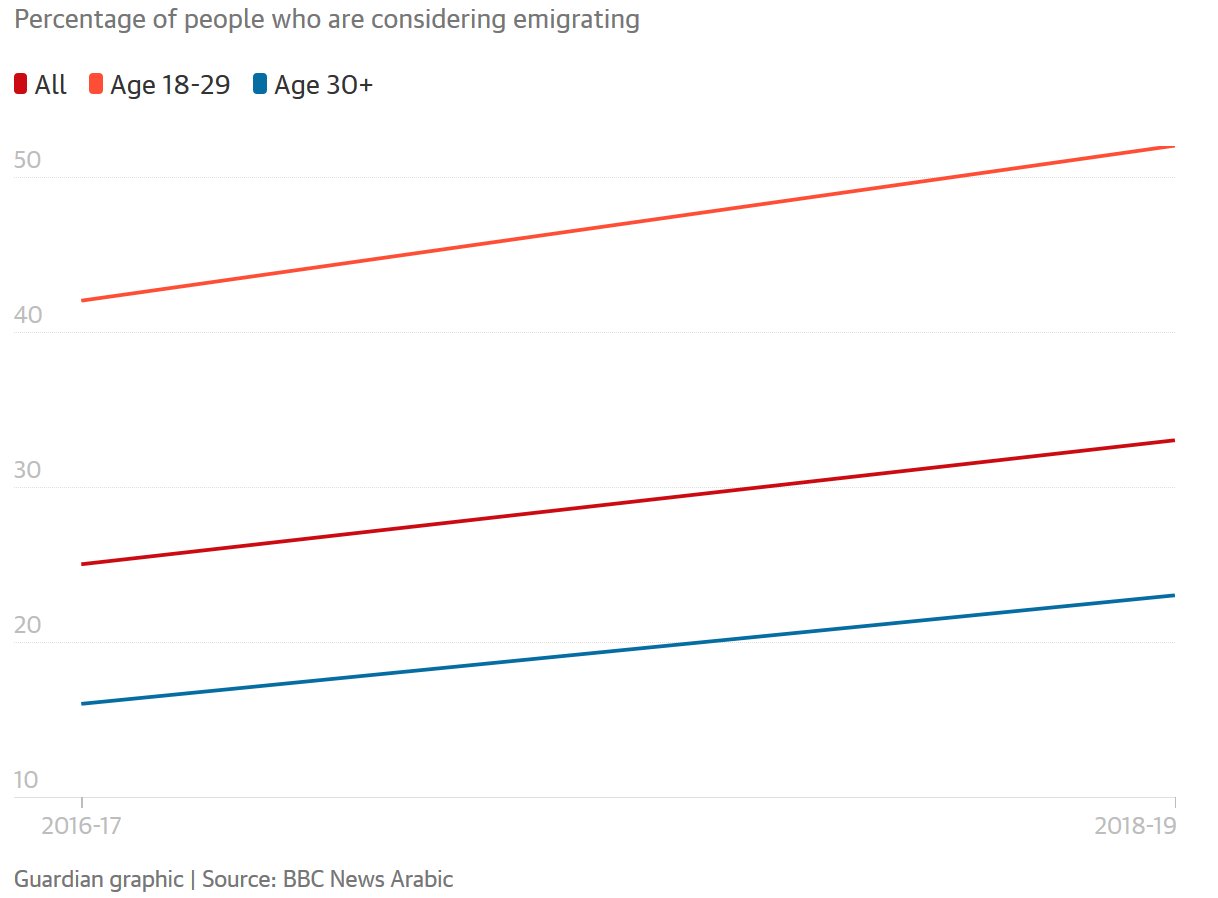 More than half (52%) of 18- to 29-year-olds surveyed in Algeria, Egypt, Jordan , Lebanon, Morocco, Palestine and Tunisia said they were considering migrating – an increase of 10% from 2016 figures.

Moroccan adults under 30 exhibited the greatest desire to leave their home country, with 70% thinking about emigrating. But almost half the entire population surveyed in Jordan and Sudan , and one-third in Iraq, said they were contemplating leaving. Europe was the first choice for North Africans, while Egyptians, Sudanese and Yemenis favoured the Gulf. North America was the top destination for people in Jordan and Lebanon, according to the survey.

The figures also revealed that potential migrants would be willing to leave without official papers: more than 40% of Algerians, Sudanese and Tunisians, and 38% of Iraqis, Moroccans and Yemenis said they would leave without formal documentation.

In the West Bank, only 5% of respondents said it was acceptable to be gay; in Lebanon, the figure was 6%, while in Iraq , Jordan and Tunisia it was 7%. Algeria showed the greatest tolerance, with 26% of respondents expressing no objection to homosexuality.

For taboo or difficult questions, respondents were asked to select “acceptable practices” from a series of options. People believed “honour” killings were more acceptable than being gay in all but one of the countries where this question was asked (Algeria, Jordan, Lebanon, Morocco, Palestine, Sudan and Tunisia).

Dabbous said the responses demonstrated a machismo still heavily prevalent across the region.

“Of course ‘honour’ killings are more acceptable than homosexuality. [They] preserve a social order based on ‘male honour’ and dominant masculinity – which is heterosexual – while homosexuality is a threat to it.”

On average, 30% feel depressed across the region 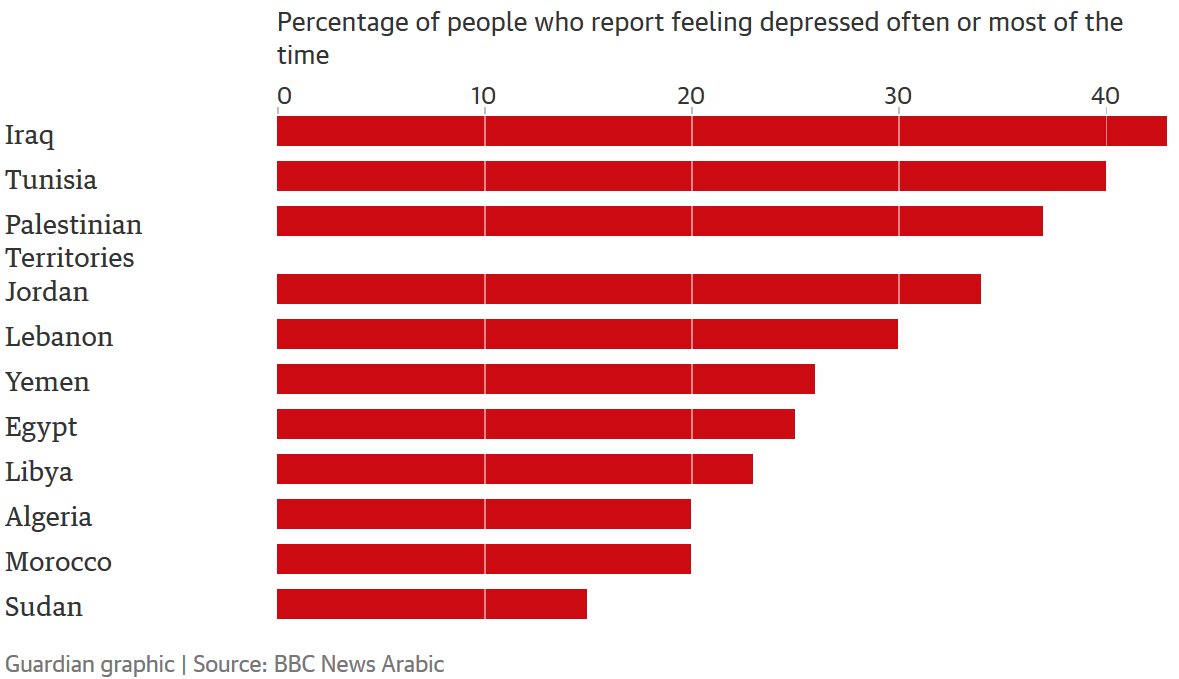 On average, one in three people surveyed said they felt depressed, with the highest proportion in Iraq (43%), Tunisia (40%) and Palestine (37%). Women and less affluent respondents appeared most affected, the survey found.

More than half (52%) of 18- to 29-year-olds surveyed in Algeria, Egypt, Jordan , Lebanon, Morocco, Palestine and Tunisia said they were considering migrating – an increase of 10% from 2016 figures.

Oh, the hell with it!

I'll stick to my stereotypes. I've had them for a long time, and I don't intend to give them up!