For well over a year, DeVos has been blocking the implementation of the law designed to help disabled minority students despite repeated efforts by supporters to force compliance.

The U.S. Department of Education’s various attempts to stall the implementation of federal regulations created by the Obama administration to address racial disparities in special education has blown up into a civil rights issue that continues to dog Education Secretary Betsy DeVos and team.

For well over a year, DeVos has been blocking the implementation of the law designed to help disabled minority students despite repeated efforts by supporters to force compliance.

Those regulations, established under the 2016  Equity in IDEA  (Individuals with Disabilities Act), went into effect in January 2017, but states were given until July 2018 to comply with a standardized program for monitoring how districts identified and served minority students with disabilities. Two days before the full implementation deadline, DeVos pulled the plug, citing concerns that the methodology could incentivize racial quotas, leaving states and students in limbo.

DeVos’ delay of the regulation prompted a lawsuit by COPAA (Council of Parent Attorneys and Advocates), COPAA v. DeVos, which the Department of Education lost in early March. The Department of Justice  filed a notice to appeal  the outcome in May.


The delay also raised the ire of the Congressional Black Caucus. Last July the  Caucus issued a letter  to DeVos and Assistant Secretary Collett noting the Caucus was “deeply troubled by the Department’s response to comments and justification of the delay asserting that racial bias does not exist in special education.”


And the National Association of State Directors of Special Education Inc.,  wrote a letter to DeVos  last February imploring her not to stop the process as states were gearing up to implement the standard methodology, writing “NASDSE does not believe that addressing equity should ever be put on hold.”


A spokesperson for the Department of Education, while acknowledging the filing of the appeal of the lawsuit, declined to comment on whether the agency is implementing the court orders now and declined to provide information about the upcoming surveys.


Some in this space think minority students are overidentified as students with disabilities, and some believe they are under-identified, depending on the data or the study, which is why implementing federal standards and collecting documentation is so important. “It’s more nuanced. It goes both ways,” Seth Galanter, senior director, National Center for Youth Law, told DCReport. “But it is used to segregate kids. We have to come up with a system that addresses both issues. It’s not trying to downsize this, but right size it.” The National Center for Youth Law represented COPAA, an independent nonprofit organization for the advocacy of parents of children with disabilities, in its lawsuit against DeVos, along with law firm Sidley Austin, LLP.


Black students are 40% more likely to be identified as having disabilities than peers, and American Indian students are 70% more likely, according to a report by Department of Education’s 2016 annual report to Congress on the  Implementation of the Individuals with Disabilities Act .

While those numbers are extremely troubling, what is more disturbing is how these students are often handled by their schools. Disproportionately, minority students end up with punitive measures instead of educational support. In 2018, the Government Accountability Office (GAO) found that while black students make up about 19% of students with disabilities, they  account for 36% of all students with disabilities who are suspended from school .


Children are being harmed by suspensions, restraining and seclusion and segregation, Denise Marshall, executive director of COPAA, told DCReport. “When you look at the data, students of color with disabilities are either not in the classrooms at all, or they’ve entered the school-to-prison pipeline,” Marshall said. “They are sitting at home on expulsion and their opportunities to learn are diminished.”

Adding to the complexity of the issue is the way specific disabilities are applied across the races. For white children, the majority is identified with autism. Meanwhile, black and other minority students are often saddled with an “emotional disturbance” classification, which would be a stigma. “Black kids are three times more likely to get identified as problematic,” Galanter said, noting the negative connotation sets these kids up for different patterns. “There are low-status disabilities and high-status disabilities. All of this applies. This regulation tries to grapple with it.”


The point of the Equity in IDEA regulations was to prevent this from happening – the idea of “significant disproportionality,” defined as when districts identify, place in more restrictive settings or discipline children from any racial or ethnic group at markedly higher rates than their peers.


There’s a misconception around the idea and determination of significant disproportionality because it is not in and of itself a conclusion that the local, state or agency violated the IDEA regulation, Marshall said. “It’s simply the trigger to investigate further,” she said. “That’s why I find it more astonishing the lengths to which the agency is pushing back. How can we do right by these kids? It is supposed to be the children who have rights under the law and are desperately seeking a fair and equitable education.”

Congress passed the Individuals with Disabilities in Education Act in 2004 and the Department of Education left everything up to the states for 12 years – identification, implementation and monitoring of the program, Galanter said. “This regulation is intended to force school districts to look carefully at what they’re doing to see if they are accurately placing and disciplining kids,” he said. “Teachers are not supposed to be considering race when evaluating a disability. And this system is actually supposed to help school districts look at problem areas and the root-cause analysis, so race isn’t one of the causes for significant disproportionality.”

The states are overwhelmed right now, said Kevin Golembiewski, an education law specialist and associate with Philadelphia law firm Berney & Sang. “They receive a certain amount of federal funding, but they have so many issues,” Golembiewski told DCReport. “The Department of Education has a role with technical assistance. When they scale back and retrench from statutory duties, it puts more on the states to fix the issues.”


If a school district is identified with a significant-disproportionality issue, it must divert 15% of its federally funded IDEA money to address the issue. Galanter says that from a state perspective, what they need right now is constancy. “Don’t put this on hold, do intensive surveys with schools and communities to do what the department calls monitoring or compliance reviews,” he said. “Dig into records to see if they are treating all kids equally. Educate the officials. The sensible thing to do would be to study this issue and see how it works in practice. If the Department of Education tries to muck around with the regulation, it’s not based on evidence, experience or otherwise. It’s based on ideology.”


The Department of Education does have a plan to gather information from school systems with a  new survey  it intends to roll out in September to school administrations about significant disproportionality. The agency is seeking comments until July 12 on the survey. This latest move is likely another stall tactic and end-run around the court as the agency continues to seek to change the regulation.


There are several issues with this new survey, including the fact that it does not seek parental or teacher input and is optional. “It’s a waste of public resources. We already have the data,” Marshall said, citing the comprehensive survey the agency did back in 2011. “It’s voluntary so the data will be flawed, and they’ll get the response from states that don’t want to implement the regulation and keep the status quo.”


Galanter agrees. He says the agency has a predetermined outcome in mind for this survey. “They’ve set up the system to get answers from certain people and protect them from justifying it publicly,” he said. And the fact that the survey is not going to the actual people making these discretionary decisions on the ground, like classroom special-education teachers and administrators, but to state officials who may not be in touch with school officials, means they are “asking the wrong person and asking the wrong question.” 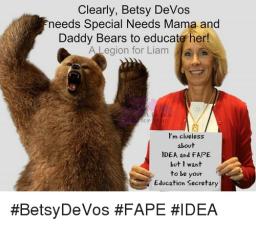