... they are designing the project around a specialized aeroponic “vertical farming” technique so that the garden will use no pesticides and very little water

The world’s largest rooftop urban farm is set to open in   Paris   next year—and it’s already projected to feed thousands of people every year.

The garden, which is being constructed in the southwest region of the French capital, will span over 14,000 square meters (150,700 square feet), making it the largest urban farm in Europe.

Managed by a team of 20 gardeners, the organic sanctuary will grow 30 different plant species. Representatives from   Agripolis , the urban farming company behind the project,   say that the site   will likely produce about 1,000 kilograms (2,200 pounds) of fruit and vegetables every day in high season.

In addition to hosting a variety of educational workshops and farming classes, the site will also allow local Parisians to lease out tiny segments of the rooftop for their own gardening needs.

Agripolis developers say that they are designing the project around a specialized aeroponic “ vertical farming ” technique so that the garden will use no pesticides and very little water.

“Our vision is a city in which flat roofs and abandoned surfaces are covered with these new growing systems,” says Pascal Hardy, founder of Agripolis. “Each will contribute directly to feeding urban residents who today represent the bulk of the world’s population.

“The goal is to make the farm a globally-recognized model for sustainable production,” he added “We’ll be using quality products, grown in rhythm with nature’s cycles, all in the heart of Paris.”

Paris has serious pollution problems. Any and all "green" solutions are good!

All green solutions are not good some make electricity cost prohibitive and outboard motors cost 30k that isn’t good.I do agree more thought about making thing cleaner are good.

Certain cities, might be not best suited for this.

A hot muggy day with smog curtailing visibility doesn't make the environment seem ideal for growing foods to be consumed by us, but

would probably help in reducing such conditions.

I,ve been on thousands of roofs, literally, and most could not sustain the weight of these green solution gardens,or the engineering modifications required to carry the roof load, and also the modification of the roof it self, as only certain roof products are approved for green roofs as drainage and premature failings, can and will be extensive and expensive.,

It is a great idea, but certain standards and specifications need be met, before such endeavors can be considered.

It's been a while since i was in the ole gay Paris', and we enjoyed it , but parisians were a tad rude, and my gt\roup did get flagged from the Louve, but hey, i wear that badge of distinction with honor, as,

A brother in law used to be a senior engineer in the maintenance service at the Louvre. We visited the Mona Lisa alone, before opening hours.

The Louvre is fabulous, but you need a week!

Sounds like a very worthwhile idea. I wish them the best

I have a set up kind of like this along on side in my greenhouse. 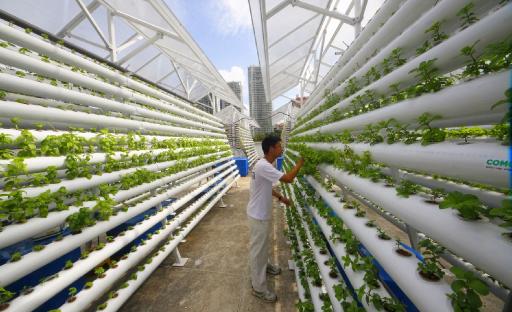 Hopefully it's sucessful and we'll see more and more of these gardens.

When I owned my own home some years back I had a 50 ft x 100 ft fenced garden with a drip-system, and a 20 ft x 30 ft hydroponic/greenhouse garden. Living in So Calif regular gardening is doable practically year round, but, there are some things that are best grown hydroponically or in a greenhouse for best results.

Having both allowed me to experiment with different types of plants and vegetables. The vegetables grown in the regular garden were shared with both our rabbit and desert tortoise. And the products of both types of gardening were shared with family and Friends.

I am not a good indoor plant person, even false ivy turns yellow and shrivels up for me. But, I was good with outdoor and greenhouse gardening.

I can see where the type of gardening being undertaken in Paris would be a very good idea. Hopefully, the idea will be successful and lead to more of such gardening in other areas, and even other countries that are also faced with such conditions.

They are always talking about new ways of planting and I think we will be seeing more of it.