The Moon Festival, also called the Mid-Autumn Festival or Mid-Autumn Day, is   second in importance   only to the Spring Festival. It falls on the   15th day of the 8th lunar month   when the moon is believed to be the fullest and roundest.   Members of the family gather together for a reunion dinner   and to appreciate the moon while eating moon-cakes of various flavors. It is also a festival for farmers to celebrate their harvest. With more than 3,000 years of history, there are different takes on the origin of this festival. Even the most popular one, the story of Hou Yi and Chang E, has different versions.

The Legend of the Moon Festival

The Moon Festival legend about Hou Yi and Chang E is always told to children at this time. Once upon a time, there were ten suns in the sky, scorching many crops and people to death. The Emperor of Heaven summoned Hou Yi to shoot down nine of the suns. Hou Yi succeeded, the weather soon recovered and life was saved. Hou Yi was rewarded with the elixir of immortality. While Hou Yi was still on the Earth, he met Chang E, they fell in love and were married.

Hou Yi wanted to spend his life with Chang E forever, so he went to the Western Queen Mother to ask for the elixir of life. For the good deeds that Hou Yi had performed for the Earth, the Western Queen Mother agreed to give him the elixir, sufficient for two people, half each. Hou Yi returned home and told his wife. They decided to drink it together on the 15th day of the 8th lunar month when the moon was round and bright. But a wicked man named Feng Meng overheard them and wanted the elixir for himself.

On the 15th day, before Hou Yi returned home from hunting, Feng Meng went to Hou Yi's home and forced Chang E to give him the elixir. She knew that she could not defeat Feng Meng so, with no other choice, she drank the elixir all by herself. When Hou Yi came back, he found that his wife had been lifted to Heaven. Chang E decided to live on the Moon because it's closest to the Earth. Hou Yi looked up at the moon and put the foods Chang E used to love in the garden as a sacrifice. Thus, people started admiring the moon on this day. Later, Chang E and Hou Yi came to represent the yin and yang respectively (the moon and the sun).

Moon-cakes are eaten during the Moon Festival. Without moon-cakes, the festival is considered incomplete. This round pastry can contain various ingredients in a thin crust. Most of the flavors are sweet, with lotus seed paste or sweet bean paste in the center.

Once, according to a Chinese legend, moon cakes helped the start of a revolution. It happened during the Yuan dynasty (AD 1280-1368) founded by Mongolians from the north. It was said that a Han Chinese rebel leader, Liu Bo Wen, planned to arouse the Han Chinese to rise up against the ruling Mongolians and end the Yuan dynasty. He gained permission to give gifts to his friends in different bases. These gifts were round moon cakes. Liu asked his subordinates to hide pieces of paper in the cakes with the date of the Han Chinese rebellion (the 15th night of the 8th lunar month). Thus, Liu got word to his people who found the revolutionary message when they cut open the moon cakes. They then set out together to overthrow the Mongolians, thus ending the Yuan dynasty.

Nowadays, Chinese communities all over the world   eat moon cakes during the Moon Festival , such as the Chinatowns in the USA, Canada, Europe, Australia and throughout the world. Some countries like Vietnam and Singapore also celebrate this traditional festival.

Moon cakes are usually about 2 to 2 1/2 inches diameter and about 3/4 to 1 1/2 inch thick.  I LOVE them, and look forward all year to when it's time to eat them.  For the past month I've been eating one a day but today and the next two days are the festival days, so I'll eat two a day, but then no more until next year.  Last night the sky was particularly clear, and the full moon was exceptionally bright.  Hope it will be the same tonight.

There are two other legends about the Mid-Autumn Festival:

Story 2: The Jade Hare Mashing Herbs on the Moon 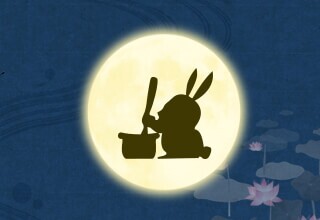 It’s said there used to be three immortals disguised as three poor old men. These poor old men begged for food from a fox, a monkey and a hare. The fox and the monkey offered something to eat, but the hare had nothing to give them. Instead, the hare invited the old men to eat its meat, and promptly plunged into the raging fire.

The three immortals were deeply moved by the hare and decided to bring it to the palace of the moon. The hare living on the moon is commonly known as the Jade Hare. It is good company for Chang’e, and it mashes herbs and makes elixirs of life there, day after day.

Story 3: An Immortality-Obsessed Man Cutting Down Trees on the Moon 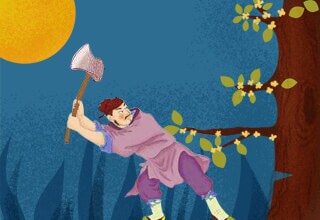 When you look up at the bright moon, you can see a black shadow, which is just the legendary Wu Gang, trying to cut down a sweet osmanthus tree.

Wu Gang was an ordinary woodcutter who was obsessed with becoming immortal. He went to mountains and invited an immortal to be his teacher, seeking instructions from him.

Wu Gang, however, was careless and impatient and couldn’t concentrate. The immortal became furious and made Wu Gang stay on the moon, informing him he could become immortal once he had cut down the moon’s sweet osmanthus tree.

Wu Gang tried his best to fell the tree with his axe. The tree, however, would always re-grow naturally into its former state. Day by day, Wu Gang cuts down the sweet osmanthus tree, but he can’t manage to fell it permanently, for it keeps re-growing.