Russia replaces US in northern Syria

Russia moved to fill the void left by the United States in northern Syria on Tuesday.. At the same time, tensions grew within NATO as Turkey defied growing condemnation of its invasion from its Western allies. 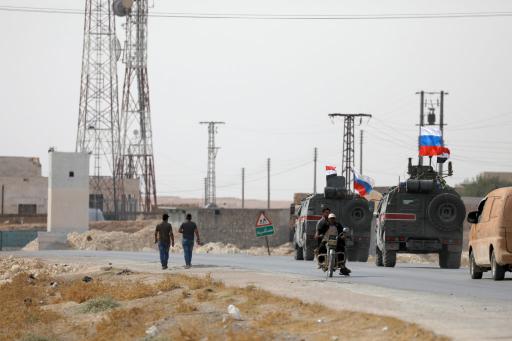 Now in its seventh day, Turkey’s offensive against Kurdish fighters has upended alliances and is re-drawing the  map  of northern Syria for yet another time in the 8-year-old war.

Russia moved quickly to further entrench its role as a power broker after President Donald Trump ordered the pullout of American forces in northeastern Syria. The American  move  effectively abandoned the Kurdish fighters who were allied with the U.S. and cleared the way for Turkey’s invasion aimed at crushing them.

Syrian troops waved flags in the streets after they rolled into Manbij, a flashpoint town west of the Euphrates River that Turkey had been aiming to capture and wrest from Kurdish control.  Video  by Russian journalists with the troops showed what appeared to be an abandoned outpost where U.S. forces had been stationed.

Russia moved to fill the void left by the United States in northern Syria on Tuesday..
Trump's Russian puppet-masters will be quite pleased with him!

Of course Trump's comment about pulling these troops out of the Middle-east is, as usual, a total lie:

A U.S. official said the approximately 1,000 U.S. troops being withdrawn from northern Syria will reposition in Iraq, Kuwait and possibly Jordan.

The U.S. forces in Iraq could conduct cross-border operations against the Islamic State group in Syria as they did before creating the now-abandoned partnership with Syrian Kurdish-led forces, the official said, speaking on condition of anonymity to discuss sensitive planning for a U.S. pullout.

I guess when one only has to move a few miles North, it takes no time at all.

Must be nice to "Already" have that many folks and equipment in a region to do that, since 2015, probably earlier ?