BUZZ NOTE:  I posted this because elsewhere an article was posted about China's one child policy, a policy China cancelled some years ago and is irrelevant now, and it was also about the manner in which Chinese women are treated, which is blatantly false, as I can state having been living there for 13 years in three different cities in areas of differing economic situations. 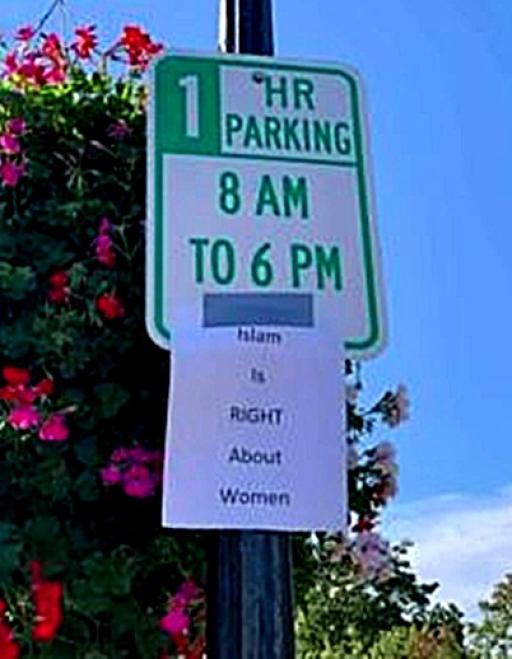 WINCHESTER, MASS. (WHDH) - Residents in Winchester are debating free speech versus hate speech after flyers reading “Islam is RIGHT About Women” were found plastered around town.

Anita Davison told 7NEWS that she was walking her child to school on Wednesday when saw the concerning flyers struck to street signs near the town’s center.

Davison says she was alarmed by the sight of the flyers and immediately ripped them down.

“Political climate at the moment, and all the things happening around the world, it just puts a little fear in you,” she said.

After Davison brought two flyers to the Winchester Police Department, officers went out and found eight more, including one that was posted outside of an elementary school.

Some residents say they think the signs refer to strict laws applied to women.

“Putting signs up that make people feel uncomfortable is unfortunate, particularly in this time and age,” Jim Leary said.

Police say the signs were not threatening and considered free speech. They opted to get rid of them because they were placed on town property.

Davison hopes others will do as she did if more signs pop up.

“Most people have been supportive of the decision to take them down,” she said. “Others have said that I’m not for free speech but I really am. I just feel like that was on the side of hate speech.”

No one has come forward to explain the meaning behind the message.

I did find this comment on the situation, which does provide some insight as to the possibilities of what it means:

In the quiet suburb of Winchester, Massachusetts, signs have been found posted on poles, all bearing the enigmatic statement “Islam is RIGHT about women.” No one seems to know what the statement is meant to mean. Some are unconcerned, but for many there is unease, likely prompted by the predictable desire to claim that this is an example of islamophobia. In this view, the person who put up the signs “Islam is RIGHT about women” meant through sarcasm to mock Islam and its true Believers.

Another possibility is that the statement means exactly what it says. A True Believer put up the signs. He – or a not impossible she – wanted to make a statement in defense of Islam and what islamocritics describe as its misogyny. The statement in this view is to be taken at defiant face value. We Muslims are correct in our treatment of women; Islam is “RIGHT” to treat men and women unequally. That treatment is not detailed in the laconic sign, but you who read this sign can fill in the details for yourselves by consulting the Qur’an. Here are some of them: Islam is “RIGHT” to have women hide their dangerous seductiveness by covering themselves, in everything from just a hijab to the full cover of niqab, burka, and chador. Islam is “RIGHT” to endorse polygyny, and to allow husbands, but not wives, the triple-talaq divorce. Islam is “RIGHT” to insist that daughters should ordinarily inherit half of what sons inherit, and to insist that the testimony of a woman should be worth only half that of a man.

There is still another possibility. Perhaps someone deliberately put up this bit of deliberately ambiguous mystification in order to attract the greatest amount of attention and discussion. And the planned puzzlement worked. The story of the signs posted in Winchester, Massachusetts has for several days, according to Google’s English version, been one of the three most cited stories about Islam in the United States. The intent of the poster was neither to straightforwardly praise nor through sarcasm to blame Islam, but to start discussions, not just in Winchester, but everywhere that the story was reported, about what the gnomic statement was intended to say. Was it meant to be taken, literally, as true, or sarcastically, as false? Or as a prompt to detailed examination of the view of women in the ideology of Islam?

Those discussions, prompted by the signs and their massive coverage, would necessarily require an examination of what Islam teaches about women, their need for cover, their abilities, their islamically correct behavior, their necessary subservience to men as their natural superiors. Such discussions, wherever they take place, will quite naturally lead to examination of such Qur’anic verses as 4:34, where Muslim men are told they may “beat” their wives if they even suspect them of disobedience, and the men are furthermore instructed in the same verse that they are the guardians of their wives because of their superior abilities. Islamocritics will be able to point to that verse. The goal is to get a discussion going, one in which islamocritics will be able to introduce those subjects in a non-hostile manner, by presenting themselves in the role of innocent, youth-wants-to-know inquirers.

Here is how one of those islamocritics might raise such questions with Muslims:

“I, too, have wondered about those posts in Winchester, the ones that read “Islam was RIGHT about women.” I have made a list of some of the questions that trouble me about the treatment of women in Islam, so please help me out here. First is the Qur’anic verse that allows husbands to “beat” their wives if they suspect they have been disobedient. I have seen Muslim authorities online explain that a husband does indeed have full rights to beat his wife, and other authorities explain that the husband can only beat his wife ‘lightly,’ as if with a miswak, or small toothbrush? Which is true?

“Then I wonder about the need for cover. Why are some Muslim women forced to wear the hijab or, in a still more extensive cover, the niqab or burka or chador? Isn’t this based on the idea that women must in public hide their attractiveness? Doesn’t this assume, wrongly, that Muslim men can’t control their libidos, and the seductiveness of women must be hidden from view? Do you think a woman who object to such cover should be punished? Recently in Iran, a few dozen women were sentenced to prison for refusing to wear the hijab; their female lawyer was sent to prison for 38 years merely for defending them. Do you think that a just result? Do you think Muslim women should have as much right to refuse, as to adopt, such cover? Do you really think Muslim men are incapable of holding their libidos in check when they see uncovered women?

“Another question: why can Muslim husbands take up to four wives, while a Muslim wife can have only one husband? Doesn’t this devalue women? And why should a Muslim husband be able to divorce his wife simply by uttering the triple talaq, while Muslim wives have a more complicated process, in which their stated reason for divorce will be examined for its validity by religious authorities – it may be turned down – and they are also required to  return the mahr (the sum given to the bride by the groom at marriage)?

“Why do sons in Islam get to inherit twice as much as daughters? And why is the testimony of a Muslim woman worth only half that of a Muslim man? I [the islamocritic] have read that in a hadith Muhammad justifies this last rule about the lesser worth of a woman’s testimony by referring to “the deficiency of her [woman’s] intelligence”? Did Muhammad actually say that? And do Muslims believe that today? What can they answer?”

These are the questions an islamocritic will be able to raise naturally, in discussing the conceivable meaning of “Islam was RIGHT about women.” They will hover permanently in the air, because Muslims will be unable to provide satisfactory answers to these questions. And that is what I allow myself to believe was the whole intent of the enigmatic posts in the first place.

No one has come forward to explain the meaning behind the message.

Knowing how they treat women, the meaning really isn't all that difficult to figure out.

BUZZ NOTE:  I posted this because elsewhere an article was posted about China's one child policy, a policy China cancelled some years ago and is irrelevant now, and it was also about the manner in which Chinese women are treated, which is blatantly false, as I can state having been living there for 13 years in three different cities in areas of differing economic situations.

This is social media-- do you actually expect things posted here to be . . . truthful?

This is social media-- do you actually expect things posted here to be . . . truthful?

Well, of course it does happen occasionally.

You know the old saying:

Even a stopped clock is right twice a day!

“Islam is RIGHT About Women”

Right about what? Does the Quran have something to say about the way women park?

I guess the flyer statement is a mystery, isn't it.