A crisp autumn (or should we say fall?) day is a welcome sight to many. (Photo: Kichigin/Shutterstock)

As the seasons change, the days grow shorter, the leaves change colors and the collection of flavors called pumpkin spice is added to practically everything.

These are just a few signs that autumn has arrived. Or is it fall? The indecision about which name to use only seems fitting when applied to a season that is itself a shift from one clearly defined season, summer, to another equally well-defined season, winter.

With two names naturally comes the question of why — one name is good enough for all the other seasons, after all — and which one should be used. Maybe fall is only for certain times of the season, and autumn for the other, like the difference between dinner and supper. Or perhaps autumn is only used by pretentious folks who like to sound fancy (e.g., this writer) when fall is perfectly acceptable.

The fall of autumn

Unlike summer and winter — words derived from Proto-Indo-European terms meaning "half" and "wet," respectively, and, as such, have been around for well over 1,000 years — the first word for the season between them is considerably younger.

According to Merriam-Webster , autumn first appeared in English in the 1300s, derived from the Latin word   autumnus . Autumn caught on quickly, likely in no small part because it replaced the original name for the season, which was simply harvest. As you might imagine, calling the season in which crops were collected from the fields harvest might've been confusing given that harvest is also the name for the act itself.

So autumn was the go-to term for this time between summer and winter for a couple of centuries. Fall as a name for the season came about sometime in the 1500s, a shortened version of the very poetic phrase for fall, "the fall of leaves." The English phrase captured the essence of the season without leading to confusion, like harvest potentially did. Not even a century later, the phrase has become a simple word: fall.

Around this same time, the English language was traveling the globe as England's empire expanded, and it was going through some changes, as many languages do. This was particularly true in the American colonies. English language shifted in the U.S., whether it be in terms of spelling — thanks, Noah Webster — or general usage. Those in the colonies and those back in England didn't converse all that regularly, and so English began to shift in the colonies. When you include a desire for independence, there's even more reason to have a sense of linguistic difference. It took a bit of time, but by the mid-1800s, British and American English speakers had further diverged and fall was the common word for autumn in the States, while autumn was maintained as the word for fall in England.

'Fall' does capture the reason for the season much better than 'autumn' does. (Photo:  Kenny Louie [CC BY 2.0] /Wikimedia Commons)

As for which term for the season you should use, the long and the short of it is that using either fall or autumn is acceptable. One is just as good as the other. Even journalistic style guides agree. Look up "autumn" in the Associate Press's guide and you get referred to their entry on seasons. It, oddly, doesn't mention autumn, however, only fall. This led one writer to inquire if fall is therefore the preferred name for the season in AP style. "No preference intended," the AP editors wrote back. "The terms are used interchangeably."

Henry and George Fowler's "The King's English," a smash hit of a book when it was published in 1906 and published again in 1908 concerned itself with proper usage of the English language, specifically British English. The   book contains a whole chapter about the insidious nature of Americanisms   and how they were ruining Kipling. However, the brothers did agree that the Americans got one thing right, and it's the use of the word fall instead of autumn.

"In the details of divergence, [the Americans] have sometimes had the better of [the English]," they write. "Fall is better on the merits than autumn, in every way: it is short, Saxon (like the other three season names), picturesque; it reveals its derivation to every one who uses it, not to the scholar only, like autumn; and we once had as good a right to it as the Americans; but we have chosen to let the right lapse, and to use the word now is no better than larceny."

And there's no worse crime than word larceny.

While location will likely play a part in where you hear fall or autumn, it's ultimately up to you to decide which one best captures the spirit of this particular season. Please, though, whatever you do, just don't start calling it pumpkin spice season.

You might recall that last year I did a poll asking whether you call this season Autumn or Fall.  Most of the answers were Fall. 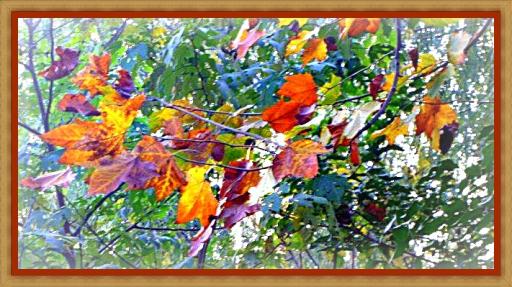 Very interesting Buzz.  The study of language history can be fascinating.