In Flanders Fields the Poppies Blow

Armistice Day or “Remembrance Day” as it has come to be known, originated following the end of the First World War. The Armistice agreement was signed between Germany and the Allied Forces in Paris on Monday, 11 November 1918 at 0500 hours. The ceasefire went into effect at 1100 hours the same morning. The  eleventh hour of the eleventh day of the eleventh month.

The first Armistice Day was observed in 1919. On November 6th, in the House of Commons, the then acting Prime Minister of Canada, Sir George Foster read a message from King George V addressed “to all peoples of the Empire”.

The following is his letter:

“To all my people:

Tuesday next, November 11th, is the first anniversary of the armistice which stayed the world-wide carnage of the four proceeding years, and marked the victory of right and freedom. I believe that my people in every part of the Empire fervently wish to perpetuate the memory of that great deliverance and of those who laid down their lives to achieve it.

To afford an opportunity for the universal expression of this feeling it is my desire and hope that at the hour when the Armistice came into force, the eleventh hour of the eleventh day of the eleventh month, there may be for the brief space of two minutes, a complete suspension of all our normal activities. During that time, except in rare cases where this may be impractical, all work, all sound and all locomotion should cease, so that in perfect stillness the thoughts of every one may be concentrated on reverent remembrance of the glorious dead.”

In Canada, from sea to sea, at precisely 1100 hours local time, all businesses, factories, schools, offices and even traffic came to a halt for the two minutes of silence.

Remembrance Day |  History of the Poppy

Millions of Canadians pin one to their lapel or hat each and every November 11th as a way of expressing their remembrance of the servicemen and women who gave their lives in two world wars and in Korea. Others remember the sacrifices made in the world’s trouble spots such as Cyprus, Bosnia and most recently in Afghanistan. Whatever the reason, in Canada, the poppy has become to be known as the one universal symbol of remembrance.

The story of how the poppy has become the symbol of remembrance has varying origins but the overall basis for the wearing of the poppy is without question, Captain John McCrae’s poem, “In Flanders Fields”. Some claim that a young New Yorker by the name of Moira Michaels was the first to wear a poppy as a means of “keeping the faith” after reading a copy of “In Flanders Fields”. During a meeting of the YMCA wartime secretaries in New York, which was hosted by Ms. Michaels, she had been given a small monetary gift by visiting delegates. She thanked them for this gift and said that she would use the money to purchase poppies, relating to them John McCrae’s poem which had been her inspiration. Amongst them was the representative from France, Madame E. Guerin who was in turn inspired to take this idea home. In 1921, Madame Guerin and a group of French war widows approached the former British Commander-in-Chief, Earl Haig, at the Legion Headquarters in London, about the idea of selling artificial poppies to raise monies to help needy soldiers and their families. The Legion had first been formed to help veterans and their families who had been left impoverished during the war and Haig was quick to adopt their idea as an excellent method to both honour the dead and help the living.

Poppies indeed became significant as a remembrance of war as prior to the Great War, poppies were rare in the fields of Flanders. It is said that the chalk soil of Flanders became rich in lime due to the rubble produced by the massive bombardments of battle. The earth that was stirred up by so many artillery shells in turn released the poppy seeds that would not normally have had the chance to germinate. They spread prolifically across the fields until it appeared as a sea of red. Perhaps a fitting ironic symbolism of the blood spilt by so many for so little. 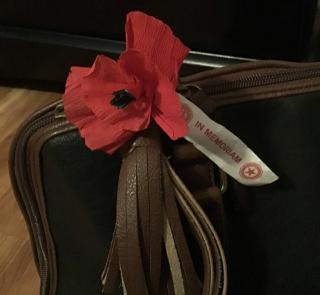 In Canada I never failed to purchase a poppy from a legionnaire to wear on my lapel.

I always purchase a poppy from one of our veteran's groups. This year it was the DAV...(Disabled Amerian Veterans)...

If I may Buzz this is an article about Francis Pegahmagabow a highly decorated First Nations (Ojibwa) solider. The reason I am linking this article is that Francis was a hero yet came home to racism, much like the Native American soldiers did after most wars.

Last night PBS had an outstanding program entitled ''The Warrior Tradition''. The story of NA's fighting in the US military. It is sometimes difficult for non-Indians to understand why we fight for a country that tried to destroy us. PBS did an outstanding job interviewing many NA's from different tribes and getting them to express their real feeling and motivations.

Perhaps Francis would have liked to be a part of this.

Thank you for posting this article. As someone that has relatives on both sides of the border, it is important to me.

IMO, Flander Field is one of the most powerful poems ever written.

English premier league teams wear it  we actually have a guy on Manchester United (the biggest and  greatest football club in the world)that refuses he is Serbian.

Why?  Because he rooted for the other side?

DAMN!!!  It's a CBC link, and I've never been able to open a Canadian Broadcasting Corporation link here.  I really wanted to see the story.  However, I did read this:

And I think that quite a while ago I posted an article about him on the Anishinaabe.group.

He was Canada's Sgt. York and should have received the same kind of accolades that Alvin York did.

You did post an article on him, and it was excellent.

The deadliest sniper of WWI was Francis Pegahmagabow, an Ojibwa soldier

In the bloodshed and chaos that is the battlefields of the First World War, hundreds of thousands of young Canadian men sign up to fight for their country overseas — but there's one who sticks out from the crowd. His bravery and fearlessness are legendary. His fellow soldiers call him Peggy.

Francis Pegahmagabow was born in 1889 on the Parry Island Indian Reserve (now the Wasauksing First Nation), an Ojibwa community near Parry Sound, Ontario. When he is three, his father dies and his mother returns to her home in the Henvey Inlet First Nation.

In the care of elder Noah Nebimanyquod  — who had also raised Pegahmagabow's own orphaned father — young Francis spends his childhood steeped in the customs of the Anishnaabe. Nebimanyquod teaches him to fish and hunt, while his foster mother educates him about traditional medicine. He grows up practicing both traditional Anishnaabe spirituality and Roman Catholicism.

Pegahmagabow leaves school at the age of 12 and begins working at lumber camps and fishing stations, eventually working as a marine fireman. When he's 25, war is declared in Europe. He enlists in the Canadian Expeditionary Force on August 13, 1914.

Pegahmagabow is assigned to two of the war's deadliest jobs: working as a scout, running messages from headquarters to the front lines, and as a sniper.

After spending so much of his youth hunting, Pegahmagabow turns out to be a uniquely skilled sniper. He sneaks into No Man's Land under darkness, buries himself in cover and waits patiently until a German helmet fills his scope. It's this mix of patience and unerring aim that makes him the deadliest sniper on either side of the war, with 378 confirmed kills.

It's this mix of patience and unerring aim that makes him the deadliest sniper on either side of the war, with 378 confirmed kills.

He'll also survive the first chlorine gas attack at the Second Battle of Ypres — although the gas exposure causes irreparable damage to his lungs — and fights at the Somme, Passchendaele and Amiens.

By the time he is discharged in 1919, Pegahmagabow is the most decorated First Nations soldier in Canadian history. He is awarded the Military Medal in 1916 and earns two bars, becoming one of just 37 Canadians to win the Military Medal with two bars. He is also awarded the 1914-15 Star, the British War Medal and the Victory Medal.

But unlike his fellow soldiers, Pegahmagabow's fight does not end with the armistice. He's a decorated veteran, but when he returns to Canada, he remains an Indian: a "ward of the state," denied the rights of a Canadian citizen. He can't vote, and — as is the case with all First Nations people at the time — almost every aspect of his life, from his ability to leave the reserve to his military pension, is controlled by an Indian Agent, a powerful white bureaucrat assigned to oversee all Indigenous people in his jurisdiction.

In 1921, Pegahmagabow begins to advocate for change, first as a leader of his people. He's elected chief of what is today the Wasauksing First Nation and has frequent clashes with the area's Indian Agent, John Daly. He and his fellow band councillors embark on a letter-writing campaign seeking to increase the power of elected band leaders, but Ottawa insists they communicate only through Daly.

In 1945, Pegahmagabow is elected Supreme Chief of the Native Independent Government, an early Indigenous Civil Rights organization, and a precursor to the Assembly of First Nations.

By the 1950s, Pegahmagabow's war injuries are catching up to him. His lungs are so weakened from gas exposure that he sleeps sitting upright to keep them from filling with fluid. He dies of a heart attack in 1952.

Pegahmagabow's legacy lives on as an example of a life of service and determination, renowned for both his bravery as a soldier in the First World War and his ceaseless struggle for his people's rights.

Let me know if you can't see this video.  I may have to reduce the quality of the video to make the file smaller.

Plays very slow and in jerks with big pauses in between.  However, my computer has no sound these days.  I'm waiting for my wife's niece to come over and fix it.  I think I screwed up the sound program in the computer - it's not the connection to the speakers.

The pouch that the narrator was speaking of that Francis carried is called a ''medicine pouch''...Most First Nations and American Indians carry them into battle. They consist of items that are personal and private to the carrier, many times they have spiritual, family and or clan items in the pouch.

Yes, I carried one for two combat tours.

Thankfully it kept you safe.

See if this works for you Buzz.

Not much different - takes about a minute to start, then works for a couple or a few seconds, then pauses for 10 to 15 seconds, and over again, and then jumps to a picture of Arab women and stops there.