The intricacies of antisemitism in 19th-century France and today

This is the review of a new Roman Polanski directed movie.

The intricacies of antisemitism in 19th-century France and today


Some people will never feel comfortable seeing a movie by Roman Polanski again. There’s no way to spin the facts of his rape case in any way that exonerates him. And there’s no way to make Polanski’s absurdly self-serving statements while doing publicity for his new film, An Office and a Spy, any less infuriating. The movie is about the Dreyfus Affair and he compared himself to Alfred Dreyfus, saying he has been persecuted.

Whether to see his films in light of all this is a personal decision, but there is also no denying that he is one of the greatest directors working today and that he has directed several classics, among them Rosemary’s Baby and Chinatown. Even when he is not at his best, there is something compelling about his films, and even such movies as The Ghost Writer, Bitter Moon and Frantic have flashes of brilliance.


An Officer and a Spy is not a Chinatown-level film, but it is an excellent drama, so good that after the first five minutes, I forgot all about Polanski (although he does have a cameo in one scene). It explores the nature of corruption and the intricacies of antisemitism in ways that are as relevant to today’s world as they are illuminating about the history of the persecution of Jews in 19th-century France.

We all know the outcome of the Dreyfus Affair: After being framed for treason, the Jewish Captain Alfred Dreyfus was convicted and sent to Devil’s Island, only to be released after a public campaign spearheaded by Emile Zola and other intellectuals. The question of how new evidence that eventually exonerated Dreyfus came to light is the subject of An Office and a Spy, which is filmed with the tension and suspense of a well-paced police procedural.

It concentrates on the intricate story behind the affair rather than politics and ideology. Dreyfus (Louis Garrel) has just a few scenes in the movie. His conviction drives the plot, but he is not the focus. The movie centers on Colonel Georges Picquart (Jean Dujardin, who won a Best Actor Oscar for The Artist), a military intelligence officer who suspected that something was not quite right with the evidence that convicted Dreyfus.

Picquart, who knew Dreyfus, was not his friend and did not feel compelled to prove his innocence. Rather, once he came across facts that convinced him that Dreyfus could not be guilty, he was driven to find and stop the real traitor, who turned out to be Major Esterhazy (Laurent Natrella), who actually passed documents to the German military.

The details of how Picquart accomplished this are fascinating, as is the glimpse into the world of 19th-century spying, in which letters and handwriting were key. Army intelligence wasn’t a particularly high priority in those days, at least in the film’s telling, and in order to accomplish any rigorous work, Picquart had to fight both his superiors and the junior staff, many of whom did little more all day than piece torn letters together with pincers and glue, the 19th-century equivalent of hi-tech.


Picquart didn’t especially care for Jews and was not an intellectual, but he found himself at the heart of the political conflicts in the French government as he pursued his quest to get Esterhazy convicted. As his life and career are threatened, he becomes disillusioned with the values he had believed in until then. It’s the story of one man’s grappling with the evil of antisemitism and how his life – and the lives of those around him, including his married mistress (Emmanuelle Seigner, Polanski’s wife) – were affected by the corruption he exposed.

Dujardin, who often plays comic roles, gives the performance of his career here. He is surrounded by a wonderful gallery of character actors, many of whom come from French classical theater, who give the kind of supporting performances generally associated with the finest British films.

When we think about the Dreyfus Affair, we tend to think about Zola’s slogans and the arc of history, but Polanski shows how the devil – and often, at times, the angels – are in the most mundane details.

Having read the book "An Officer and a Spy" from which this movie was adapted, I am familiar with the story, and take note that it is centered specifically on Picquart's role in the Dreyfus Affair.  The story is also told in the classic movie "The Life of Emile Zola" which starred Paul Muni who did an exceptional acting job as Emile Zola.

One can disparage Polanski for the crime of which he is accused but for which he never stood trial, sympathize with him for his loss of the murdered Sharon Tate, but it does not take away from the exceptional talent he has in directing movies.

I believe the casting for this movie was excellent with respect to the actors' resemblance to the actual appearance of the historical individuals themselves.

This is a photo of the actual Captain Alfred Dreyfus. 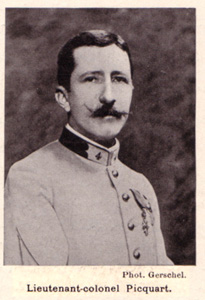 I may as well post all movie articles on the Front Page from now on, as they will most likely get more attention and be seen by more members (and the non-member public) than if they were posted on the Movies group (a useless endeavour, as are most groups).