According to Travis View, who has studied the QAnon phenomenon and written about it extensively for The Washington Post , the essence of the conspiracy theory is that

"Where we go one crazy, we go all crazy."

the so-called deep state who Trump will eventually expose and defeat.

Im sure no one knows what the hell you are talking about.

The president of the United States is OPENLY repeating debunked conspiracy theories.  He is mentally and psychologically unstable. Does anyone on NT care?

at least you're honest

Im sure no one knows what the hell you are talking about.

im sure of that... "most people are kind of dumb. this also expalins why hillary won the popular vote but not the EC

nothing has been debunked... unless "debunked" just means denied by the lamestream media.

just curious. how hard do you think it would be to get a picture looking from inside marine one looking out the door as trump is walking away from the helicopter?  exactly how many people have that kind of access?

whoever or whatever Q is, they have access to the president. period.

me personally... everything Q says is old news.

I've been watching the shit show since nafta was passed.

me personally... everything Q says is old news.

It's not "news". It's pure, unadulterated bullshit with exactly ZERO evidence to support any of their claims. All they have are innuendo, conjecture and cobbled together fantasy mixed with disparate half truths. Anyone with even a smidgen of self respect and education can see their conspiracy theories are akin to the fake moon landing and airplane contrail conspiracies.

Basically you're saying "Bigfoot, the Loch Ness monster, alien abductions and everything Q says is old news...". Do you believe everything you read in the National Enquirer? What do conspiring minds really want to know?

as in all things. time is my friend

I just love the fresh scent of communist style censorship in the morning...

speak your mind?    what a fukin joke

And all trump supporters lap this shit up and ask for seconds....sickening

We are living in sorrowful times.

You all know this conspiracy was a hoax to troll the media created on a gaming board?

It's the gift that keeps on giving!

You all know this conspiracy was a hoax to troll the media created on a gaming board?

8 ball will be sorry to hear that they didn't follow his notes.

any time you think you know me?  you will be wrong.

I don't care about Q  there is no news there for me.

here is the real question...

why is the media afraid to ask trump who Q is?

any time you think you know me?  you will be wrong.

Oh, I made that mistake of taking you at your word. My bad.

So it's ok for the president to tweet in support of hoaxes? lol.

Trump supporters and anarchists have no standards whatsoever. `

When you think it suits your purposes you will promote a conspiracy as "true". For example the lies that Pelosi's son and Kerry's son benefited from some sort of corrupt business in Ukraine.  Then when it all proved untrue you say it was just a hoax or a prank.

You and Trump deserve each other.

to troll the media

Tell that to all the believers. Are all those with Q bumper stickers, shirts and badges trolls ? I don't think so.

Those Q trolls are all over his twitter.  Pure propaganda and conspiracy theories, to be consumed by the Trumpers and confuse people not paying attention.

That's scary but not is scary as this, whites supremacy is everywhere!  Look at his hand, he's one of them! 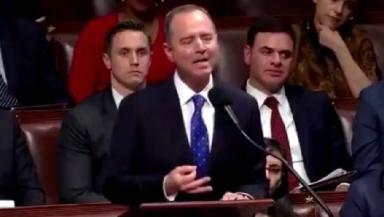 Where is the liberal outrage demanding he resign?

created on a gaming board?