Does the Lev Parnas Recording Company Have More Tapes of This President*? --- Trump could have just fired Ukraine Ambassador Marie Yovanovitch, but he got Rudy Giuliani's bagmen involved instead.

community » Discussions » Category » Op/Ed » Discussion » Does the Lev Parnas Recording Company Have More Tapes of This President*? --- Trump could have just fired Ukraine Ambassador Marie Yovanovitch, but he got Rudy Giuliani's bagmen involved instead.

In any event, the language from the White House is taking a turn toward what the Godfather script would have read like had it been written by Gilbert and Sullivan. CBS reported that someone at the other end of Pennsylvania Avenue warned Republican senators, “Vote against the president and your head will be on a pike.”


WASHINGTON—Friday was the last day that the House managers would “control the time,” as they say here in the world’s greatest deliberative body, and it was the day they dedicated to demonstrating their contention that the President* of the United States obstructed Congress to cover up the fact that he was blackjacking Ukraine to help him ratfck the 2020 election. Now, why would the president* do this, and what exactly was he covering up? I think it’s entirely possible that it was something like this, from   ABC News .

The recording appears to contradict statements by President Trump and support the narrative that has been offered by Parnas during broadcast interviews in recent days. Sources familiar with the recording said the recording was made during an intimate April 30, 2018, dinner at the Trump International Hotel in Washington, D.C. Trump has said repeatedly he   does not know Parnas , Soviet-born American who has emerged as a wild card in   Trump’s impeachment trial , especially in the days since Trump was impeached. "Get rid of her!" is what the voice that appears to be President Trump’s is heard saying. "Get her out tomorrow. I don't care. Get her out tomorrow. Take her out. Okay? Do it.”


It is possible that the president* was suggesting Parnas treat Yovanovich to a nice dinner and a movie, but I doubt it.

Instead, because he left his guts somewhere in Queens, he had to get Rudy Giuliani and his band of Volga Bagmen involved, which ultimately forced every one of them, including the president*, to lie and obstruct Congress and, thereafter, lie about how they obstructed Congress. They are the Gang That Couldn’t Obstruct Straight. So now it is clear that both Parnas and Igor Fruman, his partner in sleaze, have flipped like circus acrobats, and god alone knows what else will come out.   Who knows how many tapes   exist of the president* proposing who knows how many crimes? I would think, given recent developments,   the president*’s relationship   with Saudi Arabia might be a target-rich environment. 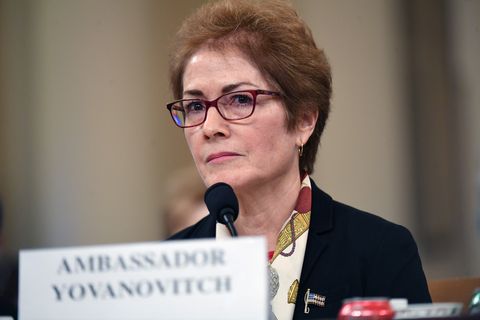 In any event, the language from the White House is taking a turn toward what the   Godfather   script would have read like had it been written by Gilbert and Sullivan. CBS reported that   someone at the other end   of Pennsylvania Avenue warned Republican senators, “Vote against the president and your head will be on a pike.” Meanwhile, a White House aide was   cruising the Senate hallways , mumbling about how he “can’t wait for the revenge.” I remain amazed by the salience of this argument. I honestly do not believe that the Trump operation, working on its own, could muster up serious primary challenges to five or six incumbent Republican senators at once. In the first place, there aren’t enough serious candidates willing to take that dive; there are more Roy Moores out there than there are Lamar Alexanders.

Second, I don’t think the Trump organization could beat Lisa Murkowski in Alaska. It can’t do anything at all to Mitt Romney in Utah or to Alexander, who’s halfway out the door anyway. Absent fanciful theories about mob hits or hidden   kompromat,   what are these people afraid of? Why does Lindsey Graham lose his goddamn mind every time he gets in front of a microphone? After spending a month screaming about the Bidens and Burisma,   Graham announced Friday   that he would   oppose   any effort to haul Hunter Biden in front of the Senate.

"I have said consistently that I am not going to grant witness requests from the defense. They could’ve called all these people if they wanted to in the House. They denied the president his day in court, and I’m not going to legitimize that. There are a bunch of people on my side who want to call Joe Biden and Hunter Biden. I want to end this sooner than later. I don’t want to turn it into a circus. I think Schumer said yesterday that they’re not willing to trade Joe Biden for anybody. I think I know why. I want the American people to pick the next president. Not me.”


Of course, that’s a bit of obstruction there, too, pending the next hit release from the Lev Parnas Recording Company.