“‘They fell,’ says our informant, ‘as grass before the sweep of the scythe.’ Little or no resistance was encountered, and the work of butchery was of short duration.

In his apology for  California’s genocidal treatment  of Native Americans, Gov. Gavin  Newsom focused attention  on the state’s nearly forgotten first elected governor, Peter Hardeman Burnett, and his declaration in 1851 that Indians would be exterminated.

As Gov. Newsom reported, Burnett infamously predicted to the 1851 Legislature: “That a war of extermination will continue to be waged between the races until the Indian race becomes extinct must be expected …”

As a writer of West Coast history, I became fascinated by Burnett and his little-known role in briefly allowing slavery while in Oregon and promoting exclusion laws against blacks in both Oregon and California.

I learned that throughout his political career, Burnett clung to a bizarre and deadly fantasy that the American West would be populated almost exclusively by whites. In Burnett’s vision, there would be no blacks, no Chinese and no Native Americans.

Burnett’s attitudes toward race no doubt were shaped in part by his family background. He was born in Nashville, Tenn., in 1807 and married into a slave-owning family. He owned two slaves in Missouri, and may have brought one of them to Oregon in 1843.

While a merchant in Tennessee, Burnett was responsible for the fatal shooting of a black slave who allegedly broke into his store.

In the one negative encounter with Native Americans mentioned in his autobiography, “Reminiscenses of an Old Pioneer,” he blamed Indians for setting a fire that destroyed his father’s farm wagon in Missouri.


In 1843, Burnett was one of the organizers and the first captain of the wagon train that brought nearly a thousand settlers from Missouri to Oregon in what became known as ‘”The Great Migration.”

He soon entered politics in Oregon, serving on the first elected legislature. Under his leadership, the Oregon Legislature enacted a law that excluded African-Americans. That law said African-Americans who refused to leave would face a severe lashing. Cooler heads soon overturned the Oregon law. A self-taught lawyer, he also served as the first supreme court judge of the provisional government of Oregon.

In November 1848, Burnett joined the gold rush to California, but soon tired of mining, and befriended and worked with John Sutter Jr. to help establish the city of Sacramento, making a great deal of money.

He evidently was instantly likable and persuasive, and wrote extensively for California newspapers, promoting civilian government for California. It didn’t hurt his political appeal he was also blessed with good looks. In his official portrait in the California State Capitol, he bears a resemblance to the late actor Paul Newman.

As governor, Burnett tried but failed to impose an Oregon-style law that would have excluded African-Americans.

He also sought to exclude Chinese immigrants because he believed they were better businessmen and workers than whites, and would dominate the economy, and later supported the federal 1882 Chinese Exclusion Act, which all but shut down Chinese immigration.

But it was California’s native tribes who suffered the most from Burnett’s attitudes and policies.

In calling for the establishment of week a “Truth and Healing Council’’ to investigate past abuses of California’s tribes, Newsom cited Burnett’s extermination prediction.

The genocide against California Indians neither started nor ended with Burnett. But some of the worst massacres of the native population occurred while he was in office. And he signed the deviously named 1850 “Act for the Government and Protection of Indians”

That became a convenient cover for seizing Indian lands, disrupting families and forcing many into involuntary servitude.

Article 2 of that law said: “Persons and proprietors of land on which Indians are residing, shall permit such Indians peaceably to reside on such lands.”

In other words, former Indian lands were legally controlled by whites.

Article 3 set out circumstances under which a Caucasian could take custody of a native child—until age 18 for males, and 15 for females.

As settlers and miners poured into California, moving onto traditional tribal lands, Indians not surprisingly responded by attacking them. Whites retaliated, frequently much more savagely.

Burnett twice ordered the state militia to respond to attacks, once at a ferry crossing near the confluence of the Gila and Colorado rivers in April 1850, and again near Ringgold in El Dorado County in October 1850. He urged communities to use poorly trained local militias to respond to attacks, with predictably bloody results and little if any accountability.

The worst of the conflicts during Burnett’s time in office was the so-called Bloody Island Massacre in May of 1850 in which about 75 U.S soldiers staged a retaliatory strike on several hundred probably innocent members of the Pomo tribe at Clear Lake in Lake County.

Estimates of the number of Pomo dead—men, women and children—ranged from 60 to several hundred. The massacre was described in the following account in the Daily Alta California of May 28, 1850:

“The troops arrived in the vicinity of the lake, and came unexpectedly upon a body of Indians numbering between two and three hundred. They immediately surrounded them and as the Indians raised a shout of defiance and attempted escape, poured in a destructive fire indiscriminately upon men, women and children.

1  seeder  Larry Hampton    one week ago

“‘They fell,’ says our informant, ‘as grass before the sweep of the scythe.’ Little or no resistance was encountered, and the work of butchery was of short duration. The shrieks of the slaughtered victims died away . . . and stretched lifeless upon the sod of their native valley were the bleeding bodies of these Indians—[n]or sex, nor age was spared; it was the order of extermination fearfully obeyed.”

Burnett’s official correspondence mentions some conflicts, but the Bloody Island Massacre is not among them, although he must have known about it.

Burnett’s term in office lasted just 13 months. He resigned on Jan. 9, 1851 after being ridiculed for such unacceptable proposals as demanding an exclusion law against blacks and promoting capital punishment for robbery and second degree larceny.

He was widely deemed by California’s press as ineffective. But his time in public life was not over. In 1857, Gov. J. Neely Johnson appointed Burnett to fill an unexpired term on the California Supreme Court, and he was elected again the following year, his transgressions as governor evidently forgotten

In 1858, while serving on the California Supreme Court, he was once again ridiculed for ordering a former slave named Archy Lee to be returned to his former Mississippi owner even though Lee had been living in California, a free state. His ruling was blocked by another court.

Burnett’s racism, along with several tone-deaf blunders, explains why he was, until recently, largely forgotten by history. He was an embarrassment. Many of the few schools that took his name as the first governor have changed their names as his policies have become known; among them is the former Burnett Academy in San Jose, the city where Burnett and his family settled.

He died in relative obscurity in 1897. Now, in 2019, Burnett is becoming known again, though surely not for reasons he would welcome.

The great California genocide took place, it was actually the second. The first was by the Spanish.

Ishi the last of his tribe. 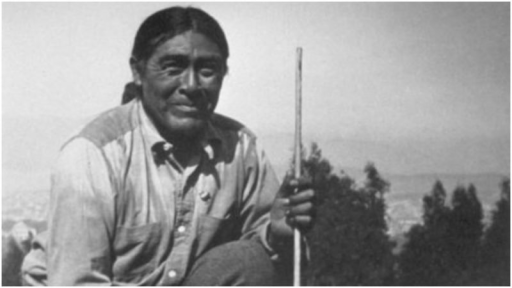 This is an awesome read, far worthy of it’s own seed. Thank you Kavika, fantastic!

This guy needs to run for President in 2024

Right on Trout, right on.

This guy needs to run for President in 2024

For Noting what everyone already knew from the past ?

He's definitely a "Saint" for doing that, for sure !

I misunderstand your comment. Could you please rephrase that to help me understand?

At present, there are 187 Native American tribes/rancherias in Cali (109 Federally Recognized).  Back in the 1850's, there were probably more.  It's amazing that only 18 treaties were written between 1851 and 1852.  But it is not amazing that the U. S. Senate ignored them and did not ratify nor bring them up for discussion.

Yeah, I suppose if the treaties are just going to be ignored, why make them?

A few years back I read through some of our older treaties with Indians. I got the feeling that many of them were written with no intention of ever honoring them. Pitiful.