Media organizations and press freedom advocates call the order for ABS-CBN to stop broadcasting an attack not only on the company, but on freedom of speech and the country's fragile democracy

Manila  — The Philippine government ordered the country's largest broadcast network, ABS-CBN, to stop broadcasting immediately on Tuesday after its license expired. The network, which employs about 11,000 people, went off the air on free TV and radio across the Philippines on Tuesday evening.

"This is in compliance with the cease and desist order issued by the National Telecommunications Commission (NTC) today that prohibits ABS-CBN from continuing its broadcast operations effective immediately," the company said in a statement.

Congress has sole authority in the Philippines to grant broadcast licenses, but lawmakers in the Lower House, who are overwhelmingly allied with President   Rodrigo Duterte , have declined to act on bills seeking the renewal of ABS-CBN's permit. Duterte has repeatedly stated his disdain for the network and the family who own it.

Critical coverage of the government's   controversial war on drugs   has angered the Philippine leader, but his gripe with ABS-CBN predates that, going back to the 2016 presidential election when he accused the network of refusing to run a number of his campaign's political ads.

Duterte accepted an apology from ABS-CBN President Carlo Katigbak in a Senate hearing in February. During those proceedings Philippine Justice Secretary Menardo Guevarra said the government could issue provisional authority to allow ABS-CBN to continue broadcasting while the network waited for official legislative approval of its license.

On Sunday, however, as journalists marked World Press Freedom Day, the Philippine government's top lawyer, Jose Calida, threatened to charge regulators at the National Telecommunications Commission (NTC) with graft if they went ahead with granting ABS-CBN a temporary permit. Calida had also filed a case asking the Supreme Court to invalidate the media giant's license. NTC officials have said they've no choice but to follow the law.

Media organizations and press freedom advocates call the order for ABS-CBN to stop broadcasting an attack not only on the company, but on freedom of speech and the country's fragile democracy. 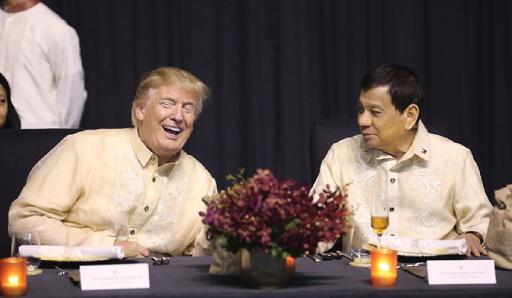 I wonder if he knows that the PI gets the internet?

SSSHHHhhhhh....Don't spoil the surprise; that's next!

Duterte is a current day equivalent of Ferdinand Marcos. I lived in the Philippines when Marcos was in power and was there during the revolution that saw him deposed. Marcos and his cronies controlled the media, the treasury, the police, and the military. I see little difference between the two.Duterte could eventually be looking at the same fate. Just a matter of how long it takes the Filipino populace to realize enough is enough like they did the last time.

Interesting viewpoint; thank you. I concur as well, it’s only a matter of time.

Unfortunately, it doesn't seem to stick. It's not like they didn't know that Duterte was corrupt or a tyrant. I think all too many in the PI still have a 'colonial' mentality. Official corruption is accepted, expected and sometimes embraced.