More Americans have died under Trump's watch in 115 days than all of the combat deaths in US wars since 1945 combined.

There is no "good news" to report on Trumpism...

President Donald Trump on Tuesday slammed the "Fake News" media for not putting a positive spin on his disastrous response to the coronavirus pandemic, which has led to over 120,000 reported deaths and devastated the US economy.

In a pair of tweets, Trump said, "We did a great job on CoronaVirus, including the very early ban on China, Ventilator production, and Testing, which is by far the most, and best, in the World. We saved millions of U.S. lives.! Yet the Fake News refuses to acknowledge this in a positive way. But they do give Dr. Anthony Fauci, who is with us in all ways, a very high 72% Approval Rating. So, if he is in charge along with V.P. etc., and with us doing all of these really good things, why doesn't the Lamestream Media treat us as they should? Answer: Because they are Fake News!"

Trump's depiction of his handling of COVID-19 is ahistorical.

In the early days of the virus, Trump ignored warnings from top experts and advisers of an impending pandemic, as he simultaneously downplayed the threat for weeks. On February 26, for example, as senior public health officials warned that coronavirus infections in the US would rise, Trump told the public that the number of cases would be "close to zero" in a couple of days. As of Tuesday, there were over 2.3 million reported cases of coronavirus in the US, per Johns Hopkins, the highest number of confirmed infections in the world by far.

Trump has also declined to follow his own administration's guidance when it comes to the virus, refusing to wear a mask or face-covering despite strong evidence it can help prevent the spread and save lives.

The US and South Korea had their first confirmed cases of coronavirus on the same day in January. The South Korean government responded swiftly and took the virus seriously from the start. The Trump administration reacted slowly, led by a president who refused to acknowledge the reality of the situation. South Korea has seen less than 300 reported deaths from coronavirus, while the US has the highest number of confirmed fatalities in the world.

Though Trump boasted about his travel restrictions on China in his Tuesday tweets, they were imposed after the virus had already reached the US. Moreover, roughly 40,000 people still came to the US from China after the restrictions were announced due to exemptions.

And though testing for the virus in the US has improved, a large part of the reason the country was hit so hard by COVID-19 is due to the fact it struggled to set up a robust testing system and lagged behind much of the world in this regard for weeks. This made it hard for officials to gain a picture of the full scale of the outbreak within America's borders.

The federal government aso struggled to provide essential medical supplies to states, leaving frontline health care workers in the wealthiest nation on the planet to wear trash bags as protective equipment in some cases. Some states accepted help or ordered supplies from other countries, including China.

Trump has also strongly condoned rapidly reopening the country, despite warnings from public health experts that doing so could exacerbate the US outbreak. States that were among the first to ease coronavirus restrictions, such as Texas and Florida, have recently emerged as hotspots. Trump has falsely blamed this on increased testing, even as rates of positive tests go down in other states like New York and New Jersey that were among the most hard hit in the country in the early days of the outbreak.

The president has spent much of the coronavirus pandemic deflecting blame instead of looking for solutions to a plethora of problems associated with the federal government's response. Former US diplomats have warned that his coronavirus response has left the US alone and embarrassed on the world stage, greatly damaging US credibility with other countries. And top public health experts have characterized Trump's handling of coronavirus as "abysmal."

The first reported coronavirus death in the US was 115 days ago, on February 29. In the time since, more Americans have died under Trump's watch than all of the combat deaths in US wars since 1945 combined.

Trump wants the media to discuss his coronavirus response in a "positive way," but doing so would be at odds with reality. Meanwhile, the virus continues to rip through communities across the US and the Trump administration has begun to behave as if the pandemic is a thing of the past...

There is no denying the abject failure of Trumpism!

The Trump Fluffers will deny all of his failings......   they can't help themselves.

Yet, they do not have any good news on Trump!

All they can do is lie about the competition now.

I bet Trump fluffer's jaws are aching by now!

So now Trump is mad at the media because it would not lie for him, and back up his lies for him.

Well I can tell you this:

Recently "many people" have stopped calling it :The Corona Virus" and have started calling it "The Trump Virus" because of the incompetant way he has dealt with it.

That I can tell you!

I have seen a few morons call it that.

Yes indeed-- "Many people" are saying it!

That I can tell you.

Care to explain why a country like Germany with similar medical and technical capability can have to date one-fourth of the deaths from covid when adjusted for population size as America?

The deaths happened on Trumps watch.

Care to explain why all those countries with the exception of Sweden that screwed up all the way around have their death rates holding steady while ours is still trending up? 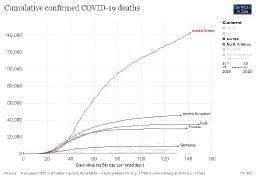 You should look at the latest data Sweden's case rate and deaths have drooped off a cliff. As of now they have a lower death rate from covid than both Italy and Britain.

Well Dean,  let's compare Sweden's number to their Nordic neighbors.  That negates things like environmental differences, and the number of tourist that might be carrying the virus:

. Trump has falsely blamed this on increased testing, even as rates of positive tests go down in other states like New York and New Jersey that were among the most hard hit in the country in the early days of the outbreak.

Yes-- and one heck of a lot more than people realize: 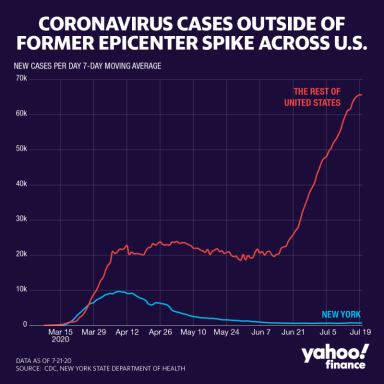 The whole response, or lack of it, to Covid has been a disaster since the beginning. Other countries have been getting a handle on it, but not us.

But the article says:

In a pair of tweets, Trump said, "We did a great job on CoronaVirus

Oh, well that changes everything then >sarc <

The administration has it under control. /s