Philosophers like to present their works as if everything before it was wrong. Sometimes, they even say they have ended the need for more philosophy. So, what happens when somebody realizes they were mistaken?

Philosophers like to present their works as if everything before it was wrong. Sometimes, they even say they have ended the need for more philosophy. So, what happens when somebody realizes they were mistaken? 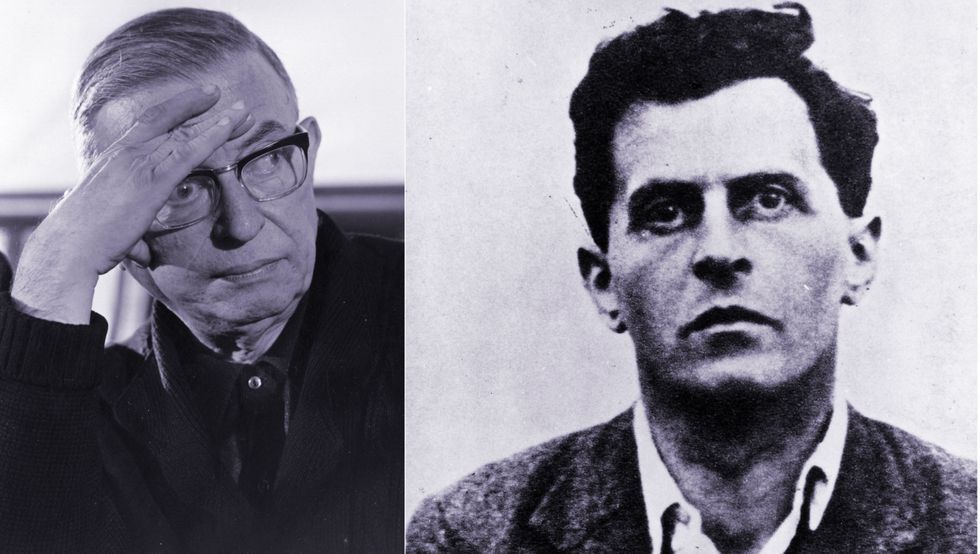 Sartre and Wittgenstein realize they were mistaken. (Getty Images)

Sometimes philosophers are wrong and admitting that you could be wrong is a big part of being a real philosopher. While most philosophers make minor adjustments to their arguments to correct for mistakes, others make large shifts in their thinking. Here, we have four philosophers who went back on what they said earlier in often radical ways.

Robert Nozick was an American philosopher who wrote on every subject he could get his hands on. He is well known for his lone venture into political philosophy; Anarchy, State, and Utopia. In that book, he argues for a minimalist state that never infringes on personal liberties. At one point, he even muses over how an income tax is akin to part-time slavery, as a worker is paid in wages and a part of them are given to the state without the chance to opt out. His ideal state wouldn't have any taxation.

In his later book The Examined Life , Nozick discusses topics from sex to death to politics. He reflects on his earlier book and declares "The libertarian position I once propended now seems to me seriously inadequate, in part because it did not fully knit the humane considerations and joint cooperative activities it left room for more closely into its fabric."

His adjustments to his earlier stances are subtle but notable. He doesn't fundamentally change his position but rather admits problems with it. He endorses the idea that the state can ban discrimination against various groups, admits that the realization of personal freedom may require mandated group effort, and yields to the use of taxation or mandated donation to specific charities as a means to assure society continues to function.

While in later interviews he assured readers that he had not abandoned libertarianism, he took the edge off a few of the more hard-line views as he aged.

Perhaps the most radical turn around on our list belongs to Wittgenstein; an Austrian philosopher in the 20 th century who published a single book during his lifetime, the Tractatus.

In Tractatus , he argues that when we are communicating with another person we are using words to put "pictures" in their minds. When I write "The glass of lemonade has two ice cubes in it," you can imagine what I mean rather cleary, if I used the right words. The book also endorses logical positivism and solved a few problems it had, which the Vienna Circle of philosophers was rather pleased about.

Wittgenstein was rather proud of his book and was convinced that he had solved philosophy with it by reducing all problems to semantics. He retired from writing for a few years as there was no more philosophy to do. He later changed his mind about that.
After his death, his other book was published. Philosophical Investigations expresses ideas he had in the later part of his life, often directly contradicting his early work. At one point in Investigations he even wrote " the author of the Tractatus was mistaken ," as he had moved so far away from his original positions.

In Investigations, Wittgenstein argues that language is a series of games. When we are speaking to somebody else we use particular words to convey a certain meaning. The only way they can hope to understand us is if they understand what rules we are currently playing by and exactly how the words are used in relation to those rules.

For example, if I write "He is a real chatterbox," I could be speaking sarcastically, literally, lying, or slightly exaggerating. You have to know what "game" we are playing to fully understand me. This is a far cry from the picture theory of the Tractatus and his denunciation of the earlier work discredited parts of logical positivism.

Sartre was one of the leading minds behind existentialism in the 20 th century. He wrote numerous books, essays, books, and plays describing his way of thinking and how we could learn from it.

In his earliest works, Sartre introduces us to the idea of our absolute freedom. While he admits that we are limited by some physical and social circumstances, he places us utterly in charge of ourselves and declares us " condemned to be free ". This kind of radical freedom is exemplified by the person who understands that they alone are responsible for their choices and knows that they have few limits on what they can choose to do.

While he always admitted that social, economic, and physical limits to our freedom existed, the limits he acknowledged became more numerous and restricting over time. This was due, in part, to the influence of his life partner Simone de Beauvoir and his increasing association with the French left.

His changes are less of a radical turn around in his thinking and more of an evolution in his understanding of the practical side of his work. However, as his understanding of how social and economic limitations on our freedom to choose increased he began to stop identifying as a pure existentialist and openly declared himself to have always been an anarchist. Quite a declaration for the man who brought existentialism together.

Meslier was a Catholic priest in 17 th century France. Noted as a quiet, dependable, and unremarkable priest, he served his parish for over forty years without complaint. After his death, a 600+ page book promoting atheism was found in his room, it has been published as " Testament ."

The reverend Meslier has the distinction of being the first atheist philosopher to write a text defending his position. In it he describes all religion as " a castle in the air, " and theology as " but ignorance of natural causes reduced to a system ." He found the problem of evil to be unsolvable, denied the existence of free will and the soul, and stated that the nobility and priests deserved to be slaughtered in the name of truth and justice.

He also makes the argument that Christianity, as it existed at the time, was merely a tool to assure the passivity of the lower classes against injustices they should be revolting against. He advocated for a proto-communism as a solution to social injustice.

While the question of how much of a turn around this constitutes is unknowable, he admitted in his text that he entered the seminary to please his parents, it does stand against his forty years of preaching Christianity. Nobody else on this list denounced forty years of work in a single book, and his rejection of it comes with a force that stands out despite his cumbersome writing style.

Something to think about. I've been wrong. Have you?

I've been wrong. Have you?

More seriously... thank you for posting something other than our usual pablum...

Sometimes I cringe remembering my youthful illusions! My disillusionment was not an event. It was a process. I highly recommend it...

I thought I was wrong once but I was mistaken.