A Tesla owner was caught sleeping while speeding down a Canadian highway. Police say the 21-year-old had his seats reclined all the way back and appeared to be sleeping while driving. Tesla's Autopilot has been blamed for causing driver inattention in the past.

'They are not self-driving systems, they still come with the responsibility of driving' 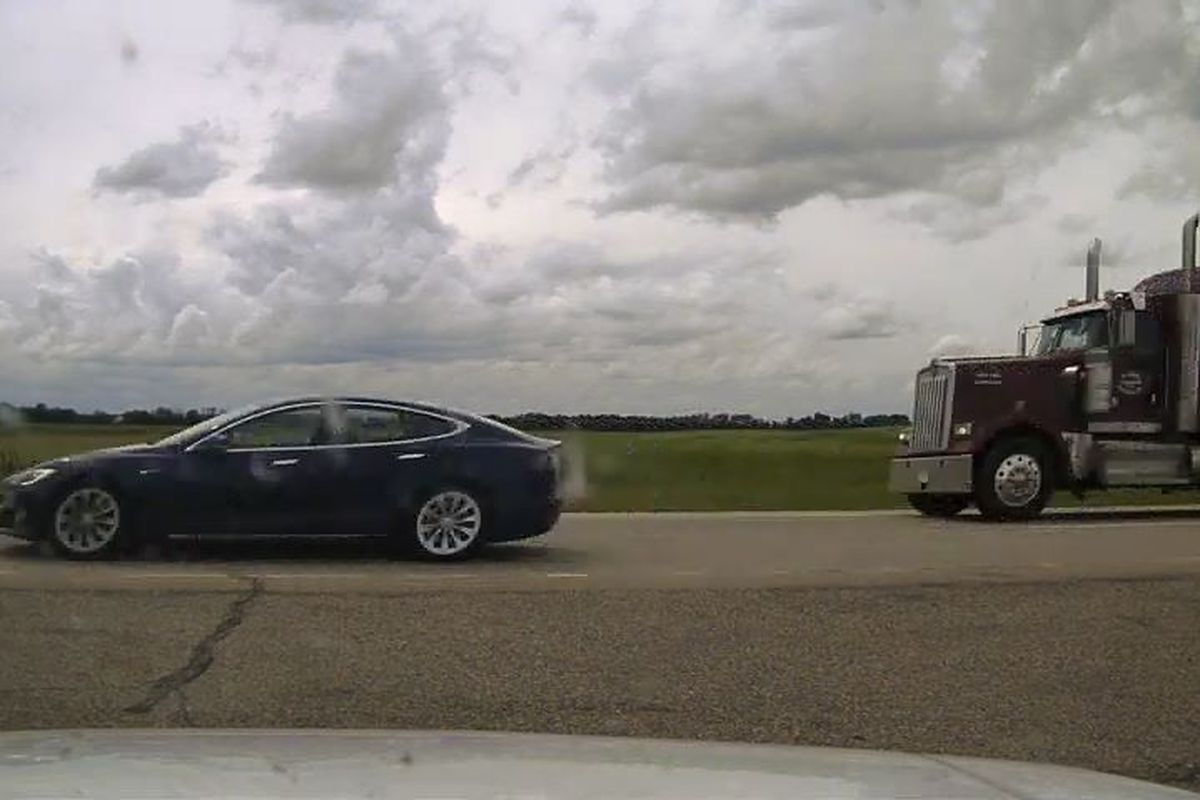 A Tesla Model S owner in Alberta, Canada, was charged with dangerous driving after being pulled over for sleeping while traveling at speeds of 150 km/h (93 mph). The case raises questions about Tesla's partially automated driving system, Autopilot, and driver complacency.

On July 9th, the Royal Canadian Mounted Police said they received a complaint of reckless driving on Highway 2 near Ponoka in Alberta. The 2019 Tesla Model S "appeared to be self-driving," police said, "traveling over 140 km/h, with both front seats completely reclined and both occupants appearing to be asleep."

Officers began to pursue the vehicle with their emergency lights flashing, at which point the vehicle "automatically began to accelerate," eventually reaching a speed of 150 km/h, police said. After pulling over the vehicle, the driver, a 21-year-old male from British Columbia, was charged with speeding and driving while fatigued, resulting in a 24-hour license suspension. Later, the man was also charged with dangerous driving.

"Although manufacturers of new vehicles have built in safeguards to prevent drivers from taking advantage of the new safety systems in vehicles, those systems are just that — supplemental safety systems," Superintendent Gary Graham of Alberta RCMP Traffic Services said in a statement. "They are not self-driving systems, they still come with the responsibility of driving."

A spokesperson for Tesla did not respond to a request for comment. Autopilot is a Level 2 partially autonomous system that combines adaptive cruise control, lane keep assist, self-parking, and, most recently, the ability to automatically change lanes. It uses a suite of sensors, including eight cameras, radar, and ultrasonic, to automate some of the driving tasks, but it also requires drivers to stay engaged with the vehicle in order to operate.

The automaker's Autopilot system has been proven by traffic investigators to have contributed to a number of fatal crashes in the past, and the families of deceased drivers have sued Tesla for wrongful death.

Tesla CEO Elon Musk has blamed crashes involving Autopilot on driver overconfidence. "When there is a serious accident it is almost always, in fact maybe always, the case that it is an experienced user, and the issue is more one of complacency," Musk said in 2018. But by marketing its system as "Autopilot," Tesla has been shown to encourage driver inattention.

It's unclear to what extent the Tesla owner in Canada was misusing Autopilot. Tesla has said the advanced driver assist system will only work when it detects a driver's hands on the steering wheel. If a driver's hands aren't detected, the display behind the wheel will begin to flash, followed by audible warnings, and eventually, Autopilot will disable itself.

Since its launch in 2015, Tesla owners have sought out new and creative ways to trick Autopilot. People couldn't wait to uploadvideos sitting in the backseat while their cars drove "autonomously" down the highway. Tesla responded by updating its software to require drivers to keep their hands on the steering wheel — which seemed like a smart fix until one driver figured out all you needed to do to fool the system was wedge an orange against the wheel to simulate the pressure of a human hand.

"Autopilot Buddy" was a piece of magnetic plastic that attaches to the steering wheel in order to create the impression that the driver is keeping his or her hands there. Federal regulators issued a cease and desist order to prevent its sale.

People love tricking technology, even if it could cost them their lives.

1  seeder  Release The Kraken    one month ago

Tesla is looking in to the speed acceleration after the police began to pursue the vehicle. Apparently nothing about the two passengers sleeping lol.

"We got two hosers sleeping while speeding"

Like, what the hell did anyone expect would happen? Did anyone really believe that drivers would put their cars on autopilot and not take a freaking nap?

As someone that works in the automotive world and works for a Tier one supplier to many OEMs for this high tech stuff; there's several warnings regarding "autonomous" functions. No vehicle is completely autonomous. I think Elon Musk is a moron for calling this system "autopilot." Clearly people have ignored the warnings and overridden the safety sensors. Lastly... how in the HELL does a 21 year old KID afford a Tesla???

I was driving a 97 Ford Ranger 5 speed. That was a serious upgrade from the previous car I owned which was a 1990 Escort GT with a 5 speed.

Maybe he's a youtube star or one of those influencers what ever the f that is.

I suppose it's possible. He's still a moron.

Officers began to pursue the vehicle with their emergency lights flashing, at which point the vehicle "automatically began to accelerate,"

mmm..who put that feature in?

I have always wonder why we make cars that can go faster than the speed limits.

I have always wonder why we make cars that can go faster than the speed limits.

That's why we shouldn't have speed limits. People ignore them, they are useless.

we shouldn't have speed limits.

But speed limits have changed drastically... in MI, the speed limit used to be 55 mph max. Now, on most freeways it's 70 mph. There are some highways that have signs that say, "Speed Limit Ends" and that means that the road is rough, but you can go as fast as your car will allow without falling apart.

I don't think anyone ever does 55 mph in MI even though some state highways have it as a speed limit. Example: M39 (aka Southfield Rd / Hwy) is 55 mph, but if you do 55 mph, you'll get ran the eff over by even semi trucks. Even the out of state semis will do 65 mph. Cars or those in the left lane... 70-80 mph. On I696... if you're doing 80 mph, you're getting passed even though the speed limit is only 70 mph. However, as soon as us Michiganders cross into Ohio, we slow the eff down, because Ohio state troopers will pull us MI people over quicker than the blink of an eye.

You are much younger than me.  I learned to drive in the early 70's and the speed limit in Michigan was 70 mph so of course everyone drove at 75 or 80 mph.  Unless it was a whiteout snowstorm, anyone driving under 70 was heavily frowned upon.

Then the speed limits where dropped and radar detectors became very popular.

Oh... and it only takes a SW engineer 5 min to modify the code just bit for auto acceleration.

Well maybe the Tesla was set for American roads and didn't realize it was in Canada.  I remember (way back in the day) I was up at Cold Lake AFB in Canada for a joint exercise with Canadian and British airmen. A few of us one evening went off to a club in a nearby town for a live band and some fun. I ended up driving one of the cars back to base as we had all had a bit to drink and the owner of the car didn't feel safe to drive.

Now Canada has these great big white signs showing the speed limits, just like we have here in the US. I was driving down the road and the sign said 80 so I was doing 80mph. Came around a relatively easy curve but due to the speed (Canada had gone metric so that speed limit was actually 80 kph) I drifted a bit wide on the curve. As luck would have it, the Mounties were coming the other direction, so of course they turned around and pulled us over before the front gate.

They were all very nice about it. Once I handed over my drivers license and they saw I was a Yank, they let me go with some good-natured ribbing (I hadn't been drinking heavily that night so was rather sober when they pulled us over unlike the passengers who were all asleep) and reminded me that if it felt like I was driving too fast I probably was.

But yeah,  maybe the driver forgot to switch the Tesla into Canadian mode before he nodded off for his nap.

Not the first case of this happening with one of these so called "self driving" vehicles.  Just goes to prove that the world is full of idiots.

Canadians have to be able to drive in all road and weather conditions, but driving while asleep isn't one of them.