In what organizers called an 'Indigenous Peoples Day of Rage', the two statues were torn down in the space of 10 minutes by protesters who toppled the monuments and defaced the plinths in Portland.

But of course the left will proclaim these to be nothing but "mostly peaceful protests" neglecting the wanton destruction and desecration of American history.

Lincoln and Roosevelt had their individual issues, but their overall benefit to America needs to be recognized.

Donald Trump today raged at the 'animals' who tore down statues of Abraham Lincoln and Theodore Roosevelt in Portland last night as rioting returned to the city on the eve of Columbus Day.

Trump condemned the protesters as 'Antifa radicals' and 'Biden fools', urging the FBI to 'get them' and calling on Portland to send for federal troops.

'Put these animals in jail, now,' said Trump. 'The Radical Left only knows how to take advantage of very dumb 'leadership' fools. This is Biden! Law & Order!'

In what organizers called an 'Indigenous Peoples Day of Rage', the two statues were torn down in the space of 10 minutes by protesters who toppled the monuments and defaced the plinths before smashing windows at the city's Historical Society.

Lincoln was condemned by protesters over the hangings of 38 Native American warriors who were executed on his orders after an uprising in 1862 - although he reprieved hundreds of others.

Roosevelt was blamed for 'stolen land' after the 26th president championed the idea of 'manifest destiny', once saying that 'I don't go so far as to think that the only good Indians are dead Indians, but I believe nine out of 10 are'.

Donald Trump raged at the statue topplers on Monday morning, calling for 'these animals' to be put in jail and urging the FBI to 'get them'

How Lincoln had 38 Sioux fighters hanged and saved 265 others

Abraham Lincoln is best known for freeing the slaves and winning the Civil War, but the hangings of 38 Sioux warriors after an uprising in 1862 mean he is no hero to Native Americans.

The Sioux went to war because they believed their land and homes were being stolen by white settlers in Minnesota and nearby territory, and were aggrieved by late payments from the government.

The uprising, also known as the Dakota War, lasted six weeks and killed hundreds of soldiers, settlers and Native Americans before the Sioux surrendered to Lincoln's forces.

In the aftermath, a military commission sentenced 303 Sioux people to death after trials in English with no defense attorneys which lasted only three to five minutes and which the Sioux people did not understand.

Lincoln reviewed 'every one of these capital cases, his biographer Harold Holzer says, and decided there was evidence that 39 of them were guilty of murder or rape and ordered their execution.

The remaining 264 sentences were commuted, while one of the 39 condemned men was later reprieved.

But the other 38 were hanged in Mankato on December 26, 1862, in the largest mass execution in US history - just days before the Emancipation Proclamation.

The remaining Dakota people were driven out of Minnesota after the war. Most ended up in Nebraska, South Dakota, North Dakota and Canada.

The 'Day of Rage' was timed for Monday's federal holiday named after Columbus, whose arrival in the Americas in 1492 unleashed centuries of colonization.

Despite threats of arrest by Portland police, protesters threw chains around Roosevelt's statue and daubed it in red paint before using a blowtorch on its base.

The statue, officially called Theodore Roosevelt, Rough Rider, was pulled down just before 9pm and the plinth defaced with a message raging at 'stolen land'.

Roosevelt's steed was also defaced with a sticker demanding the abolition of the Portland police department.

The group then turned their attention towards Lincoln's statue, pulling it down around eight minutes later.

The protesters spray-painted 'Dakota 38' on the base of Lincoln's statue, referring to the Sioux warriors executed after fighting white settlers in the Dakota War of 1862.

After a military commission sentenced 303 Sioux fighters to be executed, Lincoln commuted 265 of their sentences but ordered the remaining 38 to die.

Lincoln, who also freed the slaves, is said to have reviewed 'every one of these capital cases' and gone against the warnings of fellow Republicans by showing clemency.

However, the trials took place in an extreme hurry and the Native Americans were denied counsel and did not understand what was being said.

The eventual hangings in December 1862 were the largest mass execution in US history.

Two decades later, Theodore Roosevelt made his infamous remark about 'dead Indians' in an 1886 speech where he added: 'The most vicious cowboy has more moral principle than the average Indian.'

'The truth is, the Indians never had any real title to the soil,' Roosevelt wrote in his book The Winning of the West.

As president, Roosevelt scoffed at the pleas of Native American leader Geronimo to be allowed to return to Arizona from an Oklahoma reservation.

'You killed many of my people; you burned villages… and were not good Indians,' Roosevelt told him.

Lincoln's plinth was spray-painted with the words 'Dakota 38', a reference to the number of Native American warriors executed on his orders in 1862

A protester stands over the toppled statue of Theodore Roosevelt, who made in infamous remark in 1886 that 'I don't go so far as to think that the only good Indians are dead Indians, but I believe nine out of ten are'

Theodore Roosevelt expressed hostile views towards Native Americans and believed in the idea that the US had a 'manifest destiny' to dominate the continent.

Roosevelt said in an 1886 speech that 'I don't go so far as to think that the only good Indians are the dead Indians, but I believe nine out of every 10 are and I shouldn't like to inquire too closely into the case of the tenth'.

In other writings and speeches, he described white people as 'the forward race' and native African people as 'wild pagans'.

And in his book The Winning of the West, he argued that 'the Indians never had any real title to the soil'.

As president, he invited a handful of Indian chiefs to his inauguration parade in 1904 in an attempt to 'bury the hatchet'.

But he summarily rejected one chief's pleas to return to Arizona, saying that his people had not been 'good Indians', after they were kept captive on an Oklahoma reservation.

Roosevelt's famous conservationism, which led him to put more than 230million acres of land under federal protection, also jarred with Native Americans who saw it as their land.

Conversely, Roosevelt was the first president to invite a black man, Booker T. Washington, to dine at the White House - causing a wave of bigoted outrage.

Earlier this year, a statue of Roosevelt with 'very subservient' African and native figures was removed from the American Museum of Natural History in New York.

The museum said Roosevelt had a 'complicated and sometimes troubling history' but was 'widely considered one of the most important American presidents'.

In Portland, after toppling the statues, the crowd began smashing windows at the Oregon Historical Society and later moved onto the Portland State University Campus Public Safety office.

The Historical Society director told KGW News that 'it's just so unfortunate that this prevents people from coming people and seeing the history of Oregon'.

Police later declared the event a riot, a frequent occurrence in the months-long Portland protests, and ordered the group to disperse.

Cops said anyone involved in 'criminal behavior, including vandalism' was subject to arrest, but it was unclear if any arrests had been made.

Statues of Columbus himself have come down across the US in recent months, some toppled by protesters and others removed pre-emptively by city authorities.

One Columbus statue was beheaded in Boston amid the George Floyd protests while another was torn down and thrown in a lake in Richmond, Virginia.

The empty pedestal in Richmond was spray-painted and covered with a sign saying 'Columbus Represents Genocide' after the statue was set on fire and taken down.

Elsewhere, Chicago had a Columbus statue lifted out of Grant Park under cover of darkness after mayor Lori Lightfoot ordered its removal.

The statue had already been covered in plastic wrap to protect it from vandals and was at the center of violent scenes a week earlier which left 49 cops injured.

Several Italian American leaders in Chicago said the community was unhappy with the decision.

However, Columbus is seen by many as a symbol of racism and oppression, and some people mark Columbus Day as Indigenous Peoples' Day instead.

Portland has been one of the longest-running flashpoints in the racial injustice protests which erupted after Floyd's death in May.

Cops have repeatedly clashed with demonstrators outside the federal courthouse and police buildings, with 27 riots declared in four months.

Hundreds of demonstrators have been arrested, and Donald Trump sparked anger by dispatching federal agents to the city in a bid to quell the violence.

The federal troops were withdrawn in late July but Trump has warned since then that 'we will go in and do it for them' if city authorities do not subdue the protests.

Last month protesters hurled firebombs at officers amid nationwide protests after no cops were charged with killing Breonna Taylor in Louisville, Kentucky.

Of course this was done "peacefully" by the lowlife scumbag thugs prowling the streets of Portland that have been abandoned by the people elected to safeguard them.

Time to remove the Lenin statue in Seattle so we can watch some sexually confused soy boys cry.

Good happy to see the statues of Columbus and Roosevelt toppled.

Good happy to see the statues of Columbus and Roosevelt toppled.

What a dumb idea. Rather than create a unique holiday that actually does celebrate and honor a person or people, Indigenous Peoples Day is rooted in a misguided and irrational hatred of a person (Columbus). I can't imagine why anyone would want to take part in something so dark.

I'll be glad when those who ripped down the statues are convicted and sentenced to the mandatory 10 years.

At first it was just confederate statues. Then they toppled a statue of a union soldier in denver. They also got to a statue of ghandi. A statue of chris cornell (soundgarden singer) in seattle suffered damage. Thomas jefferson and george washington. Now lincoln and roosevelt. And there are probably some i missed.

hey asswipes, while you’re busy erasing history, erase the history of slavery so we can be done with this stupid shit. 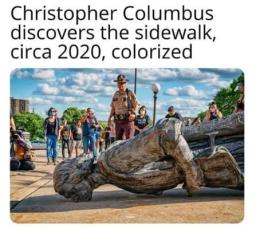 I wonder how proud the idiots parents must be to see their kids being so dense, destructive, and general assholes.

Probably very proud. They probably taught their kids their own ideology.

idiots seem to be quite plentiful in Portland.

They are a lot worse than idiots. They are criminals.

I, for one, see nothing wrong or illegal with peaceful protesting, but I despise rioting, looting, damaging public and/or private property whether it happens in the USA, Canada, or Hong Kong.  I ENCOURAGE the police to arrest, charge, convict and imprison ANYONE who does or even attempts to do such violent acts.  Toppling those statues just defeats any semblance of mature, intelligent conduct on the part of the perpetrators notwithstanding the cause - just damaging their cause by doing so.