Trump can see his reelection chances in his rearview mirror! 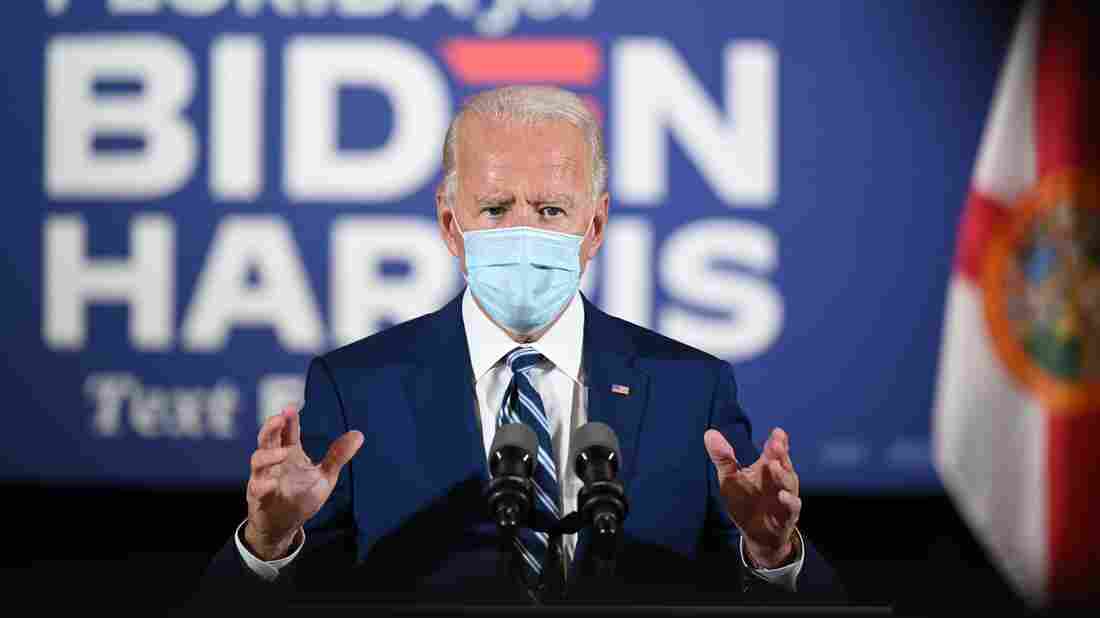 With less than three weeks to go until Election Day, Democrat Joe Biden has taken a double-digit lead over President Trump, according to the latest NPR/ PBS NewsHour /Marist poll.

The former vice president leads Trump 54% to 43% among likely voters in the poll. It's the highest level of support Biden has achieved since the poll began testing the head-to-head matchup in February. Biden has never been below 50% in the question in the Marist poll, and Trump has never been above 44%.

Trump won 46% of voters in 2016 nationally, but it was enough for him to squeeze out a victory in the states key to the Electoral College. Biden has pulled ahead in several key states, including Wisconsin, Michigan and Pennsylvania, which were crucial to Trump's victory in 2016. But Trump is within striking distance.

Biden continues to have an advantage with Black voters, Latinos, whites with a college degree, women, people who live in cities and suburbs, young voters and independents.

Notably, Biden is leading in this survey with white voters 51% to 47%. That is extraordinary. Trump won white voters in 2016 by 20 points. Biden's 51% among white voters is the highest for a Democrat dating back to Jimmy Carter in 1976, when the U.S. was far less racially diverse.

If Biden does, in fact, win that level with whites, it would indicate that a very large wave is building for Democrats up and down the ballot.

Trump's strongest groups continue to be white evangelical Christians, rural voters and whites without college degrees. But Trump's advantage among whites without a degree is down a net of 19 points from last month.

Biden's widened lead comes on the heels of Trump's erratic first debate performance, the vice presidential debate and Trump's contracting COVID-19. By a 53%-to-35% margin, likely voters say Biden and his running mate, California Sen. Kamala Harris, benefited more from the debates than did Trump and Vice President Pence.

Even a quarter of Republicans say the Biden-Harris ticket benefited more or they're unsure.

Trump's presidency seen as a failure

A slim majority — 52% — of likely voters say Trump's presidency has been a failure, compared with 45% who say it has been a success.

Americans also largely view Trump negatively. In an open-ended question, respondents were asked to describe the candidates in one word.

For Trump, the word that stands out is "incompetent," while for Biden it is "honest." 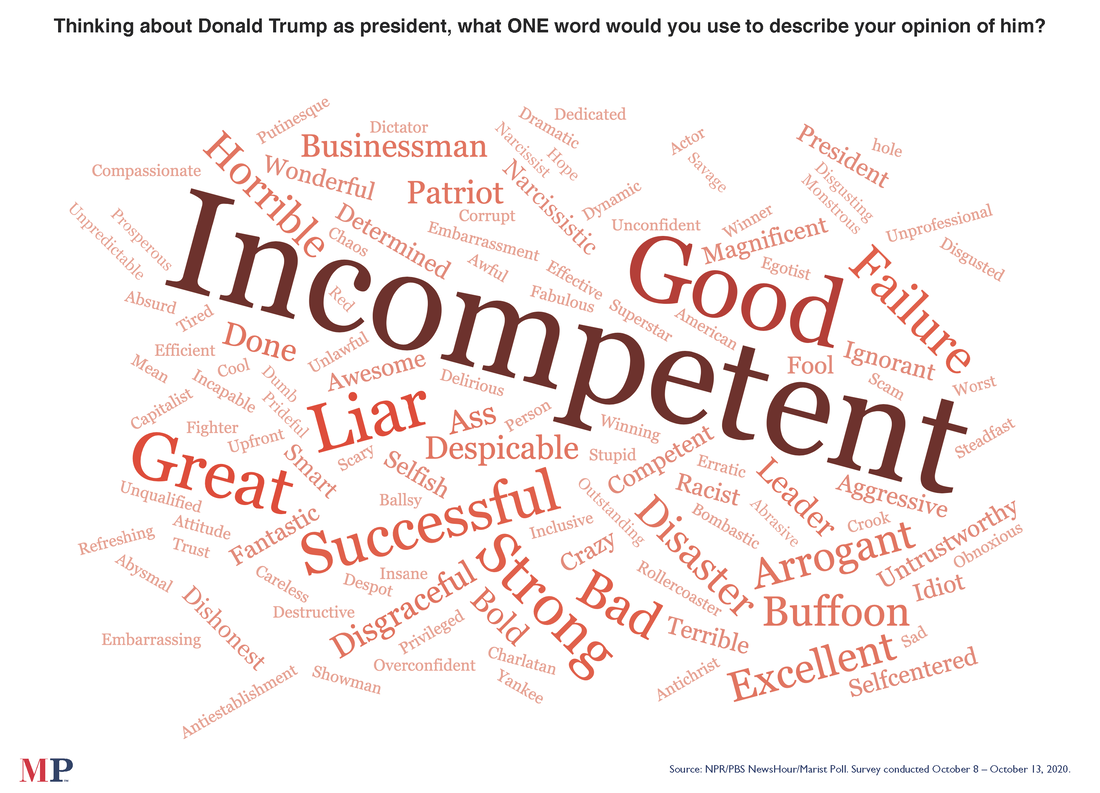 To be clear, both candidates have a range of words ascribed to them that are positive and negative.

For Trump, on the positive end, people said he is "good," "great," "successful" and "strong." On the negative side, "incompetent" was overwhelmingly the most common word used, followed by "liar," "failure," "bad," "horrible," "disaster," "arrogant" and "buffoon."

The positives ascribed to Biden include, for example, "honest," "confident," "hopeful," "good," "trustworthy" and "compassionate." 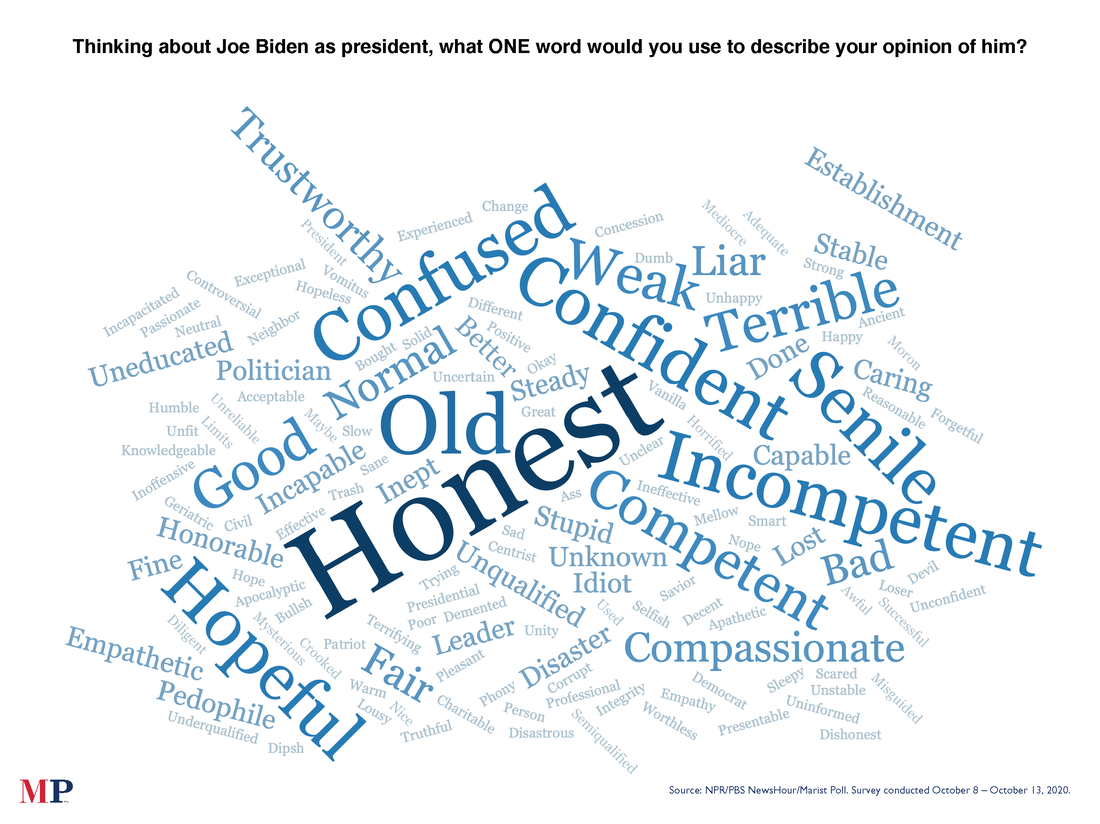 The NPR/ PBS NewsHour /Marist poll asked what word comes to mind when thinking about former Vice President Joe Biden as president. The word "honest" stood out, but there were plenty of negatives too. NPR/PBS NewsHour/Marist poll hide caption

Not many persuadable voters

Trump has inspired strong and polarizing feelings in the country.He has just a 43% job approval rating, and 47% of likely voters say they strongly disapprove of the job he's doing.

That means there are few undecided voters. In fact, in this survey, just 5% of voters are persuadable — those who are undecided or who support a candidate but might vote differently.

Trump's advantage continues to be strength of support: His supporters are more strongly committed to him than Biden's, with 87% of Trump voters expressing a firm commitment, compared with 74% of Biden's backers.

Biden leads on who's best to handle multiple issues

Biden has significant advantages among likely voters when it comes to handling the coronavirus pandemic and race relations, while voters are split on who's best to handle the economy.

On the pandemic, likely voters say they prefer Biden to handle it by a 55%-to-41% margin. On race, it's an even wider 56%-38% advantage for the former vice president.

On the economy, voters are split — 47% say they prefer Trump to handle the economy, while 48% say Biden. That's slightly tighter than the 50%-46%edge for Trump on the economy last month. The economy had been one of Trump's strengths, but since the coronavirus pandemic shut down much of the economy, Trump's ratings have suffered some.

How people intend to vote

Almost two-thirds of likely voters say they think there will be many or some attempts to intimidate or prevent legitimate voters from voting.

Most —58%— are confident the U.S. Postal Service will deliver election-related mail to voters and election officials in a timely manner.

But Biden leads78% to 21%with voters who have already voted.

Those are important factors to keep in mind as vote tallies roll in on election night, since more than 17 million Americans have already voted.

Views of the coronavirus and the president

Democrats and independents overwhelmingly say it's a real threat.

Only 36% of likely voters say theytrust what they're hearing from Trump on the virus a great deal or a good amount; 63% say they don't trust what they hear from the president very much or not at all.

By a 47%-to-40% margin, more likely voters support Judge Amy Coney Barrett's nomination to the Supreme Court than don't. Three-quarters of Democrats oppose it, 9 in 10 Republicans support it and independents are split, with a fifth undecided.

A majority of Democrats and a third of independents think she should not be confirmed at all.

Trump can wave bye-bye to his reelection chances!

I wish there were a way of determining and comparing the average IQ of those who support Trump with those who support Biden, or the diference in education levels.  I have a pretty good idea of which would be higher.