I believe in the president, now more than ever

community » Discussions » Category » Op/Ed » Discussion » I believe in the president, now more than ever

I believe, more than ever, in the president.

I believe Sleepy Joe Biden and that "monster" Kamala D. Harris would turn America into a "socialist hellhole," and we'd all have "to speak Chinese." I believe they "want to take out the cows" and "any form of animals." There will be "no airplanes," they'll "rip down the Empire State Building," and we'll only have "little, tiny windows."

I believe Sleepy Joe leads an "organized crime family." I believe he and President Barack Obama committed "the greatest political crime in the history of our country," and it will be "a very sad, sad situation" if the attorney general doesn't indict them.

I believe Hunter Biden is a criminal, because someone got hold of his "laptop from hell," and because of some guy named Bobulinski, whoever he is. I believe Fake News reporters are also criminals because they won't report this.

I believe the laptop didn't come from Russian intelligence. I believe Hunter Biden flew from his home in Los Angeles to Philadelphia, and then took a train to Delaware, because he needed a legally blind repairman there to fix his laptop. I believe Rudy Giuliani when he says the odds are "no better than 50/50" he worked with a Russian agent to dig up dirt on the Bidens.

I believe "the president knows all about this" dirt-digging, so all the dirt must be true. I believe Giuliani may have been duped by fake Kazakh rubes but could never be conned by real Russian spies.

I believe Giuliani was just tucking in his shirt.

I believe the president doesn't know much about QAnon other than "they like me very much," and that it's not "a bad thing" they are "very much against pedophilia." I believe people should be able to make up their own minds whether Biden had Seal Team Six killed to cover up the faking of Osama bin Laden's death.

I believe the president is the "least racist person" in any room he's in. I believe it was fine for him to tell the Proud Boys to "stand by," because "somebody's got to do something about antifa and the left." I believe "corona" sounds like a "beautiful seaside island in Italy," and so we must say "China plague."

I believe the president has already announced his new, "incredible" health care plan, and it's something "nobody has seen . . . before." But I believe if it hasn't been announced yet, it will be "very soon," perhaps in two weeks. I believe that the president will improve on Obamacare by getting the Supreme Court to "end it," which would be "so good."

I believe it was the strategy of a stable genius for the president to urge Congress to pass a stimulus bill, and then, three days later, refuse to negotiate one, and then, seven hours after that, demand Congress "IMMEDIATELY Approve" one.

I believe the president was "not looking to be dishonest" about the China virus and that he played it down because he didn't want "to create a panic." I also believe he "up-played" it. I believe he doesn't and shouldn't "take responsibility at all" for his handling of it, but that he does take "full responsibility" and that it's not his fault.

I believe the virus "affects virtually nobody," and that the death count would be "very low" if we didn't count Democrat states. I believe doctors and hospitals have overcounted deaths because they "get more money" for doing so.

I believe we're "rounding the final turn" with the virus and that we have more new cases than ever because we have "the best testing in the world by far." I believe other countries test only "when somebody comes into the hospital and throws up all over the floor."

I believe we will develop "herd mentality," which will make the virus "go away." I believe a vaccine is "ready," coming "momentarily," "within weeks." And I believe Deborah Birx is "Pathetic!" for saying the virus was "extraordinarily widespread," that Anthony S. Fauci, who has "been here for 500 years," is a "disaster," and that all the scientists are "idiots."

I believe the Fake News people are "dumb bastards" because "all they cover" is "covid, covid, pandemic, covid, covid," because "they're trying to scare everybody" from voting. I believe it "should be an election law violation!" I believe that "on November 4, you won't hear about it anymore."

I believe "the Fake News only shows the Fake Polls." That includes Fox News, whose polls are "totally FAKE." I believe a "SILENT MAJORITY!" supports the president - look at all those boaters. I believe he has a 96 percent approval rating among Republicans - up from 93 percent, 94 percent and 95 percent.

I believe "the ballots are out of control," and people should vote by mail and then vote again in person, to test the system. I believe the only way the president will lose "is if the election is rigged" and that he's right not to commit to a peaceful transfer of power.

I believe the president will not only win, but he'll also "negotiate" a third term, which he's entitled to because Obama and Biden spied on him.

I believe that if the president somehow does lose, he might "have to leave the country." I believe he probably should.

The writer is a lawyer in New York and an adviser to the Lincoln Project, an anti-Trump super PAC

I believe Trump supporters are ruining our country.

Is this the George Conway that's married to Kelly Anne?

Thought so, but had to check.

George is writing in sarcasm font

I believe he has a 96 percent approval rating among Republicans - up from 93 percent, 94 percent and 95 percent.

This is the closest statement to being accurate in the whole op/ed, unfortunately.

Yet somehow they all manage to "think for themselves"  lol 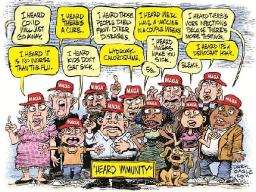 So all of this from Guiliani, who has been compromised by Russian intelligence...

Isn't this so called source a Russian name?

You can't make this shit up...