Biden has already set a record for the highest number of votes for a winning presidential candidate, and President Donald Trump has also notched a high-water mark of the most votes for a losing candidate. With more than 155 million votes counted and California and New York still counting, turnout stands at 65% of all eligible voters, the highest since 1908, according to data from The Associated Press and the U.S. Elections Project.

The rising Biden tally and his popular vote lead — nearly 6 million votes — come as Trump has escalated his false insistence that he actually won the election, and his campaign and supporters intensify their uphill legal fight to stop or delay results from being certified, potentially nullify the votes of Americans.

"It's just a lot of noise going on, because Donald Trump is a bull who carries his own china shop with him," said Douglas Brinkley, a presidential historian at Rice University. "Once the noise recedes, it's going to be clear that Biden won a very convincing victory."

Biden currently has an Electoral College lead of 290-232. But that does not include electors from Georgia, where Biden leads Trump by 0.3 percentage points as officials conduct a hand tally. The AP has not called the race, but if Biden's lead holds he will win the Electoral College on 306-232 vote — the identical margin Trump won in 2016. Back then Trump described it as a "landslide."

That slimmer win, however, is still decisive by election law standards, notes Rick Hasen, a professor at the University of Irvine and an expert on voting.

While Biden's margins in states like Arizona and Wisconsin seem small — between 12,000 and 20,000 votes — those races aren't nearly narrow enough to be considered likely to flip through a recount or lawsuits. Recounts typically shift total votes by only a few hundred votes. In 2000, the Florida recount and legal battle for the White House was prompted by a 537-vote margin.

Timothy Naftali, a presidential historian at New York University, has compared Biden's still-growing popular vote and Electoral College margins to those of every winner of a presidential election since 1960. His finding: Biden's win was right in the middle — tighter than landslides like Barack Obama's 2008 win or Ronald Reagan's 1984 wipeout reelection, but broader than Trump's 2016 victory or either of George W. Bush's two wins.

The closest analogy was Obama's reelection, which he won by virtually the same margin as Biden has now.

Despite that, Trump and his allies are continuing to try to stop certification of the election, in a longshot attempt to deny states the ability to seat electors supporting Biden. These efforts are very unlikely to succeed, but they reached a new pitch this week when two Republican members of the board of canvassers in Michigan's largest county Tuesday night managed to block certification of the votes there. They allowed certification to proceed after an outcry, but it was a sign of how deeply Trump's baseless claims of mass fraud have permeated.

In fact, argued Michael McDonald, a University of Florida professor who tracks vote counts for the U.S. Elections Project, the relatively narrow Biden wins in battleground states tell a different story than the one the president is pushing.

Democrats have worried that the gap between the popular vote and the Electoral College tallies is growing as Democratic voters cluster on the coasts and outside of battleground states. That dynamic could make it difficult for Democrats to win congressional races, creating a lasting disadvantage when it comes to advancing policies. 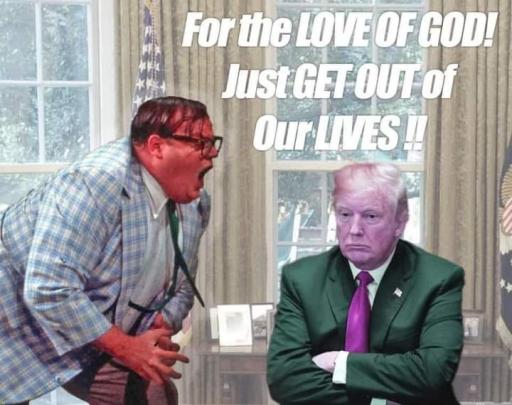 You would think that a record number of voters in a very trying time (pandemic) would be something to celebrate. The work of poll workers, those counting ballots, and the poll watchers from both parties did a great job under very trying times and at times had to deal with threats and harassment.

These are the things and people that should be celebrated.

Kudos to them all it's what America really is.

I still think Biden may have to order him hauled off...