The letter accused Carone of falsely "pretending to have some sort of 'insider's knowledge'" after having been hired to conduct "menial tasks."

In early December, Melissa Carone became the subject of fascination - and a "Saturday Night Live" skit - after she appeared as a witness for Rudy Giuliani at a Michigan hearing over claims that Dominion Voting Systems' technology was used to perpetrate election fraud.

Now she's the recipient of a cease-and-desist order from the company.

"You gained international infamy earlier this month as Rudy Giuliani's so-called 'star witness' who could supposedly corroborate outlandish accusations that Dominion has somehow rigged or otherwise improperly influenced the outcome of the Nov. 2020 US presidential election," the letter, which was first published by Law and Crime, said.

It continued: "We write to you now because you have positioned yourself as a prominent leader of the ongoing misinformation campaign by pretending to have some sort of 'insider's knowledge' regarding Dominion's business activities, when in reality you were hired through a staffing agency for one day to clean glass on machines and complete other menial tasks."

The letter warned that "litigation regarding these issues is imminent."

Carone did not immediately respond to a request for comment about the cease-and-desist letter.

Carone's testimony included a litany of unfounded claims and accusations that at times bordered on the absurd. She repeatedly told state representatives running the hearing, "I know what I saw."

Carone drew laughter at times during her testimony, especially when she attempted to confront state Rep. Steven Johnson about an alleged discrepancy on the voter rolls.

At one point during the hearing, Giuliani could be heard "shushing" her as she told the oversight panel that she'd seen poll workers run the same ballots through voting machines "thousands of times."

The clip of her testimony went viral online and was viewed nearly 10 million times.

Dominion Voting Systems, which designed voting machines used in at least 24 states during this year's US presidential election, sent out a slew of cease-and-desist letters in recent weeks, threatening legal action against anchors at Fox, OANN, and Newsmax, among others, for making baseless claims about election fraud involving the company. Pro-Trump lawyers, including Sydney Powell and Lin Wood were also sent letters.

Anchors at Fox and Newsmax walked back some of their networks' claims on the air after receiving letters from Dominion.

In the days following her testimony, it was revealed that Carone harassed her fiance's ex-wife by sending her sex tapes. She was charged with misdemeanor disorderly conduct as part of a plea deal. Carone also apparently refused to quarantine after being in close contact with Giuliani directly after he tested positive for the coronavirus.

Dominion is fighting back.

suing alt-media outlets and idiot wingnuts might be more profitable in the long run.

suing alt-media outlets and idiot wingnuts might be more profitable in the long run.

They likely won't get much from this nut job but those Republicans backing Giuliani are going to get their pants sued off, though no doubt nobody wants to see Giuliani with his pants down, again...

Dominion is fighting back.

This was Republicans "star witness". You'd think they would have vetted their "star witness" better instead of embarrassing themselves with what was effectively a single day temp agency employee who is obviously insane.

And probably drunk, and definitely has a criminal background.

Their military intelligence "expert" was a motor pool mechanic too.

Rudy tried to shush this nutcase - when one nut thinks you're a nut - you're batshit crazy,

Too bad for him that he didn't recognize the crazy before bringing her along to "testify".

That didn't matter.  They were so desperate to prove alleged fraud.  They probably paid her to 'testify' in the first place.

Plus it's probably very hard to distinguish nuttiness in others when you're nuttier than a fruitcake yourself.

I saw her testimony.  She sounded like Kate McKinnon from SNL doing a bad drunken imitation of herself. 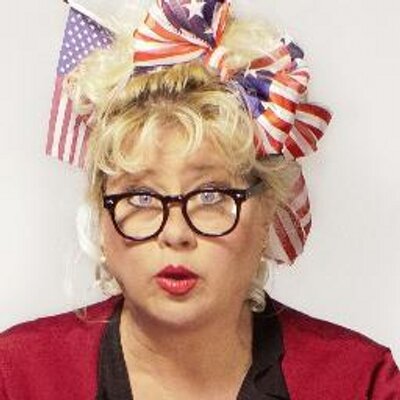 Both look like they did their hair with a weed whacker.

She is full blown nuts. She probably cannot just stop.