Actor Felix Silla, famously known for his role as Cousin Itt on 'The Addams Family,' dies at 84 - CNN

community » Discussions » Category » Other » Discussion » Actor Felix Silla, famously known for his role as Cousin Itt on 'The Addams Family,' dies at 84 - CNN

Actor Felix Silla, who portrayed Cousin Itt on the 1960s TV series "The Addams Family," died on Friday. He was 84.

(CNN)Actor Felix Silla, who portrayed Cousin Itt on the 1960s TV series "The Addams Family," died on Friday. He was 84.

Silla passed away after a battle with pancreatic cancer, his manager Timothy Beal told CNN. "He was a great friend, a great client and he will be missed," Beal said. Fellow actor and Silla's friend of over 40 years Gil Gerard confirmed his passing and tweeted a tribute. Silla and Gerard were castmates in the 1979 action movie "Buck Rogers in the 25th Century" and frequently participated in panel discussions together at conventions like Dragon Con. "Felix died just a few hours ago and the only good I can draw from his passing is that he didn't suffer any longer," Gerard said. "I will miss him terribly, especially the great time we had at our panels." Read More He portrayed the hairy Cousin Itt on the "The Addams Family" during its two-season run starting in 1965. But his career spanned several decades and included roles in 1983's "Star Wars: Episode VI - Return of the Jedi," where he played an Ewok, and a role in the 1987 film "Spaceballs," a spoof of the Star Wars films. The actor did stunt work on "Indiana Jones and the Temple of Doom," "E.T. the Extra-Terrestrial" and "Poltergeist." Silla was expected to go into hospice care on Thursday, according to an earlier tweet from Gerard, who said he had spoken to his friend briefly. Silla is survived by his wife Sue and daughter Bonnie. His son Michael died March 22, 2020, at age 45, according to his publicist Bonnie Vent, who described him as a nice and humble man. Silla was 3 feet, 11 inches tall and his wife is 4 feet, 8 inches tall, Vent said. "Felix used to tell everyone he married a tall blonde," Vent said. "He is beloved by all that knew him."

It honestly never occurred to me that there was an actual person underneath all of that. 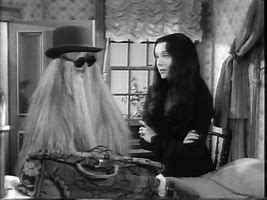 I liked the Adams Family