NASA and SpaceX launched a new team to the International Space Station on Friday, the first crew propelled into orbit by a rocket booster recycled from a previous spaceflight.

It was the first time SpaceX reused a capsule and rocket to launch astronauts for NASA, after years of proving the capability on station supply runs. The rocket was used last November on the company's second astronaut flight.

Embracing the trend, spacecraft commander Shane Kimbrough and his crew weeks ago wrote their initials in the rocket's soot, hoping to start a tradition.

For NASA astronaut Megan McArthur, it was a bit of deja vu. She launched in the same seat in the same capsule as her husband, Bob Behnken, did during SpaceX's first crew flight. This time it was Behnken and their 7-year-old son waving goodbye. McArthur blew kisses and offered virtual hugs.

A masked Musk met briefly with the astronauts at NASA's Kennedy Space Center before they boarded white gull-winged Teslas from his electric car company. The astronauts' spouses and children huddled around the cars for one last "love you" before the caravan pulled away and headed to the pad in the predawn darkness.

Despite the early hour, spectators lined surrounding roads to watch the Falcon take flight an hour before sunrise. Liftoff was delayed a day to take advantage of better weather along the East Coast in case of a launch abort and emergency splashdown.

NASA limited the number of launch guests because of COVID-19, but SpaceX's next private passengers made the cut. Tech billionaire Jared Isaacman, who's bought a three-day flight, watched the Falcon soar with the three people who will accompany him. Their capsule is still at the space station and due back on Earth with four astronauts next Wednesday. It will be refurbished in time for a September liftoff.

For Friday's automated flight, SpaceX replaced some valves and thermal shielding, and installed new parachutes on the capsule, named Endeavour after NASA's retired space shuttle. Otherwise, the spacecraft is the same vehicle that flew before.

"We're thrilled to have a crew on Endeavour once again," SpaceX Launch Control radioed minutes before liftoff.

The first-stage booster aimed for a touchdown on an ocean platform nine minutes after liftoff.

Rapid reusability is critical to Musk's effort to open space to everyone, land NASA's next moonwalkers and, his loftiest goal by far, build a city on Mars.

Musk will go a long way toward achieving that first objective with the private flight in September. It will be followed in October by SpaceX's fourth crew launch for NASA.

SpaceX picked up the station slack for NASA after the space agency's shuttles retired in 2011, starting with supply runs the following year. The big draw was last year's return of astronaut launches to Florida. "It's awesome to have this regular cadence again," said Kennedy's director Robert Cabana, a former shuttle commander.

Boeing, NASA's other contracted crew transporter, isn't expected to start launching NASA astronauts until early next year. First, it needs to repeat a test flight of an empty Starliner capsule, possibly in late summer, to make up for its software-plagued debut in December 2019.

Last week, SpaceX beat out two other companies, including Jeff Bezos' Blue Origin, to land astronauts on the moon for NASA in three or more years. They'll descend to the lunar surface in Starship, the shiny, bullet-shaped rocketship that Musk is testing in the skies over Texas, with fiery, explosive results.

"It's a great time to be here, and we're very excited," the European Space Agency's Frank De Winne, an astronaut turned manager, said shortly before liftoff.

The space station eventually will come to an end, he noted, but the partnership will continue amid hopes of "European astronauts one day walking on the surface of the moon."

I love this stuff!

Supposed to be docking at 5:10 AM Eastern, only a few hours away.

Set your DVRs for NASA TV.

Photo of the SpaceX launch Friday AM. 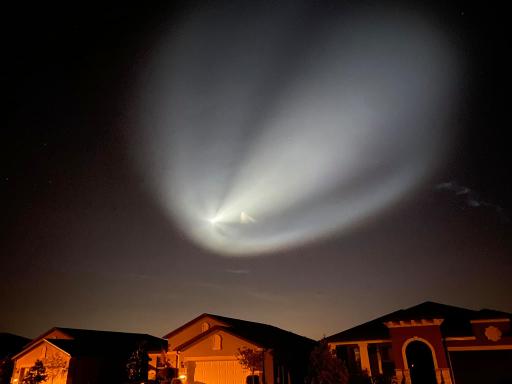 Video of the launch, in flight and docking.

Talk about a huge leap from disposable boosters.

We do miss the heavy lifting and retrieving capacity of the shuttles though.  On hell of an experimental craft!

SpaceX also has the Falcon Heavy, with more than twice the lift capability of the shuttle.

I found an article with lift data - SpaceX Falcon Heavy: How it stacks up with other massive rockets

From the Wright Flyer to this in 118 years, not all that much over the long lifetime for a few hardy and healthy humans. Great time in history to be alive and witness all this

The zero-g indicator this time was a little penguin. 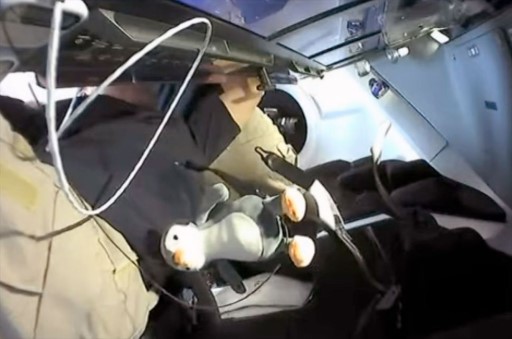