President Joe Biden made history on Saturday, breaking with past U.S. administrations to designate the massacre of Armenians during World War I as genocide.

With one weighty word, President Joe Biden made history on Saturday.

Recognizing the historical massacre of Armenians by the Ottoman Empire during World War One as genocide, Biden went further than any previous occupant of the White House and departed from decades of carefully calibrated language on the subject.

Biden's statement was greeted with praise in the Armenian capital, Yerevan — and among the country's diaspora, whose activists have long campaigned for such recognition — but met with anger in Ankara, where Turkey has denied that the deaths of 1.5 million Armenians between 1915-17 should be considered a genocide.

"The American people honor all those Armenians who perished in the genocide that began 106 years ago today," Biden said in a statement on Saturday, marking the annual Armenian Genocide Remembrance Day.

As a presidential candidate, Biden last year commemorated those killed in the final throes of the Ottoman Empire, modern Turkey's predecessor, and pledged to back efforts to recognize the deaths as genocide if elected.

Earlier this week, Representative Adam Schiff and a group of 100 bipartisan lawmakers sent a letter to Biden urging him to "right decades of wrongs." This follows a 2019 non-binding unanimous resolution passed by the Senate in favor of recognizing the killings as genocide.

The president's decision to fulfil his campaign pledge now in office will prove largely symbolic, according to political experts. But the move does signal a return to the championing of human rights from the White House, they said, although likely to infuriate America's NATO ally.

"This is very important for every Armenian," said Suren Sargsyan, co-founder of the Yerevan-based think tank the Armenian Center for American Studies. He added that almost all Armenian families had ancestors who died in the historic massacres, including his own.

"Unfortunately, this recognition is not a legal recognition; it is not legally binding in order to lead to any compensation," he added. But Sargsyan said he was hopeful the U.S. recognition would pave the way for other nations to follow suit.

So far, about 30 countries have officially recognized the deaths as genocide — among them France, Russia, Canada and Lebanon — according to the Armenian National Institute, a Washington D.C.-based non-profit.

Turkey accepts that many Armenians were killed in clashes with Ottoman forces and in 2014 Turkish President Recep Tayyip Erdogan spoke of a "shared pain" regarding the deaths during World War One. But the country contests the figures and denies the killings were systematically orchestrated or constitute a genocide.

Former President Ronald Reagan made a passing reference to Armenian genocide in a 1981 statement comparing "the genocide of the Armenians" to genocide in Cambodia and the Holocaust.

For decades since then, U.S. presidents have refrained from labelling the killings as genocide, stymied by concerns about geo-political relations with an important strategic ally, mostly in the Middle East.

Recently, however, relations have been strained over a host of issues including Turkey's purchase of Russian weapons systems and policy differences in the Syrian conflict.

Since becoming president more than three months ago Biden had yet to call Erdogan until Friday, a day ahead of the announcement, a delay widely viewed as a cold shoulder towards Erdogan.

Neither the White House statement on the phone call nor a readout from the Turkish presidency made any mention of the Armenian issue. Instead, the leaders spoke of a "constructive bilateral relationship" and agreed to meet on the sidelines of a NATO summit in June, the White House said in a statement.

Kemal Kirici, a Turkish academic and non-resident senior fellow at the Brookings Institution thinktank, said the "hardcore" position taken by Armenia made discussion of the topic in Turkey difficult.

He also said any U.S. criticism could be weaponized by Erdogan.

But in reality, although Erdogan may adopt "very aggressive" language towards the U.S. in response to Biden's speech, he will have few retaliation options, Kirici added, as Turkey battles the coronavirus pandemic and a stalling economy.

Ali Cnar, a U.S.-Turkish foreign policy analyst said the Turkish public would be "very disappointed" at Biden's statement and that the "emotional topic" would provoke a strong reaction.

"It was 100 years ago, why is United States getting involved in this historical debate between Turks and Armenians?" he said.

Armenia, a tiny country nestled between Asia and Europe in the Caucasus region with a population of around 3 million, has a large American diaspora. Among them are high-profile celebrities such as singer Cher, who was born Cherilyn Sarkisian, and the Kardashian dynasty of reality television fame. Although small, the diaspora wields influence far greater than its numbers.

"From an Armenian perspective it's significant in terms of moral clarity," said Richard Giragosian, founding director of the Regional Studies Center, an independent thinktank in Yerevan. Adding that Biden's statement was more than a gesture and signaled a "return by the U.S. to the moral high ground."

Biden's words also ended the "disingenuous" performances of previous U.S. administrations, he said, and came at a time of "grief and mourning" for many in Armenia, fresh from a defeat by neighbor and Turkish ally, Azerbaijan.

Last September saw weeks of fighting over 1,700 square miles of the disputed border territory Nagorno-Karabakh, with Armenians setting fire to their homes as they ceded land to Azerbaijan under a fragile armistice. The disputed region has a majority ethnic Armenian population but is internationally recognized as part of Azerbaijan.

Armenia's military defeat sparked demands for the downfall of the government and has been an open wound and source of humiliation for the country. Biden's words will provide a boost to national pride, said Giragosian.

"Such a move by Washington is especially welcome and especially emotional," he added.

For Aram Hamparian, executive director of the Armenian National Committee of America, a U.S.-based political organization, Biden's "recognition is profoundly meaningful for our families," he said. Adding that all four of his grandparents were genocide survivors and credited America with saving many lives.

But he urged Biden to translate the "symbolism" of Saturday's statement into hard policy, including supporting Armenia's security, suspending aid programs to Azerbaijan and stopping arms deals with Turkey, despite any "temper tantrum" the country may throw as a result.

Biden's statement meant a lot to the Armenian-American community, he added, as it showed "that our government is no longer lying about our history." Making it clear that "America is a country that will do the right thing."

My decision to attack Poland was arrived at last spring. Originally, I feared that the political constellation would compel me to strike simultaneously at England, Russia, France, and Poland. Even this risk would have had to be taken........

Our strength consists in our speed and in our brutality. Genghis Khan led millions of women and children to slaughter -- with premeditation and a happy heart. History sees in him solely the founder of a state. It's a matter of indifference to me what a weak western European civilization will say about me.

I have issued the command -- and I'll have anybody who utters but one word of criticism executed by a firing squad -- that our war aim does not consist in reaching certain lines, but in the physical destruction of the enemy. Accordingly, I have placed my death-head formations in readiness -- for the present only in the East -- with orders to them to send to death mercilessly and without compassion, men, women, and children of Polish derivation and language. Only thus shall we gain the living space   (Lebensraum)   which we need. Who, after all, speaks today of the annihilation of the Armenians?

Kevork B. Bardakjian,   Hitler and the Armenian Genocide   (Cambridge, Massachusetts: The Zoryan Institute, 1985).

I was 20 when I first learned about the Armenian Genocide from an Armenian friend. He told me about the first modern genocide of 1.5 million people, everything from forced marches to packing trainloads of Armenians to death camps. Recognizing this is a long time coming and I for one am thrilled that Biden did this today because it is the right thing to do.

An Armenian client who became a good friend who bought a home around the corner from ours in order to be close, told me stories his grandfather, who had survived the genocide, had told him.  I had never known about it previously. 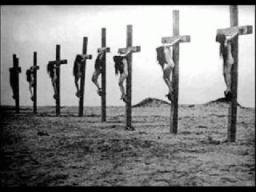 There is no way I can thumb-up that picture.

It's ugly, but that is what they have been denying for over a century.

The Armenian genocide happened and Turkey was responsible. It is a historic fact which has been well proven by the evidence. Denial of these facts is futile one hundred years later. Like the genocide of Native Americans all of those responsible are dead now but that does not erase the facts of the matter.

I totally agree. If we don't remember, we are also doomed to repeat. I know the stories from both of my backgrounds and it pains me to think that my people were killed just because of who they were.

There was never a century like the 20th. So many genocides and this was the mother of them.

You left out the greatest of them all:

According to the authoritative “Black Book of Communism,” an estimated 65 million Chinese died as a result of Mao’s repeated, merciless attempts to create a new “socialist” China. Anyone who got in his way was done away with -- by execution, imprisonment or forced famine.

And that horror of horrors was committed over an ideology!

Maybe Perrie didn't want to smack me in the face with it but obviously you have no such reluctance.  I agree that what Mao caused was horrific, but most died from the famine, and the famine was not intentional, it was mismanagement.  You know what mismanagement and denial cause, don't you - 570,000 deaths and counting.

Kemal Kirici, a Turkish academic and non-resident senior fellow at the Brookings Institution thinktank, said the "hardcore" position taken by Armenia made discussion of the topic in Turkey difficult.

He also said any U.S. criticism could be weaponized by Erdogan.

But in reality, although Erdogan may adopt "very aggressive" language towards the U.S. in response to Biden's speech, he will have few retaliation options, Kirici added, as Turkey battles the coronavirus pandemic and a stalling economy.

So this guy pretty much admits he and Erdogan are engaging in meaningless posturing over having the truth told regarding Turkey's past actions.

Yeah, I think we all knew that already.

Tough shit. Turkey can get upset, they will get over it.

And I thought it was considered a really big deal when a former President pissed off our allies.

Could you be more specific? It really does depend on for what and to who.

And for the record, what are your feelings about recognizing the Armenian genocide, which is the actual topic.

The vast majority, over 95%, of Armenians are Armenian Orthodox Christians. Not sure if there was/is a Jewish population in Armenia.

There is a very small group (about 750) still in Armenia