EXCLUSIVE: Andrew Giuliani said the FBI's raid of his father's New York City apartment Wednesday only gave him "more confidence" that running for governor of New York is "the right path" for him, saying his "resolve" is "as strong as ever."

EXCLUSIVE: Andrew Giuliani said the FBI's raid of his father's New York City apartment Wednesday only gave him "more confidence" that running for governor of New York is "the right path" for him, saying his "resolve" is "as strong as ever."

Federal investigators executed a search warrant on former New York City Mayor Rudy Giuliani's home Wednesday, seizing electronic devices, including laptops and cell phones, as they investigate whether he violated the law by lobbying the Trump administration on behalf of Ukrainian officials in 2019.

During an interview with Fox News, Giuliani was asked if the raid on his father's apartment gave him pause as to whether to enter into the gubernatorial race.

"Yesterday actually only gave me more confidence that running is the right path, to be perfectly honest," he told Fox News. "I think they are threatened by a Gov. Giuliani, if I were to run. My resolve is as strong as ever."

Giuliani said he doesn't have an "official announcement" just yet, but said one could be coming soon.

"I can tell you we are leaning in on this," he said. "And we are closer to yes than ever."

Giuliani, who is the son of Trump's longtime personal attorney, and served as associate director in the White House Office of Public Liaison during the Trump administration, was asked how he would handle being tied to Trump through the gubernatorial race.

"I would be running as Andrew Giuliani, that would be on the yard signs, but I am not running away from my association with President Trump at all," Giuliani told Fox News. "I think the one thing New Yorkers will find out about me, if I do get in this race, more than anything, is I try to be a genuine person.

"And I am proud of the four years I spent working for President Trump— I'm proud of our 25-year friendship. I'm certainly proud of all of the accomplishments we were able to accomplish together in the Trump White House," he said. "So I will never run away from that."

Giuliani told Fox News that he served in the White House while his father served as the president's personal attorney.

"We had different duties with how we were serving the country," he said of himself and his father, noting that he was working with "the business community, on the Paycheck Protection Program, the CARES Act, a bunch of different things.

"He honored my role in the White House and I honored his role," he said.

He added: "So I think that's for New Yorkers to determine. But what I can tell you, more than anything, is I am focused on turning this great state around."

Giuliani's potential campaign comes as some Trump allies have rallied their support behind New York Congressman Lee Zeldin, who announced his gubernatorial bid earlier this month.

While New York is a reliably blue state where Cuomo won reelection to a third term in 2018 by a massive 23-point margin, the governor has fallen under intense scrutiny, as 10 women have lodged allegations of sexual harassment against him, leading to an independent investigation by the state attorney general into the claims and an impeachment investigation in the State Assembly.

Cuomo has vehemently denied the allegations against him and has offered public support for the investigations into them.

Cuomo has also been politically wounded by the nursing home crisis, facing criticism after revelations that his administration concealed the full extent of nursing home-related deaths during the COVID-19 pandemic.

The chances this nobody would be running for office if he didnt have a famous name. 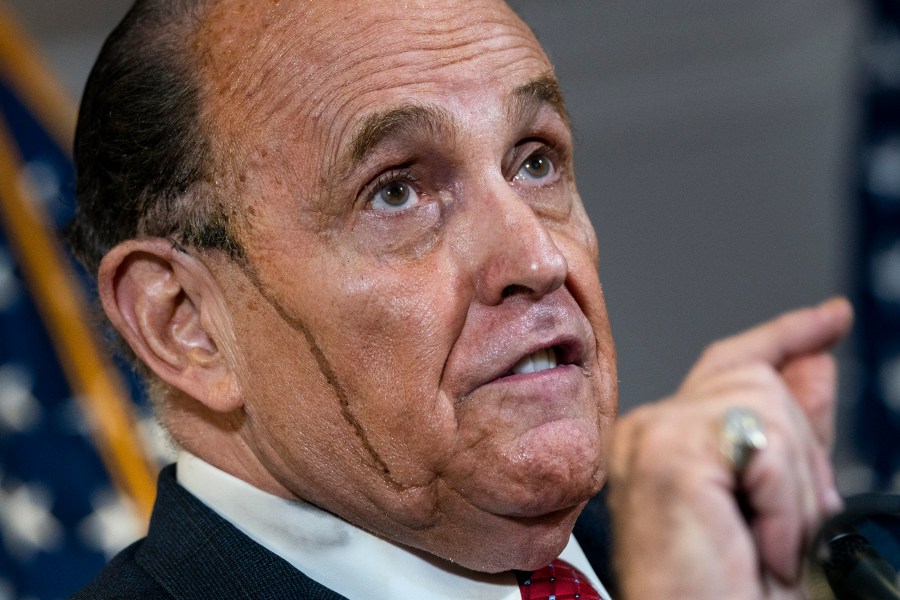 He may not have, they sure don't look alike, lol.

And Andy G. has also recently returned from Mar-a-Lago where-upon and with bended knee he received the 'permission' and accolade for his endeavor to foster, seed and spread corruption to thusly give cover, support and excuse for The Putin Oligarchy.

This is almost as absurd as Don Jr. thinking he has a chance at a successful presidential run.