Israelis rule out an immediate end to hostilities, saying they seek to destroy Hamas's military infrastructure and tunnel network.

TEL AVIV—President Biden voiced support for a cease-fire in a call with Israeli Prime Minister Benjamin Netanyahu as Israel said airstrikes in the Gaza strip targeted a tunnel network used by Hamas amid rising civilian casualties in the conflict.

Mr. Biden's support for a cessation in hostilities, amid pressure from progressives in his party, came as the two sides continued to trade fire and after 42 Palestinians died on Sunday, the deadliest day of the current escalation.

Mr. Biden "expressed his support for a cease-fire and discussed U.S. engagement with Egypt and other partners toward that end," according to a White House statement, which fell short of an explicit demand to end the fighting.

Mr. Biden "reiterated his firm support for Israel's right to defend itself against indiscriminate rocket attacks," the statement said. The president also "encouraged Israel to make every effort to ensure the protection of innocent civilians."

The Israeli military said assaults with warplanes hit roughly 60 miles of underground passageways that it says are used to ferry weapons and fighters across Gaza, a subterranean network Israel has dubbed Hamas's metro.

The military also said it thwarted a potential Hamas underwater attack into Israeli territory with a submerged vessel and killed a senior commander with the Gaza militant group Palestinian Islamic Jihad, which confirmed the killing. Israeli forces later destroyed a large building in the Rimal neighborhood it said was the main operations center for Hamas’s internal security services.

Mr. Netanyahu said  Israel would continue to strike positions in Gaza  until it has degraded Hamas’s military capabilities and hurt its capacity to wage attacks against Israelis, adding that the military campaign will take time. Mr. Netanyahu has described Hamas’s decision to launch rockets toward Jerusalem a week ago as a red line.

“We are going to continue hitting targets in Gaza,” Mr. Netanyahu said late Monday. “We will continue to act as much as needed to restore calm.”

Yahya al-Sarraj, the mayor of Gaza City, the strip’s biggest population center, said the strikes hadn’t targeted military positions and instead hit roads and civil infrastructure, setting the economy back years. He called the strikes collective punishment and asked the international community to stop assaults on vital infrastructure in Gaza.

Inside Israel,  violence between Israeli Jews and Arabs  that racked the country in recent days appeared to be dissipating Monday, Israeli officials said. The Israeli police said they had responded to more than 40,000 incidents and carried out more than 900 arrests in the past week.

So far, diplomatic efforts to end the fighting have made little visible headway. In recent days, U.S. Deputy Assistant Secretary of State Hady Amr has held meetings in Israel, while Secretary of State Antony Blinken has phoned counterparts in Egypt, Pakistan, Saudi Arabia and Qatar, calling for a cease-fire.

In a press briefing from Copenhagen on Monday, Mr. Blinken said the issue of a cease-fire was between Israel and Hamas, but that  the U.S. was working around the clock  through diplomatic channels to end the conflict between the two warring parties. Hamas is designated a terrorist organization by the U.S. and Israel. Mr. Blinken reiterated Washington’s stance that Israel has a right to defend itself but added that it also has an obligation to prevent civilian casualties.

The Biden administration’s diplomatic efforts  have drawn criticism from several Democrats who want the administration to leverage U.S. military aid  to Israel to push for an end to the fighting.

Rep. Gregory Meeks (D., N.Y.), the chairman of the House Foreign Affairs Committee, told committee Democrats Monday evening that he would consider sending a letter to the administration this week urging a delay on the sale of $735 million in weapons to Israel until lawmakers can review the sale, according to two people familiar with the matter.

Republicans have pressed Mr. Biden to take a more firm stance in defense of Israel.

Hamas’s political leader, Ismail Haniyeh, said in an interview published Monday in the Lebanese newspaper Al Akhbar that Egypt, Qatar, Russia and the United Nations have contacted Hamas as part of efforts to reach a cease-fire. Mr. Haniyeh said his group would only accept a solution that “rises to the sacrifices put forward by the Palestinian people.”

Israel has launched scores of attacks it says are targeting Hamas, but it has provided little evidence to back those claims. Many of those strikes have caused civilian casualties. Israel says it has aborted hundreds of airstrikes to avoid harming civilians and that Hamas leans on the Gaza health ministry to inflate deaths of women and children and put diplomatic pressure on Israel.

United Nations officials said Monday that 116 civilians, including 61 children and three pregnant women, had been killed in Gaza since Israel launched its military operation last week.

A spokesman for the Gaza health ministry denied manipulating figures, saying it has the names of everyone killed in Gaza and could verify those with international organizations.

“Israeli forces have displayed a shocking disregard for the lives of Palestinian civilians by carrying out a number of airstrikes targeting residential buildings, in some cases killing entire families,” human-rights group Amnesty International said Monday.

The international healthcare nonprofit Doctors Without Borders said Monday that one of its clinics was severely damaged and had to be closed following Israeli airstrikes on Sunday that led to the deaths of 42 Palestinians.

“The horrendous attacks on civilians and civilian infrastructure that we are witnessing in Gaza are inexcusable and intolerable,” said Ely Sok, the group’s head of mission in the occupied Palestinian territories.

Israel’s military said those airstrikes targeted underground tunnels used by militants in Gaza, and that when the tunnels collapsed, so did the infrastructure holding up the civilian buildings in the area, “leading to unintended casualties.”

As part of its campaign, the Israeli military said early Monday it blew up the homes of nine Hamas commanders in a strategy to kill the militant group’s operatives and demoralize the senior leadership. Israel has said that it has killed at least 130 Hamas militants.

Gaza’s government ministries said the blasts leveled roughly 1,000 homes, damaging 6,000 more and about 35 schools. Authorities said destruction of roads, agriculture and energy facilities amounted to tens of millions of dollars, including the wrecking of an ice-cream plant and plastics factory. The General Directorate of Civil Defense, the body responsible for emergency services in Gaza, said bombings hit a sponge factory in the northern Gaza Strip, causing fires that risked spreading to houses and dragged resources away from other more-needed areas.

Israel identified  Hamas’s underground tunnel network  as a threat during the last significant round of fighting in 2014, prompting the Israeli military to launch a ground invasion of Gaza to find and destroy passageways leading into Israeli territory.

On Monday, an Israeli air force official said the destruction of the tunnels was meant to force Hamas militants above ground, making it easier for the Israeli military to prevent their attacks against Israeli civilians.

“It’s an important part of how you fight Hamas, which has dug hundreds of kilometers of tunnels underground,” the official said, adding that the Israeli air force was hitting choke points rather than the entire tunnel system.

The targeting of the tunnels only came after Israel first struck at Hamas’s rocket manufacturing and launching capabilities, the Israeli official said.

The air force official said Hamas still had enough missiles and the ability to continue attacking Israel for a long time. Militants have fired more than 3,200 rockets at Israel since the conflict began last Monday.

Israeli officials have said their campaign had made significant gains, including destroying all of Hamas and Palestinian Islamic Jihad’s rocket manufacturing sites. There were 31 such sites and Israel believes the groups won’t be able to produce more rockets in the short term.

Mr. Blinken reiterated Washington’s stance that Israel has a right to defend itself but added that it also has an obligation to prevent civilian casualties.

The crisis in the Middle East is another unwelcome intrusion of reality into the fantasy world of Joe Biden & Democratic progressivism.

Leftist Democrats, whose demands the president has so dutifully followed so far, don’t like Israel. They see the Palestinian cause as another case of the equity and racial-justice objectives they’re busy pursuing here in the US.

I guess Joe is going to keep on appeasing the radical left. 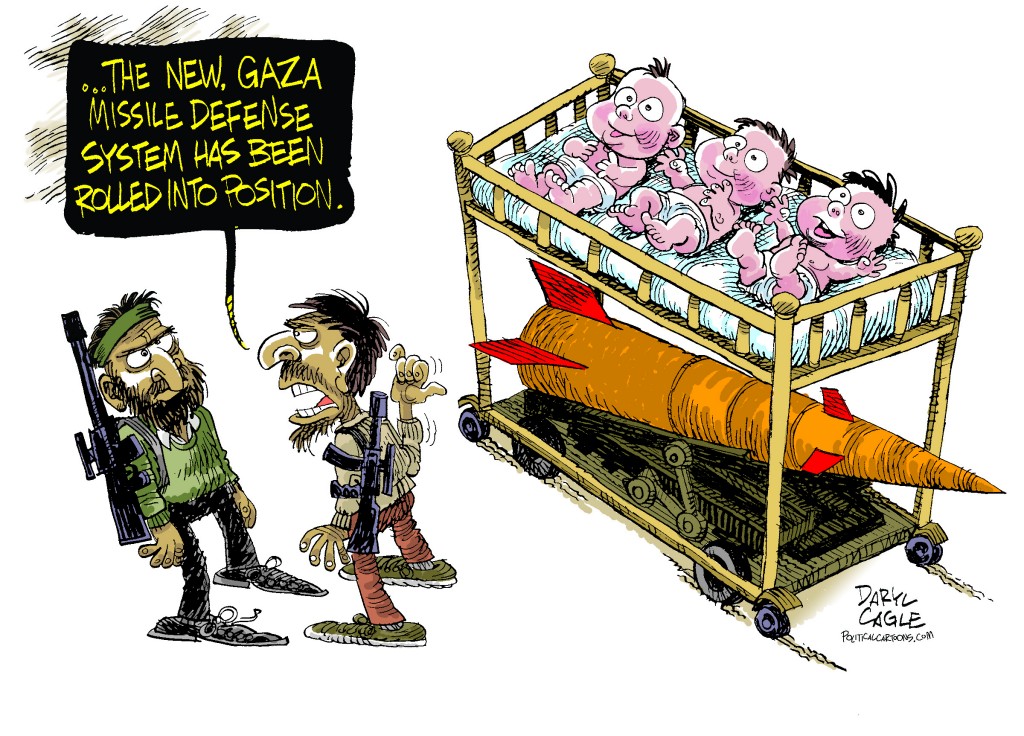 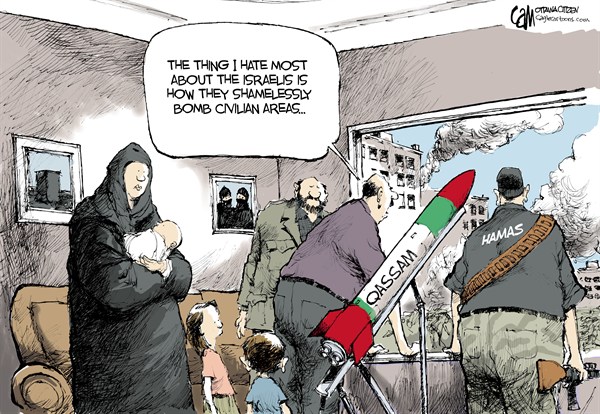 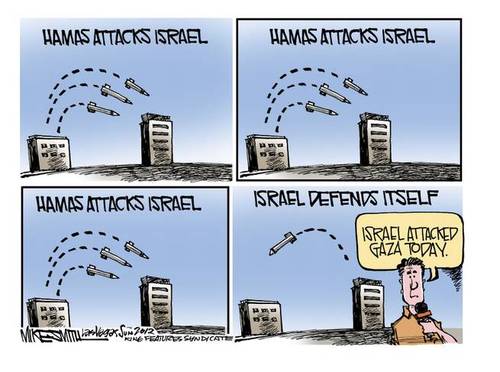 Professor Principal
2.1  seeder  Vic Eldred  replied to  Buzz of the Orient @2    one month ago

It's both funny, yet poignant and sooooo true. They have made hiding behind civilians their main tactic. Then they claim Israel killed civilians.

I think you understood.

Masters Quiet
4  Ronin2    one month ago

while Secretary of State Antony Blinken has phoned counterparts in Egypt, Pakistan, Saudi Arabia and Qatar, calling for a cease-fire.

Is the Biden administration really that damn clueless? Hamas isn't going to listen to any of those countries. Money talks; and Hamas gets their money from Iran. Shut down the flow of money and Hamas will crumble.

Maybe he thinks those countries will put pressure on Israel? Which means he doesn't follow history either; because Israel doesn't listen to any outside influences- unless they are saying something Israel wants to hear.

Hamas started it again, this time Israel should finish it and Joe Biden should shut up

It will never be finished.

Israel will need to raze Gaza to the ground to remove Hamas. Anyone left alive will instantly become the next terrorist hitting Israel where ever and whenever they can. It will also create massive problems for any country that has a large Palestinian population in the area. Egypt, Jordan, Lebanon, and Syria will all become staging grounds as people flock to the Hamas banner to fight Israel. Israel will hold those countries responsible for not being able to quell the violence. Egypt is the only one that will stand a chance- the rest are too weak; and in Syria's case in the middle of a proxy civil war.

This needs to be handled by people with brains, tact, and understanding of the situation not just in Israel and Gaza; but throughout the Middle East. Which instantly removes both Israel and Hamas; and unfortunately the US with Biden in charge.

Israel will need to raze Gaza to the ground to remove Hamas. Anyone left alive will instantly become the next terrorist hitting Israel where ever and whenever they can

Israel's position reminds me of a well known quote from a Holocaust survivor:

When someone says they want to kill you...believe them!

Israel should finish it and Joe Biden should shut up

Ironically, Biden is being criticized from both the Right and the left!

(Of course most of this is just the usual arguments of "politics as usual". Don't people realize that what Biden-- or for that matter any politician-- says is irrelevant. Israel's very existence is threatened by a terrorist group who has clearly stated  said that want to exterminate them...so Israel actually doesn't have much choice....

Professor Principal
6  Buzz of the Orient    4 weeks ago 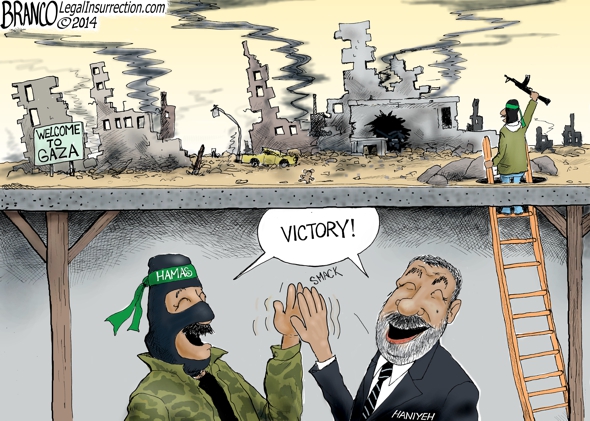 Actually, Israel probably demolished those underground tunnels the Hamas terrorists were hiding themselves and their weapons in.

Why stop when you are winning?