Netanyahu: We'll defend against Iranian threat even at cost of friction with US

community » Discussions » Category » News & Politics » Discussion » Netanyahu: We'll defend against Iranian threat even at cost of friction with US

PM says Israel will 'do everything, but everything' to prevent Tehran from getting nuclear weapons; Gantz: Differences should be solved discreetly, not with 'defiant rhetoric'

Prime Minister Benjamin Netanyahu said Tuesday that if pushed to choose between a lack of friction with the US or defending the country against the nuclear threat from Iran, Israel will choose to confront the Islamic Republic.

Speaking at a ceremony at which control of the Mossad intelligence agency was handed over from outgoing director Yossi Cohen to his replacement David Barnea, Netanyahu said Israel must "do everything, but everything, in order to ensure that under no circumstance Iran arms itself with nuclear weapons."

"The greatest threat against us is the existential threat which is presented by Iran's attempt to arm itself with nuclear weapons," Netanyahu said.

Faced with a choice between relations with the US or neutralizing Iran, "the elimination of the existential threat prevails," he said.

Netanyahu said that whether Iran menaces Israel directly with the threat of destruction in a nuclear strike, or with tens of thousands of conventional rockets that are backed up by a nuclear threat, "it is a threat that threatens the continuation of the Zionist enterprise, and we must fight this threat endlessly."

The prime minister noted that in his recent conversations with US President Joe Biden he had stressed that whether or not world powers manage to revive the 2015 deal that aimed to prevent Iran from obtaining nuclear weapons, "we will continue to do everything we have at our disposal to thwart Iran's armament with nuclear weapons." In 2015, the US negotiation of the accord resulted in tensions between Netanyahu and then-president Barack Obama.

Following the comments, Defense Minister Benny Gantz released a statement touting Israel's ties with the US and saying that differences should be solved discreetly and not with "defiant rhetoric."

"The United States was and will continue to be Israel's most important ally in maintaining its security and security superiority in the region. Israel has and will have no better partner than the US," Gantz said. "Even if there are disagreements, they will be solved behind closed doors and not with defiant rhetoric that could harm Israel's security."

Following the speech, Gantz announced that he would be traveling to Washington Tuesday night to meet with US Defense Secretary Lloyd Austin and National Security Advisor Jake Sullivan. He will discuss the Iranian issue as well as the recent fighting between Israel and Hamas and arms assistance to the IDF, a statement from his office said.

Netanyahu's remarks came the day after the UN nuclear watchdog voiced concern that Iran had not clarified queries over possible undeclared nuclear activity, adding that its enriched uranium stockpile was 16 times the limit set out in the 2015 accord.

The two reports issued by the International Atomic Energy Agency (IAEA) on Monday are the first substantive reports since Iran suspended some inspections in February.

One of the reports said IAEA director general Rafael Grossi was "concerned that the technical discussions between the agency and Iran have not yielded the expected results," referring to exchanges on the sites where undeclared nuclear activity may have occurred.

The conclusion comes despite a "proactive and focused effort" launched by the IAEA in April "to break the impasse" over the sites.

The IAEA says that the results of its inspection work have established "a clear indication that nuclear material and/or equipment contaminated by nuclear material has been present" at three undeclared locations, with most of the activity in question dating back to the early 2000s.

The agency also said Iran has failed to answer questions regarding a fourth site where natural uranium may have been present between 2002 and 2003 in the form of a metal disc.

Iran and world powers are engaged in talks in Vienna to rescue the 2015 nuclear deal after former US President Donald Trump walked away from it in 2018 and reimposed crippling sanctions on Tehran.

Trump's successor Joe Biden has signaled his willingness to revive the agreement.

For this to happen, the US would need to return to the accord and lift the sanctions reinstated by Trump while Tehran would have to re-commit to full compliance with nuclear obligations it progressively withdrew from since 2019.

In a separate report, the IAEA said Iran's stockpile of enriched uranium is around 16 times the limit laid down in the 2015 deal with world powers. It gave an estimate of a stockpile of 3,241 kilograms (7,145 pounds) but said that it was not able to verify the total.

A senior diplomat with knowledge of the issue said that while the suspension of some inspections meant that the IAEA could not give precise figures for the stockpile, its level of access to declared sites has not been greatly reduced and its stockpile estimate would still be accurate to within a few percentage points.

The rate of production of enriched uranium has slowed since the last quarterly report from the IAEA in February.

In Monday's report, the IAEA estimated 62.8 kilograms of the uranium stockpile had been enriched up to 20 percent and 2.4 kilograms up to 60%. Earlier this month Grossi said Iran was enriching uranium at levels only seen in countries seeking nuclear weapons.

Iran stepped up enrichment to the unprecedented 60 percent after a blast hit its Natanz nuclear site, an act that Tehran branded "sabotage" by Israel.

Under the 2015 deal, the enrichment level was meant to be capped at 3.67%, well below the 90% purity needed for a nuclear weapon.

The latest report will be presented to the IAEA's board of governors next week.

Talks to restore the 2015 deal are taking place in Vienna as Iran prepares for presidential elections on June 18.

A stark warning for Biden and his handlers.

Who are President Biden's 'handlers'?

How did AOC say it?  He went beyond our expectations....the dumb ass!

So the IAEA is not permitted to inspect all the sites in Iran where nuclear activities are taking place, and they have announced that Iran has already refined almost 20 times the amount limited by the nuclear deal.  Makes Alfred E Newman come to life... 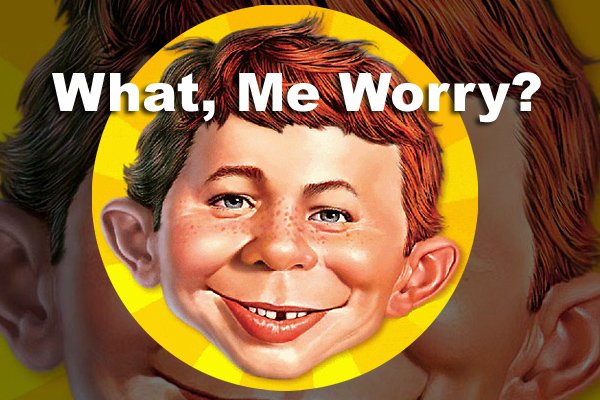 And Israel has said that it is more concerned about preventing itself from being turned into a glass parking lot and all its citizens being fried alive by Iran than maintaining a friendly relationship with the USA - of all the fucking nerve eh?

Biden continues to kiss the asses of the mullahs,

and to curry favor with Hamas and other terrorist organizations.