The comments – in a country where public discussion of the leader’s health and personal life is nearly always off-limits – are being seen as an effort to boost domestic support for Kim as he grapples with deepening economic hardships caused by the COVID-19 pandemic, sanctions imposed as a result of its nuclear programme, and natural disasters, some experts said.

“Our people’s hearts ached most when we saw [Kim’s] emaciated looks,” North Korean state TV cited the unidentified man as saying on Friday. “Everyone says their tears are welling up in their eyes naturally.”

Judging from photos published recently, Kim, who is about 1.70 metres (5 feet, 8 inches) tall, appears to have lost some weight. Previously tipping the scales at about 140 kilograms (309 pounds), which would make him “very severely obese”, North Korea watchers say he may have lost between 10 and 20 kilograms (22 – 44 pounds) in recent times.

Analysts said the remarks showed authorities were seeking to use the change in Kim’s weight to reinforce loyalty to the regime in desperate times, portraying him as a “devoted, hardworking” leader as the country struggles to tackle a food crisis and other challenges.

The country shut its borders in January last year to protect itself against the pandemic and, as a result, trade with Beijing – its economic lifeline – has slowed to a trickle.

“The message Pyongyang is sending is that Kim is a leader who works very hard for his people even to a degree he skips meals and loses weight,” defector-turned-researcher Ahn Chan-il told the AFP news agency.

The North is more isolated than ever behind its self-imposed coronavirus barricade, and this month Kim admitted the food situation was “tense” in a country that has long struggled to feed itself.

It is unclear whether Kim’s weight loss is due to illness, or whether he decided that it was time to get fit, and the intention behind the state media coverage is unknown, said Jenny Town, director of the US-based 38 North project, which monitors North Korea.

“It is a little strange that they would show him in such ill-fitting clothes, as the optics do seem to emphasise his weight loss,” she said.

“It is a major weight loss, and his health is important to the functioning and fate of the state, which is why people are watching this closely.”


Kim’s personal life is normally taboo for North Korea’s state media – Pyongyang has never even confirmed how many children the 37-year-old has – but he is a heavy smoker and has put on weight since he became leader nearly 10 years ago.

Yang Moo-jin, a professor at the University of North Korean Studies, said it was unlikely Kim’s recent weight loss was a symptom of acute ill health, as he had attended several public events this month.

“No one can really know why he lost weight,” he said. “What’s clear – from the KCTV footage – is the regime wants the world to think that its people love and care for their leader, to a point where they’d cry over his thinner appearance.”

If he weighed over 300 pounds an only lost 40 some...he's still obese for his height.

This is an opportunity for Trump to stay relevant. He can undertake a mission of mercy and personally deliver some nutritious cheeseburgers to Kim Jong Un to fatten him back up.

Fat or thin, he is still a disgusting little puke of a man. 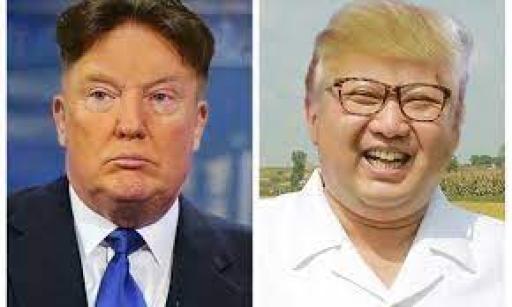 Professor Participates
6  evilgenius    one month ago

I think a Biden Admin Intern sent a fruit basket.