'It's quite magical': The revival of drive-in movies amid the COVID-19 pandemic

community » Discussions » Category » Entertainment » Discussion » 'It's quite magical': The revival of drive-in movies amid the COVID-19 pandemic

'It's quite magical': The revival of drive-in movies amid the COVID-19 pandemic 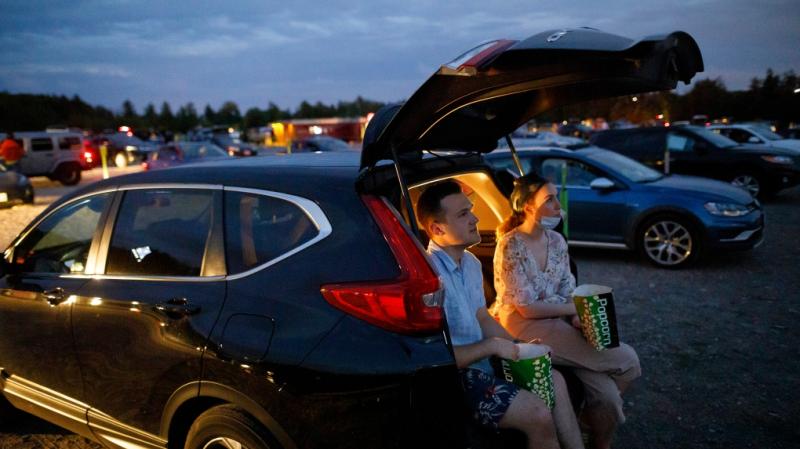 Moviegoers sit in the trunk of a car at the 5 Drive-In Theatre in Oakville, Ont., during the premier of Jay Baruchel's movie Random Acts of Violence, Wednesday, July 29, 2020. THE CANADIAN PRESS/Cole Burston

TORONTO -- Brian Allen loves sitting in his car, windows rolled down, listening to the murmur of excited chatter, as the warm glow of the sun fades and the cinema screen brightens. The flashing neon signs all around, the smell of popcorn wafting through the windows, tires crunching on the gravel as cars park– it all reminds him of his childhood.

The president of Premier Drive-In Theatres says nostalgia, as well as his firm belief that nothing could compare to an authentic drive-in movie experience, are what have kept him in the family businesses, which started in the 1950s and now operates five massive outdoor theatres in rural parts of Ontario.

The entire industry is picking up speed amid the COVID-19 pandemic as indoor movie theatres temporarily close, and Allen says that nothing is giving him more joy than witnessing people watch a movie under the stars for the first time.

“I can’t do it justice. It’s quite magical. In the middle of nowhere, you see everything light up at nighttime. It makes my heart flutter,” Allen told CTV News Toronto.

“I always believed in drive-ins. When I drive down the aisles and I hear the families giggling at a comedy … they seem to be happy, I know it makes people happy.”

While his theatres in Oakville, London, Barrie, Hamilton and Newmarket were always popular with people who loved outdoor cinema, Allen said the pandemic is bringing in a new crowd who are experiencing it all for the first time.

“A lot of people are discovering them again. They have always been popular, but right now, we have seen a huge surge with the pandemic just in terms of interest and the type of people coming. More people from the city,” he said. “There is a huge resurgence in understanding what a drive-in is.”

The Premier Drive-In Theatres operate at 50 per cent capacity right now. Allen said the cars are all social distancing, and the company is following all other COVID-19 protocols.

“It feels like a safe place for people both emotionally and physically,” he said. 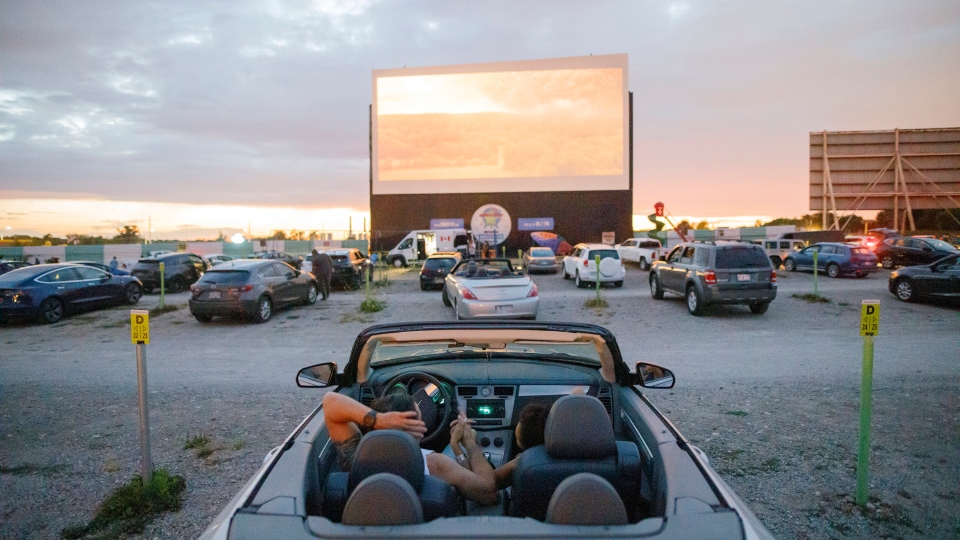 Allen’s theatres are not the only drive-ins available right now amid the pandemic. Several companies and organizations that never dabbled in outdoor cinema have launched their own pop-up drive-ins.

Ontario Place, which boasts the largest indoor IMAX theatre in the province, launched an outdoor pop-up drive-in theatre last year, and hosts a number of film festivals, as well as the Drive-InTO program.

“This was absolutely pandemic driven because people could stay in their cars and stay safe,” Glenn Shaver, a senior manager at Ontario Place, told CTV News Toronto. “The interesting thing we found last year, and going into this year, is that people have discovered drive-ins that have never been to one.”

“We’ve had a great response and we’ve had great feedback because it is a different theatrical experience.” 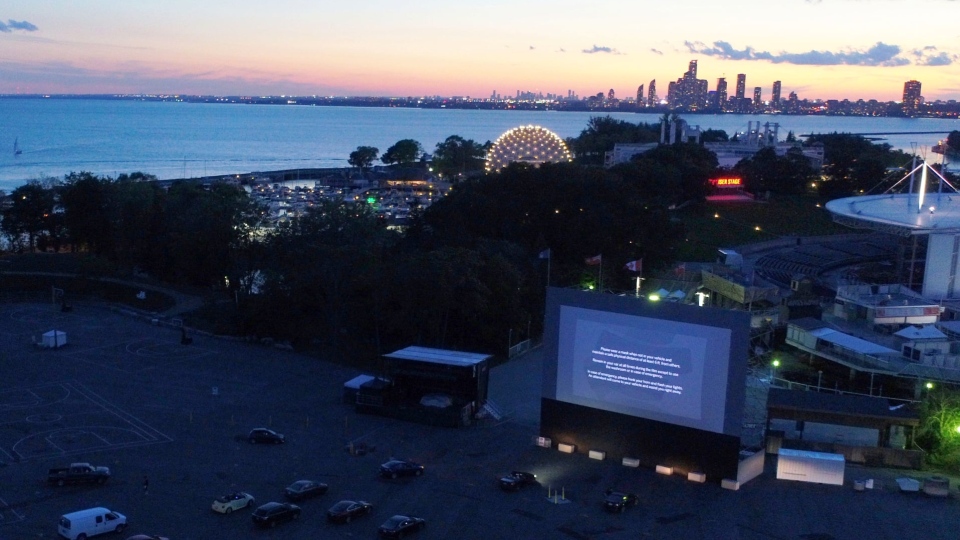 Shaver said Ontario Place won’t likely continue with their drive-in once the pandemic ends, and will instead focus on its indoor theatre.

Allen said his outdoor theatres will stick around as long as they can, and he expects the momentum to continue even after the pandemic because people are rediscovering the joys of outdoor cinema.

He said the decline in drive-ins was never due to a demand issue or a lack of popularity, but rather due to a supply issue as land became too costly. There are currently 16 drive-in theatres in Ontario, not including pop-ups.

“Nobody lost their interest in drive-ins,” he said. “The problem was that real estate became worth far too much money.” 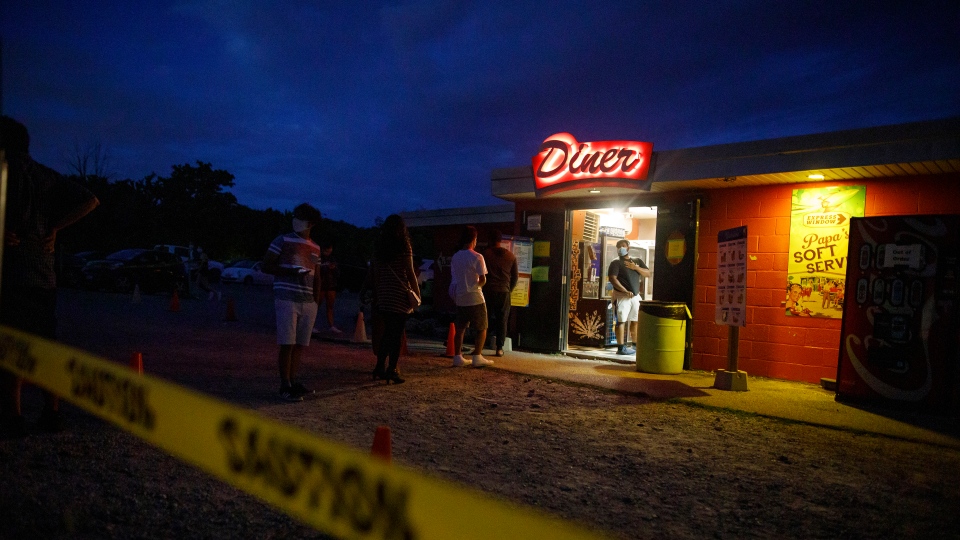 Allen said most of his theatres were built in the 1950s. He said they were built specifically as drive-ins unlike many of the pop-ups nowadays.

“They reflect the art of that period and the history is there,” he said. “We use the original neon signs and it’s not memorabilia that’s been redone, it’s all original.”

He said all his theatres are sold out almost on a nightly bases. 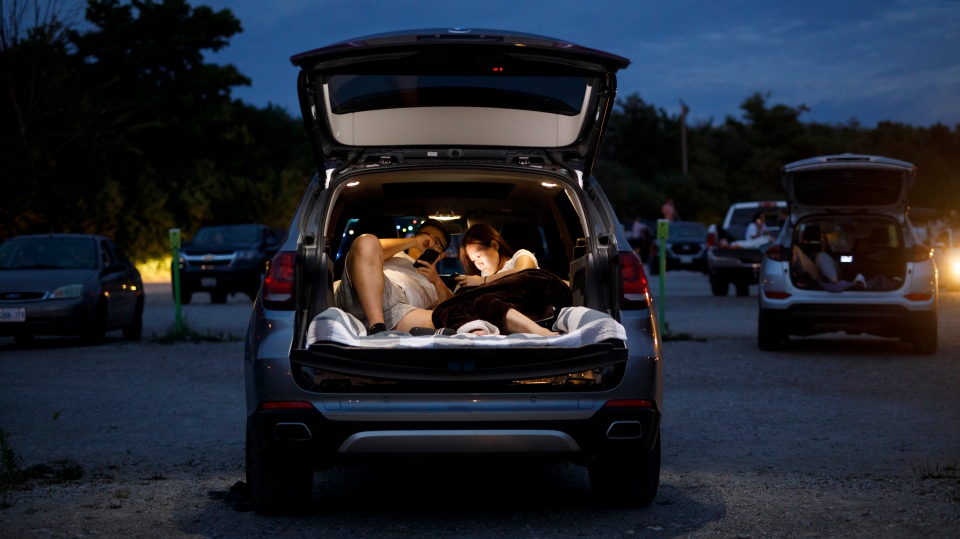 “We're not going anywhere and the drive-ins will go on forever, as long as I can. It just so special,” he said. “I can't do it justice. Until the sun starts to drop, and the tires start crunching on the gravel, and the kids are on the swings, then you will understand what we do.”

When he was a young boy, Allen said his father would bring him and his siblings along when checking on the drive-ins at night. He said he remembers trying to catch the last glimpses of a movie as they would drive away – the screen getting smaller and smaller the further they got.

“I just thought it was magical,” he said. “People are very emotionally connected to drive-ins, to the locations.” 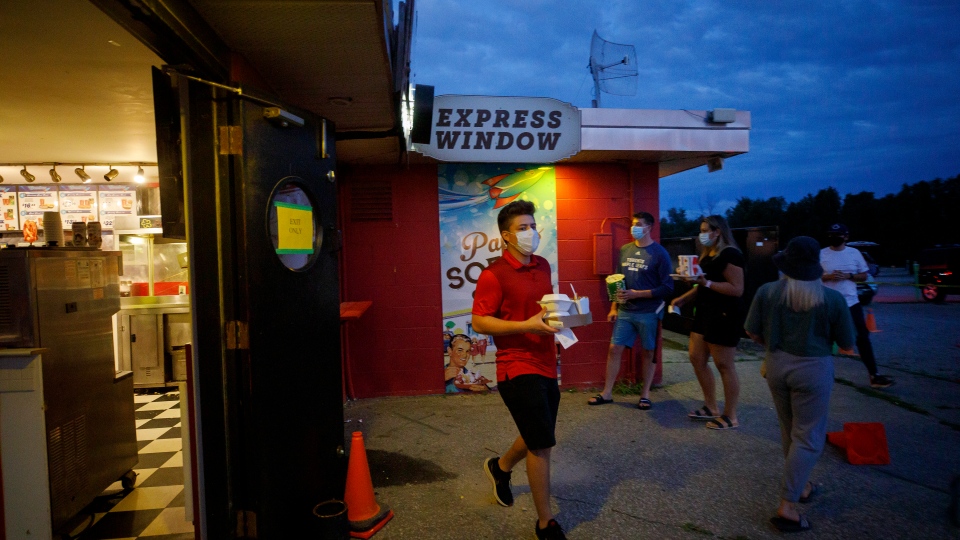 Moviegoers get popcorn and snacks at the 5 Drive-In Theatre in Oakville, Ont., during the premier of Jay Baruchel's movie Random Acts of Violence, Wednesday, July 29, 2020. THE CANADIAN PRESS/Cole Burston

One of his 5 Drive-ins was at Hamilton, Ontario, the city in which I was born and grew up.  I wonder if it was his theatre that I drove to from time to time with a date.  I can still remember watching the film Rock Around the Clock starring Bill Haley and the Comets there.

I guess Drive-in movie theatres is one business that did well during the pandemic.

PhD Principal
1.1  devangelical  replied to  Buzz of the Orient @1    one month ago

when I was a teenager in high school, the drive-ins on the weekends were the center of our social universe. I had way too much fun in them and dozens of indelible memories etched in my mind because of them. thank god they all disappeared here locally before my any of my kids had reached puberty. my karma would have taken a beating.

Professor Principal
1.1.1  seeder  Buzz of the Orient  replied to  devangelical @1.1    one month ago

One of the few drive-ins in Florida is right here in Ocala and it's been around for decades. At the height of the pandemic in April 2020 a customer with a compromised immune system called in and asked if there was any way he could be safe when order snacks (popcorn and drinks) the owner told him yes he could order ahead and pick it up at the take out window. The problem is they didn't have a take-out window but within 24 hours the owner had installed a pick-up window and all CDC protocols were followed. They stated that they have seen a 60 to 70% increase in business during the pandemic. They have been in business for 71 years.

Sophomore Participates
3  shona1    one month ago

Evening. Good memories and great times. Ours is long gone in the town unfortunately.