By:   By Chris Bengel CBS Sports

Lord Stanley suffered a little bit of damage on Monday 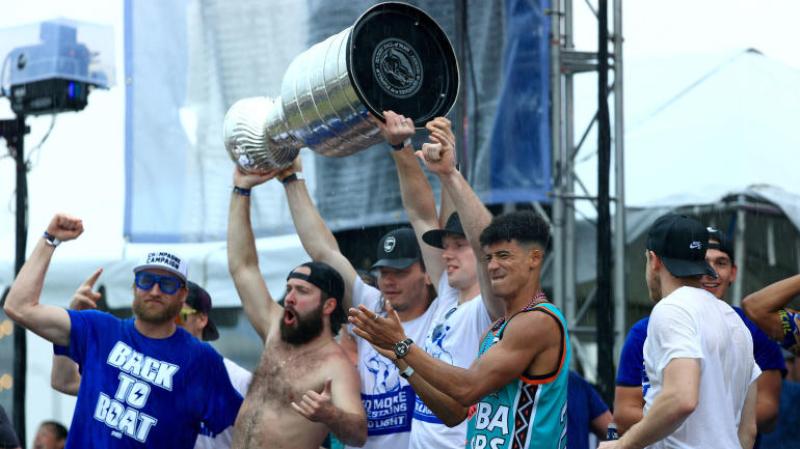 The  Tampa Bay Lightning  got a chance to celebrate their second Stanley Cup over the last calendar year on Tuesday. But during the celebration on the Hillsborough River, the Stanley Cup appeared to suffer a little bit of damage from the team's boat parade.

Bolt Jolts, which is a Lightning fan Twitter account, posted a photo of forward  Pat Maroon  holding the Stanley Cup. The top bowl of the Stanley Cup appeared to be dented.

Following the mishap, the Hockey Hall of Fame's "Keepers of the Cup" were seen carrying the Stanley Cup around with a blanket covering the damaged bowl and loading it into a car.  According to ESPN's Greg Wyshynski , the Stanley Cup will be sent back to Canada to be repaired.

It's unclear how the bowl of the Stanley Cup actually got damaged, but it clearly happened during Monday's festivities.

It's worth noting that the Stanley Cup has suffered some damage in the past.

After the  Detroit Red Wings  won it all in 2008, the Stanley Cup got pushed off of a table at Chris Chelios' bar in Detroit. The dent was hammered out by hand and fixed. The Lightning may have been a tad rowdier during this year's celebration due to the fact that fans attended the parade. With COVID-19 protocols more relaxed, players interacted with fans a lot more than they were able too during the last parade.

Americans find nasty ways to get even for the burning of the White House.

Well, Trump's tariffs and Biden's cancellation of the pipeline were more effective means of hurting Canada.  But, you know, they both have had and will have negative effects in the USA as well, but hey, people seem to like shooting themselves in the foot.

Men worse has happened to it in the past

lucky it wasn't made out of teeth...

Well puck that, we need an investigation of the so-called accident.