By:   By Dominic Green

After a white-nationalist attack, the media devote considerable resources to tracing the attacker’s ideas and search history along the ideological continuum and tarring the Republican Party with “complicity” in his crimes. After an Islamist attack, the imperative is not to establish politicians’ complicity with the criminal, but to avoid any inquiry that might amount to “Islamophobia.”

I spent Friday night like millions of other Jews, at the Shabbat table with my family, and then spent Saturday night like millions of other Jews, watching the phone for updates on the hostage situation at the Beth Israel synagogue in Colleyville, Texas. I went to bed thankful for the bravery and professionalism of the Federal Bureau of Investigation, puzzled as to how and why the hostage-taker, a British Muslim, ended up in a synagogue in Texas—and somehow not surprised.

I wasn’t surprised that it happened. This sort of crime isn’t yet normal, but it is starting to feel familiar. Familiar enough for Jewish parents to calculate the chances of getting caught in the statistical crossfire every time we take our children to synagogues, schools and Jewish-themed events. This is part of the reality of Jewish life in America today.

When you’re perpetually calculating these odds, the question of whether the person who might shoot up the place is a deranged Islamist or a deranged white nationalist is secondary. Yet it’s of primary importance to the media and political parties. Terrorism, like everything else in this balkanized society, has become a team sport, for both its protagonists and their cheerleaders. Perception, the battle of images, has become more important than reality to our politicians.

Political ideologies exist in a continuum, from the small number of true believers to the larger number of those who sympathize in some degree with the terrorist’s grievance but not his actions, and the largest number—those who, embarrassed by association, want to minimize or look the other way. The swing vote in presidential elections gets smaller every four years, making it more necessary to get out the vote in key sectors, and more tempting to exploit the full range of the ideological continuum, including the extremist fringe.
Two-party systems are great for parliamentary stability, but they require their parties to have broad appeal. When there’s a coalition to build and an election to win, it’s easy to ignore the company in which you’re traveling. That’s the sordid logic that in 2019 led Speaker  Nancy Pelosi  to pose with Rep. Ilhan Omar for the cover of Rolling Stone.

The result is that Islamist and left-wing terrorism are closely associated with the Democrats, and white-nationalist terrorism closely associated with the Republicans. The representatives of both parties deny their complicity with the extremists who incite these actions. But extreme elements in both parties recognize these associations and exploit them, especially to convert rhetorical points into votes. The Democrats are still making hay from misrepresenting President Trump’s maladroit response to the 2017 white-nationalist riot in Charlottesville, Va. Republicans will forever remind Kamala Harris that when the actor Jussie Smollett faked a hate crime with a script that implicated Mr. Trump, she leapt to decry “an attempted modern-day lynching.”

The problem is, the fellow-traveling and furtive incitement also get converted into terrorist attacks like the mass murders at the Emanuel African Methodist Episcopal Church in Charleston, S.C., in 2015 and the Tree of Life synagogue in Pittsburgh in 2018, and Saturday’s hostage-taking in Colleyville. When that happens, it is necessary to trace the attacker’s inspirations and establish the context of a crime—regardless of which team the attacker thinks he’s playing on.

After a white-nationalist attack, the media devote considerable resources to tracing the attacker’s ideas and search history along the ideological continuum and tarring the Republican Party with “complicity” in his crimes. After an Islamist attack, the imperative is not to establish politicians’ complicity with the criminal, but to avoid any inquiry that might amount to “Islamophobia.”

Stifling the debate in this manner reflects the preference of most American media for the Democrats, but that shouldn’t distract us from a reality that has implications for all Americans.

Anti-Semitism is a barometer of a society’s health—or rather its sickness, because anti-Semitism, whether that of the white nationalist or the Islamist, is at heart a spiritual disease. The unprecedented and rising levels of incitement and violence against Jews in the U.S. are warning signs of social breakdown. Anti-Semites are the proven enemies of a free and decent society, yet elected representatives of both parties continue to play footsie with them.

Just as Republicans like Rep. Paul Gosar need to cut loose from the white-nationalist subculture, so the Democratic leadership needs to disavow their fellow-traveling with Islamists. Speech isn’t violence, but it does have consequences.

Mr. Green is editor of the Spectator’s world edition.

We were immediately told: "It’s unclear how the individual entered the U.S. or if he had a criminal background."

Joe Biden was unable to share many details about the hostage situation, saying, "I just don't have enough facts." He said he will be holding a press conference on Wednesday, when he will have more details to share.

Akram, 44, had demanded the release of Pakistani neuroscientist Aafia Siddiqui, who is currently imprisoned in Texas for attempting to murder a U.S. soldier. Siddiqui has long been accused of helping militant Islamist groups, with terrorist organizations such as ISIS and the Taliban demanding her release. 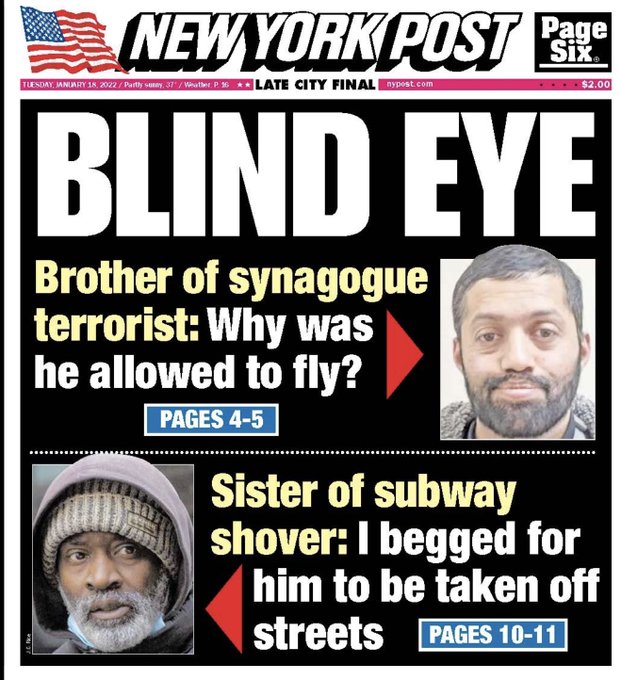 "Jewish leaders ripped the FBI on Monday and said the bureau “got it wrong” when they said the   terrorist who took hostages at a Texas synagogue   didn’t make demands that were “specifically related to the Jewish community,” reports said.

FBI Special Agent in Charge Matt DeSarno made the comments late Saturday when addressing reporters after four people, including a rabbi, were taken hostage at Congregation Beth Israel in Colleyville by   British national Malik Faisal Akram .

DeSarno noted that Akram was specifically focused on Aafia Siddiqui, a Pakistani neuroscientist who was convicted in Manhattan federal court in 2010 of   trying to kill US authorities   in Afghanistan, and his primary demand was her immediate release from prison.

“We do believe from our engagement with this subject that he was singularly focused on one issue, and it was not specifically related to the Jewish community. But we are continuing to work to find [the] motive,” DeSarno said.

Kenneth Marcus, founder and chairman of the Louis D. Brandeis Center for Human Rights Under Law, said “the FBI got it wrong” and the attack was “obviously a matter of anti-Semitism.”

No Ken it wasn't just insulting. They are covering their asses and those of their favored groups!

"Jesse Watters   expressed doubts over the possibility that the Texas synagogue hostage attack perpetrator was not known to law enforcement and said that some of the facts about the story were unclear, and potentially "suspicious," on " The Five " Monday.

"This guy wasn't on your radar?   Mr. President , you gave him a visa two weeks ago to come into this country. What kind of visa was it? Did you vet him? Was he on a watch list? Usually, the Feds are all over these people," Watters said. "And then they do a raid immediately in England with associates or people affiliated with them. So Scotland Yard didn't know anything about this? MI6 had no clue about this guy?

The attack took place at Congregation Beth Israel Colleyville during Sabbath services on Saturday. Authorities named a British citizen, Malik Faisal Akram, 44, as the perpetrator. The ordeal was stopped after about ten hours when the rabbi threw a chair at Akram, allowing everyone to escape to safety.

Akram was later killed during a standoff.

"This guy buys a hot gun off the street two weeks after he gets here? Who is the guy who he bought the gun from? They don't even know how he died. Who shot him? There's a lot of suspicious things about this story and a lot of unanswered questions. And hopefully, Joe has at least one of those answers in the next 48 hours because he should be asked about this."

In its initial response to the attack, the FBI had cast doubt over the possibility that the   Jewish community   was specifically targeted.

FBI agent Matthew DeSarno said, "We do believe from our engagement with this subject that he was singularly focused on one issue and it was not specifically related to the Jewish community. But we're continuing to work to find motive and we will continue on that path."

Following backlash the agency released a statement that said, "This is a terrorism-related matter in which the Jewish community was targeted and is being investigated by the Joint Terrorism Task Force."

Lisa Kennedy   said, "For that meathead spokesperson to come out and say it had nothing to do with the fact that this was a synagogue, a Jewish house of worship, that's absolute baloney."

"Everyone should be outraged about this. You have to be straightforward with people. That's the only way we can make society safer is if you're honest with people instead of trying to shellac things," she said. "So the FBI has egg all over its face."

I guess the FBI has become a leftist police force, not worthy of anyone's trust.

I think that this article has gotten this all wrong. The shooter is a British national. Only they or Interpol would have the information (if any). Being British means that he would have no ties to any party here. And here in NY, they have only called him a terrorist, so I am not sure what this article is going on about. Had he been homegrown, I would get this, but he is not.

This was the first "Islamist" attack in the US in years, but the right wants everyone to revert to the days when everyone was terrified of the Muslims in their neighborhood.

Anti-semitism is not province of the political right or left, it is a disease that has inflicted mankind for a thousand years.

This was the first "Islamist" attack in the US in years


but the right wants everyone to revert to the days when everyone was terrified of the Muslims in their neighborhood.

Oh ya, that was Obama's great fear. Those damn white people!


Anti-semitism is not province of the political right or left, it is a disease that has inflicted mankind for a thousand years.

That's so profound. Is that why so many avoided this story?

That's slipped under the radar.

How could I forget?

Nor did he civilize the world!

We are finding out more every day. There is no doubt the FBI was stonewalling info. You wouldn't argue that, would you?