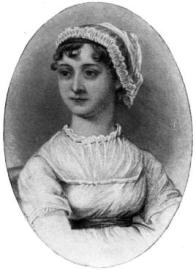 It is a truth universally acknowledged that marriage isn’t always in the cards.

Fanny Knight didn’t know what to do. She was supposed to be in love, but when it came time to marry, she couldn’t muster up much feeling for her intended. A concerned aunt warned her not to look a gift horse in the mouth—but not to marry too hastily.

“Nothing can be compared to the misery of being bound without Love,” the aunt wrote in an 1814 letter. “If his deficiencies of manner strike you more than all his good qualities, give him up at once.”

Auntie should know—she was Jane Austen, one of history’s most astute observers of love, marriage and flirtation. But though the novelist published six novels about love, including Pride and Prejudice , she never married. Not that she didn’t get the chance—she turned down multiple chances at long-term love.

Like her heroines, Austen was witty, pretty and flirtatious. And like the heroines she would later create, it was up to her to translate those charms into a financially stable marriage. At the time, marriage was a complex economic decision, because women’s wealth was tied up in the marriage market.

Women’s fortunes passed from their fathers to their husbands, who controlled their wealth until their death, and men had to decide on wives whose fortunes could help fund their lands and lifestyles. As a result, it was common for engagements to be contracted not for love, but for economic reasons—a common trope in Jane Austen’s novels.

For Jane, things were complicated by the fact that she had no dowry. Her father had financial difficulties and no money to pass on to his daughters, and Jane knew that she’d have to overcome that financial speed bump by being so charming or witty that a man could not refuse her. She got her chance in 1795, when she met Tom Lefroy.

The Irish nephew of a family friend, Lefroy piqued the 19-year-old Jane’s interest. She attended several parties with him and liked him enough to write about him to her sister, Cassandra, bragging that they had frequently danced and visited at several balls.

Then, in January 1796, Jane wrote an intriguing letter to Cassandra. “I rather expect to receive an offer from my friend in the course of the evening,” she wrote. “I shall refuse him, however, unless he promises to give away his white Coat.”

It’s unclear if Jane was referring to an offer of marriage or just of a dance—but Jane’s biographers have speculated about it ever since. Either way, the youthful romance (if it was a romance) soon fizzled out. Lefroy moved back to Ireland and eventually became Ireland’s most senior judge.

Jane’s financial situation may have contributed to Lefroy’s lack of interest, but in 1802, a 21-year-old Jane got another chance at love. She was visiting friends when Harris Bigg-Wither, a brother of her friends, proposed to her. By then, Jane was relatively old in a world where women married young. Bigg-Wither was six years her junior, but she accepted him anyway.

The story might have ended there, with Jane Austen becoming Jane Bigg-Wither and her extraordinary life becoming an ordinary one of marriage and motherhood. But the day after accepting Biggagement.

It’s unclear if Jane did so because of her sisg-Wither’s proposal, Jane did something astonishing: She broke the enter, Cassandra , who was mourning the death of her fiancé, or if she just didn’t like Bigg-Wither—which would explain the letter to her niece about the perils of marrying without love. It’s a sentiment she expressed in her novels, too—though she also famously wrote , tongue in cheek, that “Happiness in marriage is entirely a matter of chance.”

There may have been another reason entirely. Though Jane and Cassandra were financially dependent on their family as spinsters, they may have decided to pursue lives that weren’t reliant on the whims of husbands and children. And Jane, who had been an avid novelist since she was a teenager, may have feared that life as a wife and mother would have interfered with her writing.

Austen went on to become one of literature’s bravest explorers of the rocky waters of love and marriage—and though she never married herself, she had plenty of experience with both topics. And the fact that she stayed single may be the reason we have her books to begin with.

After Jane turned Bigg-Wither down, she never had another brush with marriage—that we know of, that is. And we’ll never know, thanks to Cassandra Austen. After Jane’s death, Cassandra burned the vast majority of her correspondence. It was a common move at the time, and may have been the family’s way of controlling Jane’s legacy as an author and a biographical figure.

The fact that Cassandra torched Jane’s correspondence doesn’t necessarily mean she had something to hide. However, it does mean that biographers and fans must look to Jane’s witty books—not her personal papers—for clues about her attitudes toward love. Given Jane’s portrayal of bumbling proposals, thwarted crushes and a ruthless marriage market, it’s tempting to think that her love life was even more colorful than we know.