Trump’s call with the leader of Ukraine has prompted an impeachment inquiry as Democrats condemn what they call brazen efforts to extract political favors. headshot By Nick Visser

The texts were released late Thursday by the chairs of three House committees, who wrote in a letter to colleagues that they had “grave concerns” after speaking with State Department officials as part of the chamber’s unfolding impeachment inquiry into President Donald Trump ’s July 25 call with the leader of Ukraine. The three chairs wrote that the shocking texts were “only a subset of the full body of materials” that had been obtained, the entirety of which they planned to release in the coming days.

(Read the full document at the bottom of this article.)

The text message were largely sent by Gordon Sondland, the U.S. ambassador to the European Union, and Kurt Volker, who was until last month the State Department’s special envoy to Ukraine, to Andriy Yermak, a top aide to Ukrainian President Volodymyr Zelensky .

In one instance that appears to be an overt quid pro quo, Volker texted Yermak just hours before the two presidents were set to speak. In the message, Volker said the White House would work to “nail down the date for [a] visit to Washington” but only on the assumption that “President Z convinces trump he will investigate/‘get to the bottom of what happened’ in 2016.”

Trump’s July 25 call with Zelensky has become the flashpoint for a Democratic impeachment inquiry after a reconstruction of the call showed multiple instances of Trump pressuring his counterpart to investigate a prime political rival, former Vice President Joe Biden, and his son Hunter.

In the texts, Yermak later wrote that the call  “went well” and that Trump and Zelensky had agreed on a visit to the U.S. Later in August, however, Yermak pressed Volker to nail down the date, saying that once it was locked in, Ukrainian officials would outline their “vision for the reboot of US-Ukraine relationship, including among other things Burisma and election meddling in investigations.”

Hunter Biden served on the board of Burisma, a Ukrainian energy company, for five years, ending in early 2019.

Yermak also texted Volker at the end of August expressing concern about a report Trump was withholding military aid to Ukraine. Trump canceled a planned visit to Poland to meet Zelensky a day later.

The text messages also show concern among some Trump administration officials. In multiple instances, Bill Taylor, the top U.S. diplomat to Ukraine, expressed worry that the White House was withholding military aid until any investigations into Biden were launched.

“Are we now saying that security assistance and WH meeting are conditioned on investigations?” Taylor asked Sondland on Sept. 1. Sondland later replied “call me,” and it’s unclear what the pair discussed. 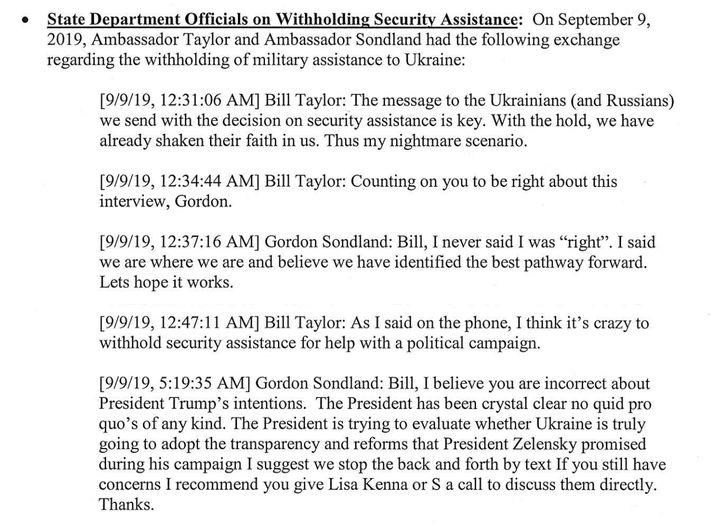 But the issue came up again a week later: “As I said on the phone, I think it’s crazy to withhold security assistance for help with a political campaign,” Taylor texted Sondland on Sept. 9, saying diplomacy had moved into his “nightmare scenario.”

Sondland later rejects that characterization, saying Trump had “been crystal clear no quid pro quo’s of any kind.”

The lawmakers expressed worry about the White House effort to delegitimize the impeachment inquiry, saying the Trump administration was “engaging in a campaign of misinformation and misdirection in an attempt to normalize the act of soliciting foreign powers to interfere in our election.”

Trump has vehemently rejected claims that he did anything improper, referring to the inquiry as a “ coup .” On Thursday, the president publicly urged China to investigate the Bidens just moments after saying that “if they don’t do what we want, we have tremendous power.”

In the letter, the chairmen urged their colleagues to reject such claims, calling them “unethical, unpatriotic and wrong.”

“We hope every Member of the House will join us in condemning in the strongest terms the President’s now open defiance of our core values as American citizens to guard against foreign interference in our democratic process,” they wrote.

This article has been updated with details about the text messages.