Two news leftists who initially sided with the rioters found out that their ‘solidarity’ was severely misplaced when rioters broke into their own buildings.

Leigh Tauss, the editor of a leftist – excuse me – ‘progressive’ news outlet in , North Carolina called “Indy Week,” initially tweeted that the protesters were extremely peaceful.

A few short hours later, her tone changed as she ran to the basement to hide.

Then when she was able to get back upstairs, she was “devastated” that they had trashed the news office. Gosh, don’t rioters have any favor for the left wing news? Apparently not. Anarchists don’t care about your business, your newspaper, your family, your bank, or you. Had Ms. Tauss been close to the rioters, she could have been seriously injured. If they had decided to burn the place down, she might have died.

It’s ok, Ms Tauss, they trashed the CNN building too – are you happy to be in the company of the Communist News Network?

“Did you honestly believe that your “progressive values” would make you immune to this?”

Yep, she probably did, Shashi.

Then there was the case of the NBA reporter Chris Martin Palmer from ESPN in Minneapolis, who specifically told the rioters to burn down a 189 unit affordable housing development. Encouraging arson? Is that a crime?

But when rioters descended on his own neighborhood, he couldn’t resist calling them all “animals.”

“They just attacked our sister community down the street. It’s a gated community and they tried to climb the gates. They had to beat them back. Then destroyed a Starbucks and are now in front of my building. Get these animals TF out of my neighbourhood. Go back to where you live.” Chris Martin   Palmer

@ChrisPalmerNBA   “they cant “go back to where they live” you told them to burn it down. So burn it down only applies to their house, not yours.” @CamronZoey

In other words, it’s ok for leftwingers  to stand with the radical left as long as they’re not the target. If they become the target, suddenly things are different. Except it doesn’t work like that for rioters. They’ll burn down a bank, beat up elderly people, hit everyone with rocks, smash leftist news media buildings or any thing else that might get in their way.

It's amazing how stupid these left wing morons are.

These animals don’t even care what color you are. Nothing will prevent them from getting free stuff or destroying property others worked hard for.

I couldn't get the picture from the article and figured that was fitting.

Usually karma takes too long for my liking, not in this case though.

funny how fast they change their minds once it is their neighborhood being destroyed. 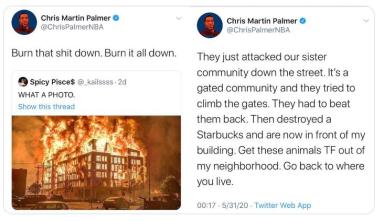