The Biden administration on Friday began a process to reverse a Trump-era policy that opened vast swaths of the largest U.S. national forest, the Tongass in Alaska, to logging and mining. The move is the latest effort to roll back a land use decision made under then-President Donald Trump, reflecting a growing emphasis on conservation over commercial development. In a notice posted on a White House website, the administration said it would propose "to repeal or replace" the exemption of the Tongass from the 2001 Roadless Rule that was finalized late last year. The Clinton-era rule banned logging, roads and mining in undeveloped forests. Alaska state officials had petitioned for the change because they said the rule has cost Alaskans jobs. In a statement, a spokesperson for the U.S. Department of Agriculture, which oversees the Forest Service, said "the Trump administration's decision on the Alaska roadless rule was controversial and did not align with the overwhelming majority of public opinion across the country and among Alaskans." Environmental groups cheered the decision and urged the administration to repeal the Trump policy entirely. "A full reinstatement of roadless protections is a necessity and crucial to preserving America's 'Amazon' and one of our most valuable assets in the climate fight," Andy Moderow, Alaska director of the Alaska Wilderness League, said in a …

If Trump didn't care, why should "we".

It is because "we" care that "we" are applauding President Biden for putting a stop to Trump's decimation of our national forests.

Biden, killing off the US economy thousands of good paying jobs at a time.

I am sure Alaskans will thank Biden for the loss of jobs. They only have a 6.7% unemployment rate; what is there to worry about?

Some are from the Native American and conservationist preserve the little bit of wildlands we have left camp, others are from the Viking rape and pillage camp. Hopefully there are more of the former than the latter. The last Presidential election seemed to indicate that is true, but only by about 7 to 8 million voters.

Next you'll be claiming that trees are necessary for our environment.  /sarc

Good. Not every piece of pristine land needs to be raped all so a very few can make a profit.

Excellent, it's old growth forest and does not need to be harvested.

Excellent article for those that believe it's great to cut down the forest. Alaska Natives have a say even if the BLM et al don't follow the rules.

The details matter. Allowing logging does not mean the whole forest is coming down. Some logging is actually good for the forest. Removing some trees is actually beneficial to the trees that remain. It doesn’t have to be all or nothing. One of the reasons we get massive, uncontrollable fires is because humans refuse to let anything happen in a forest in the name of conservation and fuel builds up. Then you get a fire that won’t burn out on its own and humans can’t put out either. Then the whole forest is destroyed.

Removing some trees is actually beneficial to the trees that remain. It doesn’t have to be all or nothing.

I agree that should be the way. But how often are logging companies leasing wildlands and leaving up all the healthy trees while only taking the dead trees or old growth trees that would allow the rest of the forest to flourish? Sadly, that's not cost effective and thus few major logging operations work that way. Selective logging does exist but it's often small outfits that lease smaller sections of forest or private land, often no more than 4 to 6 man operations. Opening up 9.2 million acres of the Tongass forest as the Trump administration did was not for the small operation selective logging outfits, it was for massive deforestation outfits who claim they're environmentally conscious because they plant a few thousand 6 inch seedlings in their clear-cut areas after they're done destroying an entire ecosystem.

You'd think it would be a straightforward enough thing to regulate. We need the wood; there are ways we can harvest it responsibly. It's amazing that after all this time, we still haven't figured that out.

Yet as with the Tongass National Forest, states like Alaska seem to want to jump to the worst case scenario, instead of pinpointing areas that will allow the most progress for the state, like the area outside of Juneau so it can expand. Ironically, Juneau has NO roads connecting it to the rest of North America and probably never will...

In a 585 page study addressing a petition by Alaska to exempt the Tongass from the 'Roadless Area' rule, they give 6 alternatives and recommend the 6th, which is FULL exemption. Ironically, the 'Roadless Area' rule already allows for timber harvesting if 'needed to protect public health and safety in cases of an imminent threat of flood, fire, or other catastrophic event that, without intervention, would cause the loss of life or property.' So EXISTING rules in those 9.2 million acres already mandates that 'needed' timber harvesting for fire prevention SHOULD be taking place.

The fact is that there are millions of acres of bark beetle killed trees all over the county, including in Alaska. THEY should be a priority for timber harvesting [logging] as they are basically giant torches just waiting to burn. There are builders in Colorado, which has about 3 million acres of dead trees, that are dedicated to using bark beetle killed lumber in all of their projects.

This is Tongass National Forest in 1990 when they were clear-cutting it before it was stopped. 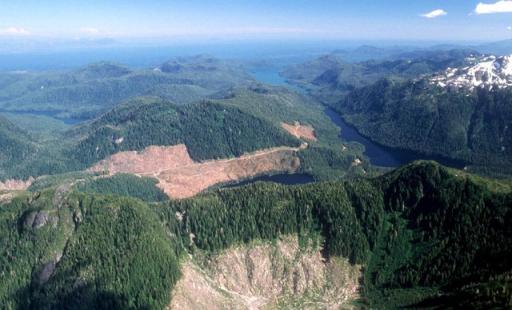 This is the Tongass National Forest in 2019 when they started clear-cutting again.