The surge in new COVID cases is putting an enormous strain on hospitals, jeopardizing patients who cannot get the medical attention they need because of a lack of space.

When U.S. Army veteran Daniel Wilkinson started feeling sick last week, he went to the hospital in Bellville, Texas, outside Houston. His health problem wasn't related to COVID-19, but Wilkinson needed advanced care, and with the coronavirus filling up intensive care beds, he couldn't get it in time to save his life.

"He loved his country," his mother, Michelle Puget, told "CBS This Morning" lead national correspondent David Begnaud. "He served two deployments in Afghanistan, came home with a Purple Heart, and it was a gallstone that took him out."

But for Wilkinson, help was still too far away. 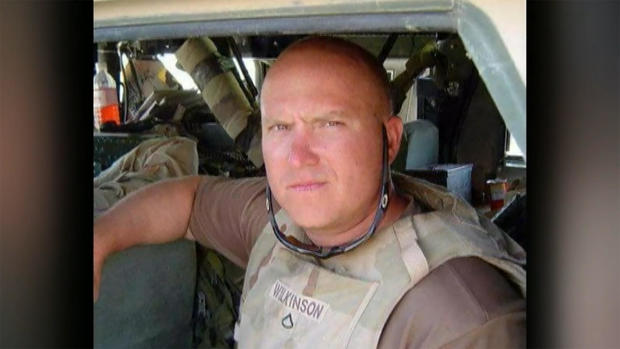 "I do labs on him, I get labs, and the labs come back, and I'm at the computer, and I have one of those 'Oh, crap' moments. If that stone doesn't spontaneously come out and doesn't resolve itself, that fluid just builds up, backs up into the liver, backs up into the pancreas, and starts to shut down those organs. His bloodwork even showed that his kidneys were shutting down."

Kakli told Begnaud that his patient was dying right in front of him. Wilkinson needed a higher level of care, but with hospitals across Texas and much of the South overwhelmed with COVID patients, there was no place for him.

Kakli recalled making multiple phone calls to other facilities, only to get a lot of, "sorry … sorry … sorry," in reply. Places had the specialists to do the procedure, but because of how sick he was Wilkinson needed intensive care, and they didn't have an ICU bed to put him in.

"Then I'm at my computer and, I'm just like, scratching my head, and I get this thought in my head: I'm like, 'What if I put this on Facebook or something, maybe somebody can help out?' One doctor messaged me: 'Hey, I'm in Missouri. Last time I checked, we have ICU beds. We can do this, call this number.' The next guy messages me, he's a GI specialist, he goes, 'I'm in Austin. I can do his procedure, get him over.' I said, 'Okay great, let's go.' He texts me back five minutes later: 'I'm sorry. I can't get administrative approval to accept him, we're full.'" 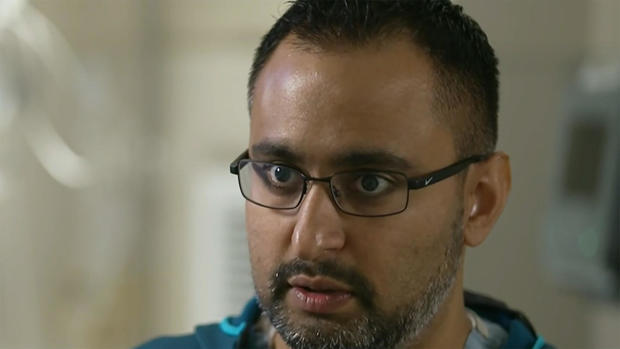 For nearly seven hours Wilkinson waited in an ER bed at Belville.

"I had that thought in my head: 'I need to get his mother here right now,'" Kakli said. "I said, 'If he doesn't get this procedure done, he is going to die.'

"I also had to have the discussion with him. ''Dan,' I said, 'if your heart stops in front of me right here, what do you want me to do? Do you want me to do everything we can to resuscitate you and try and get your heart back? If that were to happen, Dan, if I were to get you back, we're still in that position we're in right now.'"

"He said, 'I want to talk to my mom about that,'" Kakli told CBS News.

Finally, a bed opened up at the V.A. hospital in Houston. It was a helicopter ride away.

Kakli recalled Wilkinson saying, "Oh, man, I promised myself after Afghanistan I would never be in a helicopter again! … Oh, well, I guess."

Wilkinson was airlifted to Houston, but it was too late.

"They weren't able to do the procedure on him because it had been too long," his mother told Begnaud. "They] told me that they had seen air pockets in his intestines, which means that they were already starting to die off. They told me that I had to make a decision, and I knew how Danny felt; he didn't want to be that way. And, so, we were all in agreement that we had to let him go."

Roughly 24 hours after he walked into the emergency room, Daniel Wilkinson died at the age of 46.

Kakli told Begnaud that if it weren't for the COVID crisis, the procedure for Wilkinson would have taken 30 minutes, and he'd have been back out the door.

"We are playing musical chairs, with 100 people and 10 chairs," he said. "When the music stops, what happens? People from all over the world come to Houston to get medical care and, right now, Houston can't take care of patients from the next town over. That's the reality."

As of last night, there were 102 people waiting for an ICU bed in the greater Houston area.

Harris County Judge Lina Hidalgo told Begnaud that she was prepared to open a field hospital, but as of Friday morning, hospitals in the Houston area were telling her they had extra beds — but not enough nurses. Seven hundred nurses arrived last week, but it's still not enough to meet the demand.

It’s not just about the individual who chooses to not get vaccinated or mask up. It’s about all the other people impacted by those decisions.

And it’s not just about Covid. It’s also about all the other things that can’t be treated because Covid patients are clogging the hospitals.

Evening tacos..may come a time where they no longer treat patients over a certain age etc like they had to do in Europe..

Or reserve beds for other patients that do not have covid.

Not a good situation to be in full stop...

A combat vet dies because asswipes won’t get vaccinated, how sad is that.

A good man who served his country is now dead while anti vaxer/anti maskers come down with it and take up beds that should go to patients who deserve to have them.  Thank you for your service PFC Wilkenson and RIP.

A friend posted an open letter on Facebook from a doctor in Wheeling, WV.  The hospital in Wheeling is getting requests from as far away as Georgia and Texas to take patients for whom those states can't find beds.

Dr. William W. Brocklehurst, Emergency Medicine, Wheeling Hospital
It seems everyone thinks this is only happening in other States. Wheeling Hospital has opened a second pandemic unit due to the increased cases - something we didn’t even have to do last year. I personally have admitted way more Covid patients in the last 2 weeks than I have in the last 6 months. It never truly went away but the delta variant is starting to run rampant after a lull this Spring. I’d estimate 1/3 of the Covid patients I see now are fully vaccinated but thankfully those patients are rarely deathly ill but still vectors to spread the virus. The willfully unvaccinated are suffering and it will most definitely get worse.
School boards have been burdened with deciding how to handle a pandemic due to the inactions of their State legislatures. It seems the States want to shift blame to local non-medical authorities to avoid blame when the lock-downs begin again. The boards listen to the most vocal resident who are usually ill-informed and politically motivated but are voters. Only Steubenville and most colleges have mandated masks. Elementary schools are filling-up with unvaccinated students who will spread the virus throughout the community and, in some cases, pay a horrible price themselves.
Nurses are leaving the ER’s, ICU’s and floors in droves. We now have a shortage of staffed beds and even the tertiary care centers (WVU, Allegheny, UPMC) have warned us anyone needing transferred will be waiting 24-72 hrs for a bed. That is now, before the main surge actually happens.
All children less than 12 are unvaccinated. We were lucky last year due our rural population (although over 100 dead in Belmont County is hard to call lucky) and also fortunate the States mandated masks and social distancing. Those mandates do not exist anymore. Any child on a ventilator (and it’s coming) cannot be cared for in the Valley. These children will most likely sit in ER’s here for days until a bed opens up in a tertiary care center or shipped beyond a 200 mile radius if they survive. Last week Georgia and Texas hospitals were even calling Wheeling to see if they had available beds to transfer their adult patients to.
I just got off of a shift where I admitted 3 unvaccinated patients all needing oxygen and one on a ventilator most likely to die in the next few days. Let alone the others that got sent home as there is no cure and they were not sick enough.
Ask any ER, Hospitalist, or ICU physician in the Valley what they have been going through. You will get the same answer - we are getting crushed and this is only the beginning. I fear (and expect) a collapse of the system when all of the schools resume without a definitive plan other than “wear a mask if you feel like it.” We are already seeing it happen in other States.
I truly feel you can help by shining some light on what is happening in the Valley as opposed to national news that gives us a false sense of security in that they do not mention us.
I also apologize for any grammatical errors or rambling as I’m doing this on my iPhone at the end of a shift filled with preventable tragedy.
William Brocklehurst, M.D.
Board Certified Emergency Medicine Physician at Wheeling Hospital

Where I do sympathize with the doctor, this entire thing could have been less severe if only states which have low vaccination rates had demanded more of their citizens.  The so called elected officials, primarily the governors, in too many states have not taken this pandemic seriously.  They live in their ivory towers, have lost touch with reality and what it means to care about the people who elected them.  They are in positions of power and could have had a powerful impact, but chose to dismiss the science in favor of conspiracies, misinformation, and hitching their wagons to an orange horse's ass.  Then there are those in the highest offices of the land that are just as bad if not worse.

Last I heard a wait time in the ER here is about eight hours.

A few weeks ago, our closest hospital treating severe Covid patients turned away a man who was transferred from a smaller hospital that wasn't equipped to handle severe cases.  That's the first time I've heard of them turning away a patient since right after Christmas, when all local hospitals were on diversion - not taking any patients for any condition.  That was kinda scary, knowing that if anybody was sick or injured, they'd be sent over an hour away, even if they were in a bad car accident or were having a massive heart attack or stroke.  The vaccine was just out, and nobody was yet fully immune, so catching Covid was a definite possibility.

Glad you brought it here. I put some sandpaper on it and moved it along.