"There is no greater honor for a Marine than to be called on to save Americans."

On Aug. 26, at around 5:30 p.m. ET, Ghost Company was rushing to save as many people as possible at the   Abbey Gate   of the Kabul airport before we were required to cease processing evacuees. We were supposed to have stopped an hour earlier, but we decided to keep working in the hopes of finding more passport holders or green cards.

Alongside many other members of the 2nd Battalion, 1st Marine, the Army and British paratroopers, the Marines and sailors of Ghost were pulling families out of the canal when a suicide bomber detonated his device from the other side of the water. All those working to save Afghans and Americans were fully exposed to the blast.

Nine of my Marines and a sailor   gave their lives   so that others may live, and almost 20 other members of the company were wounded by their side. Until that moment, I did not believe I could ever be more proud of their efforts by how they handled the surging crowds and chaos all week, but they proved me wrong.

A mass casualty event is something we prepared and trained for, especially our incredible corpsmen. It is defined by having fewer resources than necessary to process and handle those wounded. In our case, we had a third of our entire force to care for in a split second. But in less than 20 minutes after the bomb detonated, we had our first wounded at the airport hospital, which included a 10-minute drive time

Senior leaders at the operations center remarked they had never seen a mass-casualty incident response move so quickly. The entire V21 team worked incredibly smoothly and efficiently during this moment and we lived up to our name, The Professionals. We held security, we moved our wounded, and due to our training, we likely saved more than we should have.

If Ghost Company is anything, it is a family. It is resilient, and it is cohesive. In less than 24 hours after we returned to our billeting area after the attack, the company was back on the line and watching over evacuees. As my First Sergeant and I walked the lines that night, we saw the airport flag at half-staff, and we raised it back up.

There is no breaking this company. The Marines of Ghost and the rest of the V21 family were magnificent not only in that moment of horror, but also throughout an entire week of the most indescribable tragedy one could ever witness. Our combined efforts kept the Abbey Gate open when many others closed. It only paused when the Dept. of State couldn’t process evacuees fast enough.

As a result, V21 and the British Parachute Regiment processed over 30,000 people through the Abbey Gate.There is no greater honor for a Marine than to be called on to save Americans. To be the last on deck as those who need our help are pulled to safety. To lay down our lives for others. That is what my Marines did. They will always be my heroes.

To learn more about supporting the families of fallen military members, you can visit the Tragedy Assistance Program for Survivors, or TAPS.

Geoff Ball is a Marine captain who lost Marines at the Abbey gate and is a TAPS mentor. 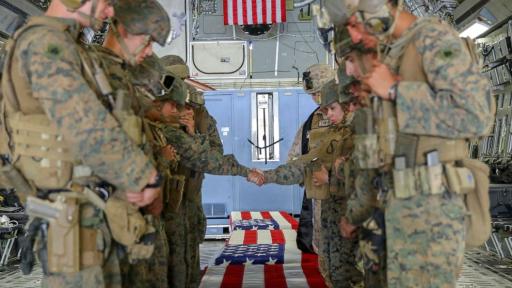