"Okay Ted, here we go...." the comedian wrote before launching into a thread directed at the Texas lawmaker's controversies

"Okay Ted, here we go...." the comedian wrote before launching into a thread directed at the Texas lawmaker's controversies

Texas Sen. Ted Cruz seemingly got more tweets than he bargained for this week when he taunted Patton Oswalt over Oswalt's comedy career and COVID-19 safety.

Cruz, 50, took the first shot, on Thursday re-tweeting a headline about Oswalt, 52, canceling stand-up shows in Florida and Utah because the venues wouldn't require audience members be vaccinated.

"Both of his fans were disappointed," the Texas Republican, who has a habit of social media provocation, wrote above the article.

Oswalt responded in-kind, taking Cruz to task for a number of controversies and gaffes in a thread directed at the former Republican presidential candidate.

"Okay Ted, here we go.... Not as disappointed as Texas was when you cut your Cancun vacation short and came home," Oswalt wrote first, a nod to Cruz's much criticized February trip to Mexico as his constituents went days without water or heat during a deadly winter storm. (Cruz called it a "mistake.")

Oswalt continued: "Ted, you Tweeted this at 1am. Put the phone down and return to liquid form for a few hours."

And then, in a reference to Cruz's objection to the presidential election results shortly before pro-Trump rioters stormed the U.S. Capitol : "Ted, my fans are all at home, waiting to see you at the January 6th hearings."

The comedian ended his thread by saying he had "fun" and calling Cruz "a friendless, cowardly embarrassment" whose "beard looks stupid."

This is far from Cruz's first war of words. The former debate hall of famer has a willingness to wade into back-and-forths with people ranging from Mark Cuban to Seth Rogen.

Even those in his own party have reportedly had a hard time finding Cruz likable.

Former South Carolina Gov. Nikki Haley reportedly "burst into laughter" after a meeting with him in 2016 where she found him "awkward" and "insincere."

And former Speaker of the House John Boehner once called him "Lucifer in the flesh" and a "miserable son of a bitch." Boehner also reportedly told Cruz "go f--- yourself," while recording his audiobook.

Cruz is disliked by everyone. Even his wife hates him!

His kids aren't big fans either.

Professor Guide
1.2  Paula Bartholomew  replied to  JBB @1    one week ago

After Trump totally dissed her and not only did Cruz not defend her but became a total maggot and went on to glue his lips to Trump's ass having drunk the kool aid.  Why she still stayed with him is beyond me.  I would have gotten me a top notch divorce lawyer and took him to the cleaners. 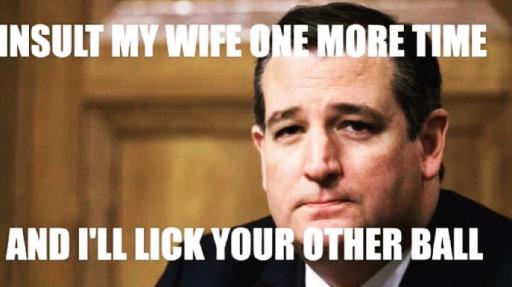 ever since then, heidi does ted with a strap-on while making him wear a tutu, nipple clamps, and bunny ears.

The bunny ears are a nice touch

a pippi longstocking braided pigtails wig seemed a bit much...

PhD Principal
2  MrFrost    one week ago

Who the hell provokes a professional comic that hates you?

If you poke a hornet's nest with a stick, be prepared to get stung.

When the going gets tough Ted heads to Cancun.