The New York Post took a victory lab Tuesday following confirmation of their original reporting that Hunter Biden's laptop contained emails showing he used his powerful name in his overseas business dealings in Ukraine and China.

The New York Post editorial board took a victory lap Tuesday following confirmation of its original reporting that Hunter Biden's laptop contained emails showing he used his powerful name for influence in his overseas business dealings in Ukraine and China.

The laptop story, which was originally published in Oct. 2020, received intense pushback from the mainstream media, including major outlets CNN and MSNBC, and faced an unprecedented suppression campaign by Big Tech giants Twitter and Facebook ahead of the November U.S. presidential election.

The story, however, was confirmed in part to be true in a Tuesday report by Politico journalist Ben Schreckinger, whose new book presents corroboration that some material on the laptop was authentic.

"While we appreciate the support, the truth is The Post's reports always have been true, and it's only because the media wants to protect Joe Biden that they keep referring to the laptop as 'unsubstantiated,'" the Post's editorial board wrote.

The board noted each of the points made in Politico's report and how it supported The Post's reporting from the original story, including former Biden associate Tony Bobulinski already confirming that the emails were authentic and emails released by the Swedish government, from which Biden rented office space in 2017, that matched emails on the laptop.

"All of this information is out there. Yet the [New York] Times still called the laptop 'unsubstantiated' last week (until it quietly corrected the story). And even as Politico credited its reporter, it added, 'While the leak contains genuine files, it remains possible that fake material has been slipped in,'" the board wrote, citing left wing media attempts to continue denying the validity of The Post's reporting.

"What part? The pictures of Hunter smoking crack?" it added.

The board noted that Politico's report also detailed inquiries submitted to the White House on whether or not then-Vice President Joe Biden attended a dinner with Hunter and a Ukrainian Burisma adviser in 2015. Politico said the White House pointed them to a "fact-check" done by The Washington Post downplaying Biden's attendance at the dinner.

"It's the perfect example of how Democrats weaponize 'fact checkers' to deflect criticism and enlist social media to censor articles. Nothing to see here!" it added.

"The laptop is 'unsubstantiated' because the media doesn't want it substantiated. We figure that won't change, but thanks, Mr. Schreckinger, for at least bucking the trend," the board wrote.

It only took Politico ten months!

At least they admitted it. Some here still refuse.

Some here live in deep denial.

As deep as the ocean!

ew York Post is a tabloid on par with The Enquirer.

This is a textbook  ad hominem logical fallacy.

ther than no evidence being provided, why wo

Did you read the referenced  Politico story?   Tough look for you..

Did you read the referenced  Politico story?

Did you?  Didn't think so.  Politico story was about, yet, someone else that has found this evidence.  Now let's see what the next anonymous person said:

A lot of right wing opinion pieces do not equal the truth, no matter how many times they are repeated, or how often.

Funny you claim that after Politico confirmed the tory was true.

Exactly.  How desperate some must be to have all these nothing to see here hit pieces about Hunter Biden.

Hint, he's not the President.  Joe Biden is

Many have known that for years and yet many of your like minded friends use it as factual reporting.

Hey Vic, do you disagree with JBB ? And feel that the Post is 'More' tabloidish than the Enquirer...? Enquiring minds want to know, or, they would not be Enquiring.....

"Insider obtained emails indicating that Hunter Biden asked for a $2 million annual retainer plus “success fees” to help unfreeze Libyan assets during the Obama administration. The communications offer “a window into the mechanics of Beltway influence peddling and the stock that was put in Biden’s political connections,” as my colleague writes.

The Obama administration froze up to $15 billion in assets during Muammar Gaddafi’s rule. In 2015, long after Gaddafi’s ouster and death, two Democratic donors with business in the Persian Gulf pitched Hunter Biden about joining their cause.

The two donors were frank in discussing Hunter Biden’s connections: “Since he travels with dad he is connected everywhere in Europe and Asia where M.Q. [Gaddafi, also spelled Qaddafi] and LIA [Libya Investment Authority] had money frozen. He said he has access to highest level in PRC [China], he can help there,” Sam Jauhari, one donor, wrote in January 2015 to Mohammed al-Rahbani, another donor.

Lots of people out there that use their names to gain influence, is it illegal? No. Even if this story IS true, (which I doubt seriously), who cares? If the Post is trying to get me to not vote for Hunter Biden in the 2020 election, they "win". I didn't vote for him.

ven if this story IS true, (which I doubt seriously), who cares

Lol... Time for another seed about Trump Jr, eh?

Well, since YOU brought him up... 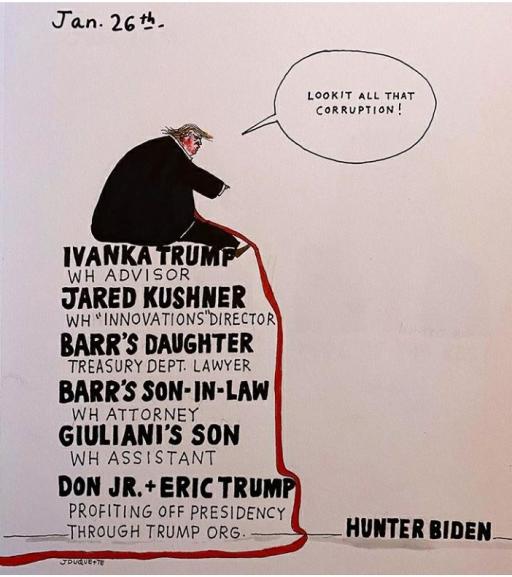 The criminal  enterprise family.  Too stupid to know the old adage 'Don't shit where you eat'

His 'presidency' was his biggest criminal enterprise

They’re well-known names in Democratic politics — Kerry, Clyburn, Hamilton, Gregoire, Mikva and Emanuel — but have received little attention because they’re not taking jobs in the senior-most ranks of the government. They are:

• Cameron Kerry, the brother of an early Obama backer, Massachusetts Sen. John Kerry, who has been tapped as chief counsel at the Commerce Department

• David Hamilton, nephew of former congressman and Democratic elder statesman Lee Hamilton, who was appointed to an appellate judgeship

• Courtney Gregoire, daughter of Washington Gov. Chris Gregoire, who last week was tapped as director of legislative affairs at Commerce

• Laurie Mikva, daughter of legendary former Chicago judge and Congressman Abner Mikva, who was appointed to the board of the Legal Services Corporation, which provides legal aid to low-income people

• And   Ezekiel Emanuel , brother of White House chief of staff Rahm Emanuel, who is a special adviser on health care to OMB Director Peter Orszag

The " Obama people," as they came to be called, had known him since he was Michelle's boyfriend, or a fresh-faced Illinois state senator, or a candidate crushed in a 2000 campaign for the U.S. House.
Among friends and political allies he found his first two chiefs of staff,  Rahm Emanuel  and William Daley; two senior advisers, Valerie Jarrett and  David Axelrod ; and two Cabinet secretaries,  Arne Duncan  at the Education Department and Penny Pritzker, still at Commerce.
A top economic adviser, Austan Goolsbee, was a fellow professor at the University of Chicago.
Two chiefs of staff to the first lady were, like Michelle Obama, Chicago lawyers: Susan Sher and Tina Tchen.
You must be logged in to post a comment
Loading...
Loading...