A U.S. District Court judge says he wanted to send a message with his sentencing of Paul Hodgkins. It is the first resolution of a felony case stemming from the insurrection.

Capitol Rioter Who Walked On Senate Floor On Jan. 6 Sentenced To 8 Months In Prison 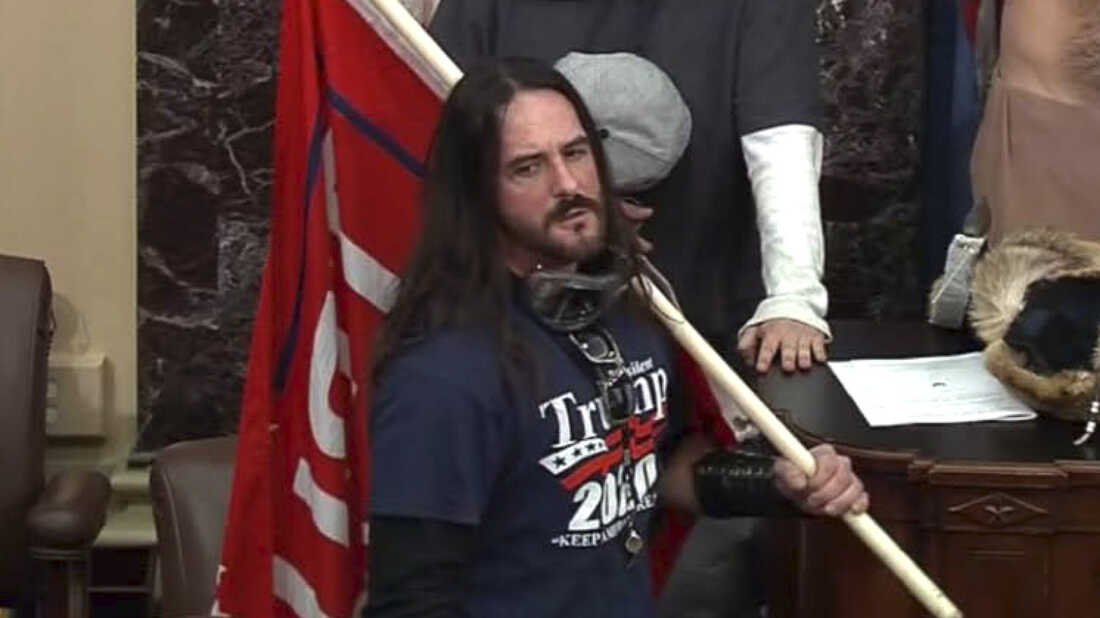 In this image from U.S. Capitol Police video, Paul Hodgkins of Tampa, Fla., stands in the well on the floor of the U.S. Senate on Jan. 6. On Monday, he was sentenced to eight months in prison.

In this image from U.S. Capitol Police video, Paul Hodgkins of Tampa, Fla., stands in the well on the floor of the U.S. Senate on Jan. 6. On Monday, he was sentenced to eight months in prison.

A Florida crane operator who walked onto the Senate floor during the Jan. 6 attack on the U.S. Capitol has been sentenced to eight months in federal prison and two years of supervised release.

Paul Hodgkins' sentencing is the first in a felony case stemming from the deadly assault on the U.S. Capitol by a mob of Trump supporters. It is viewed as a potential bellwether for how other Capitol defendants charged with similar offenses are likely to be treated.

Hodgkins pleaded guilty last month to a single count of obstructing an official proceeding. On Jan. 6, he marched from then-President Donald Trump's rally near the White House to the Capitol, where he walked inside and onto the floor of the Senate while carrying a red "Trump 2020" flag.

In court Monday, Hodgkins, dressed in a dark suit with his hair pulled back in a pony tail, said he was "truly remorseful and regretful" for his actions on Jan. 6.

"I say this not because I face consequence, but because of the damage that day's incident caused, the way this country that I love has been hurt," he told U.S. District Judge Randolph Moss.

Hodgkins said he traveled to Washington, D.C., from Florida to support Trump, and he had no idea the crowd would later storm the Capitol. He said he got caught up in the passion of the day and entered the Capitol and walked onto the Senate floor.

"This was a foolish decision on my part that I take full responsibility for," Hodgkins said. "I do not nor will not make any excuse."

In Hodgkins' case, the sentencing guidelines range was calculated at 15 to 21 months. Hodgkins' attorney, Patrick Leduc, asked the court for no prison time. The Justice Department, in contrast, recommended 18 months, in part to send a strong deterrent signal to anyone pondering a future assault on the country's democratic institutions.

The judge explained in court how he decided on a sentence in between those recommendations.

"It's essential to send a message that this type of conduct is utterly unacceptable and that grave damage was done to our country that day," Moss said. "But at the same time, I do not believe that Mr. Hodgkins, other than having made some very bad decisions that day ... that he is a threat."

Moss noted that Hodgkins did not previously have a criminal record. He did not engage in violence on Jan. 6 or destroy property, and he was in the Capitol for less than 30 minutes. But his presence at the Capitol, Moss made clear, did contribute to the mob's ability to achieve its goal of disrupting the certification of the 2020 presidential election.

"Although Mr. Hodgkins was only one member of a larger mob, he actively and intentionally participated in an event that threatened not only the security of the Capitol but democracy itself," Moss said.

"Because of the actions of Mr. Hodgkins and others that day, members of U.S. Congress were forced to flee their respective chambers," he added. "I think it's worth pausing for a moment to think about that — that is an extraordinary event under any circumstances that the members of the United States Congress are forced to flee the building fearing for their physical safety."

The judge said the damage the rioters caused "will persist in this country for several decades." He said it will make it harder for the government to promote democracy abroad and harder to convince young Americans that democracy stands as the foundation of this nation.

He should have gotten more, butt it is a good start!

Hodgkins should lose his citizenship and be exiled to any country that would take him.