A Scandal For Every Month: The Biggest Botches, Failures, And Mess-Ups Of Joe Biden’s First 12 Months In Office

This section is for your own words, not someone else's cartoons.

The Biggest Botches, Failures, And Mess-Ups Of Biden's First 12 Months

Joe Biden has been in the Oval Office (or that weird set in the Eisenhower building’s South Court auditorium with the greenscreen windows) for a year now, and he’s already managed to make his short presidency known for a long line-up of scandals, botches, and slip-ups.

It’s too hard to narrow the list down to one top failure, although his disgracefully handled Afghanistan withdrawal may be the most sobering and inflation may be the one that played the biggest role in Biden’s tanking approval ratings. Even though Biden’s mess-ups tally up to far more than 12, it’s not hard to remember a Biden-enabled disaster for every month of the septuagenarian’s first year at the stern … or in the basement.

On his first day in office, President Joe Biden signed a list of radically left-wing executive orders, including an order requiring that schools must ignore the biological differences between male and female students from the athletic field to the bathroom if they wish to continue receiving federal funding. In Biden’s first week, Press Secretary Jen Psaki also signaled the administration’s plans to reinstate federal funding for abortions around the world with the reversal of the Mexico City policy, and the new president canceled the Keystone XL pipeline.

As Tristan Justice reported at the time, “Biden’s first 48 hours in office have launched the new administration with 17 executive orders, more than were issued in the first month of their presidencies by Donald Trump, Barack Obama, George W. Bush, and Bill Clinton combined.”

In February, Biden’s Centers for Disease Control and Prevention announced strict reopening guidelines that would keep many schools around the country shut down. “Only K-12 schools in cities and areas with low or moderate virus transmission can fully reopen for in-person learning, as long as physical distancing and mask-wearing is enforced,” Jordan Boyd reported on Feb. 12. “Any transmission rate beyond what is designated as moderate requires hybrid learning or ‘reduced attendance,’ limiting which children are allowed in the classroom at the same time.”

On the same day, CDC Director Rochelle Walensky admitted that far-left teachers unions that have worked to keep students out of school buildings over the course of the Covid pandemic had influence when the CDC created its school reopening guidelines.

As The Washington Post first reported , the Biden White House spent the month of March plotting with corporations to develop a “vaccine passport” system to force Americans to show their Covid papers in order to participate fully in society. “The passports are expected to be free and available through applications for smartphones, which could display a scannable code similar to an airline boarding pass,” the Post noted.

At the end of April, Biden announced his “American Families Plan,” a list of far-left spending priorities, many of which would become hallmarks of his struggling Build Back Bankrupt agenda. The goals of the proposed $1.8 trillion spending spree included extending government schooling fully into preschool and two years of taxpayer-provided community college.

Scandal follows President Biden’s troubled son Hunter around, as the country learned when the New York Post published damning information recovered from a laptop the younger Biden allegedly left at a repair store in late 2020. But further revelations about Hunter’s exploits emerged in May of last year, adding to the pile of unsavory behavior that may implicate the president himself.

New emails from Hunter Biden’s suspected laptop published on May 26 by the Post show that Joe Biden “met with Ukrainian, Russian and Kazakhstani business associates of his son’s at a dinner in Washington, DC, while he was vice president” in April 2015.

“Dear Hunter, thank you for inviting me to DC and giving an opportunity to meet your father and spent some time together,” wrote executive Vadym Pozharskyi of the Ukrainian energy company Burisma, where Hunter sat on the board.

Other emails published by The Daily Mail in May revealed that Hunter Biden bragged he “smoked crack with [former D.C. Mayor] Marion Barry” when he was a student at Georgetown University.

Biden’s crisis at the Southern border has been setting records all year, but it was in June that apprehensions surged past 1 million for fiscal year 2021 and border crossings were at the highest levels since 2006. In May alone, “170,000 people were captured, marking a 20-year high,” Gabe Kaminsky reported at the time. June also saw the border state of Texas declare an emergency over Biden’s border crisis, which the president helped cause by reversing Trump-era stances like the “Remain in Mexico” policy.

As the crisis raged, Biden’s border czar Vice President Kamala Harris couldn’t be bothered to visit the actual U.S.-Mexico line, snapping “I haven’t been to Europe” when reporters pressed her on the topic. She finally caved and scheduled a trip, but only after former President Donald Trump announced his plans to visit.

July: Bragging about Working with Big Tech to Silence Dissent

In July, the Biden administration bragged about colluding with Big Tech to shut down perspectives with which the regime disagreed. In a press briefing on July 15, Psaki touted the administration’s policy of “flagging problematic posts for Facebook that spread disinformation.” A few days later, Psaki admitted there was nothing “off the table” in the effort to smear dissent as “misinformation” and have it removed from social media.

August saw the largest-scale disaster on Biden’s watch so far, when the administration’s disorganized withdrawal from Afghanistan left 13 American service members dead and thousands of American citizens and allies stranded under Taliban control.

From the administration’s decision to vacate Bagram Air Base before evacuating Americans from the country, to leaving weapons and equipment to fall into the hands of the Taliban, to Biden taking an out-of-touch, hollow victory lap after the service members’ deaths and while Americans remained stranded, to the administration’s ongoing decision to ignore the allies still behind enemy lines, every action taken by the Biden team was a disaster. In the same month, the administration carried out a drone strike targeted at ISIS operatives that actually killed at least 10 civilians, seven of whom were children.

Americans won’t soon forget the harrowing images of desperate people trampling each other in the chaotic race to the Kabul airport, of people clinging to aircraft landing gear and falling helpless from the sky, or of a lone helicopter leaving the roof of the American embassy. There is blood on Biden’s hands, and our allies won’t soon forget it either.

September: Biden Lies to Undermine His Own Border Patrol Agents

After a photo of U.S. Border Patrol agents on horseback was misconstrued by Democrats and their media allies to falsely accuse agents of “whipping” criminals, Biden promised to make his own CBP employees “pay” and the White House banned agents in Del Rio, Texas from using horses going forward.

“It was horrible to see. To see people treated like they did? Horses running them over? People being strapped? It’s outrageous,” Biden claimed , even though the photographer who took the viral photo insisted he’d “never seen them whip anyone.”

On Sept. 29, the National School Boards Association sent a letter to the White House asking Biden to use the FBI and other federal law enforcement to target parents using terrorism laws. A few dayes later on Oct. 4, in response to the letter, Attorney General Merrick Garland directed the FBI and federal attorneys to investigate and address “a disturbing spike in harassment, intimidation, and threats of violence against school administrators, board members, teachers, and staff.”

As it turns out, however, Biden’s own Education Secretary Miguel Cardona appears to have secretly requested the letter from NSBA, presumably to use as a pretense for the administration’s push to target parents unhappy with public schools’ closures, mask mandates, and extremist LGBT and critical race theory curricula.

After issuing a September press release threatening a vaccine mandate for private businesses with 100 or more employees, Biden’s Occupational Safety and Health Administration (OSHA) released an emergency temporary standard on Nov. 4 that would require businesses to comply by Jan. 4 or incur fines of up to $14,000 per violation.

December saw the climax (so far) of Biden’s joint inflation and supply chain crisis, dually caused by the administration’s radical spending and Democrats’ Covid lockdowns. As Americans faced shortages and shipping delays during their Christmas shopping, the Department of Labor released its November figures revealing 6.8 percent year-to-year inflation, or “the largest 12-month increase since the period ending June 1982.”

December’s inflation numbers were even higher, clocking in at 7 percent.

In a Jan. 11 speech urging the U.S. Senate to ditch filibuster rules in order to pass his radical and unconstitutional federalization of election laws, President Biden compared his agenda’s critics — which  include  Democrat Sens. Joe Manchin of West Virginia and Kyrsten Sinema of Arizona — to former Alabama Gov. George Wallace and Confederate leader Jefferson Davis.

Who knows what new scandals and embarrassments await the Biden administration in 2022? For the sake of the country, we can hope for fewer than in 2021, but it’s clear the administration has a failed track record only one year in.

Elle Reynolds is an assistant editor at The Federalist, and received her B.A. in government from Patrick Henry College with a minor in journalism. You can follow her work on Twitter at @_etreynolds. 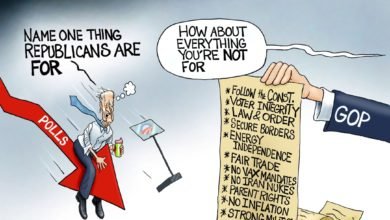 While Biden sinks in the polls he’s oblivious as to the reason thinking the GOP is out of touch. Political…

Joe Biden has been in the Oval Office (or that weird set in the Eisenhower building’s South Court auditorium with the greenscreen windows) for a year now, and he’s already managed to make his short presidency known for a long line-up of scandals, botches, and slip-ups. It’s too hard to narrow the list down to one top failure, although his disgracefully handled Afghanistan withdrawal may be the most sobering and inflation may be the one that played the biggest role in Biden’s tanking approval ratings.

Even though Biden’s mess-ups tally up to far more than 12, it’s not hard to remember a Biden-enabled disaster for every month of the septuagenarian’s first year at the stern … or in the basement.

Biden is giving the green light to one of our foreign adversaries to invade a neighboring nation.