Meet the Ukrainian refugee pets — and their humans — who arrived in St. John's | CBC News

There were more than just the 166 people aboard a chartered flight that flew Ukrainian refugees to St. John's last week. Also on board: eight cats and three dogs, which their owners simply could not leave behind.

There were more than just the 166 people aboard a chartered flight that flew Ukrainian refugees to St. John's last week. Also on board: eight cats and three dogs, which their owners simply could not leave behind. 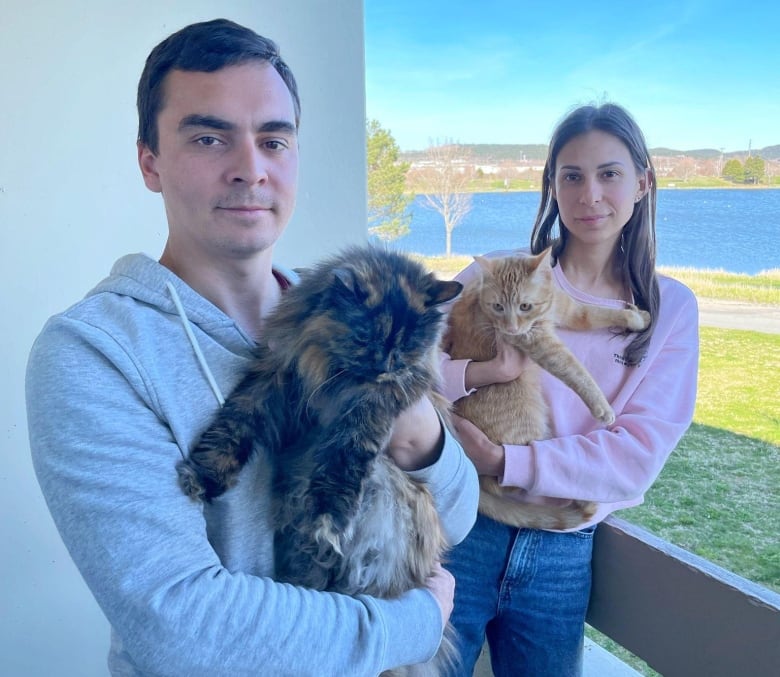 Olga and Ivan Antoniuk and their two cats, Bella and Simba, arrived in St. John’s after fleeing from Ukraine.

It turns out that Bella — a 13-year-old fluffy, skittish cat with kidney disease that, before last week, had never left her apartment in Ukraine — is a bit of a high-maintenance traveller.

Her stockpile of specialty food —120 individual packages of wet food, plus a hefty bag of dry food — took up most of the space in her owner's luggage.

Bella's age and health prevented her from being able to take the anti-anxiety travel medications her cat brother Simba took before the long journey.

Bella and Simba were two of 11 animals — eight cats and three dogs — aboard a flight from Poland to St. John's last week , a charter that the Newfoundland and Labrador government arranged for 166 people who fled Ukraine after Russia's invasion in February. 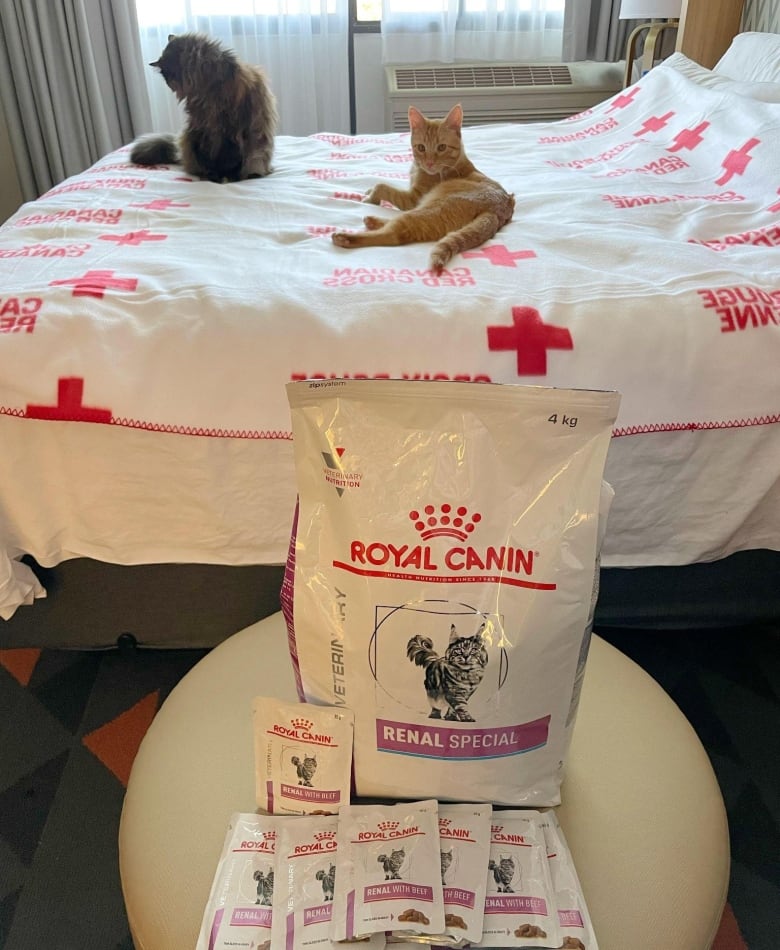 Bella, a 13-year-old cat with kidney disease, is on a strict diet, and because her owners didn’t know if they could find her food in St. John’s, they filled their suitcases with it.  (Caroline Hillier/CBC )

Before the war, Bella and Simba's owners, Olga and Ivan Antoniuk, operated their own real estate company.

"We had a good job and good money but once the war started, our business stopped," Olga Antoniuk told CBC News. 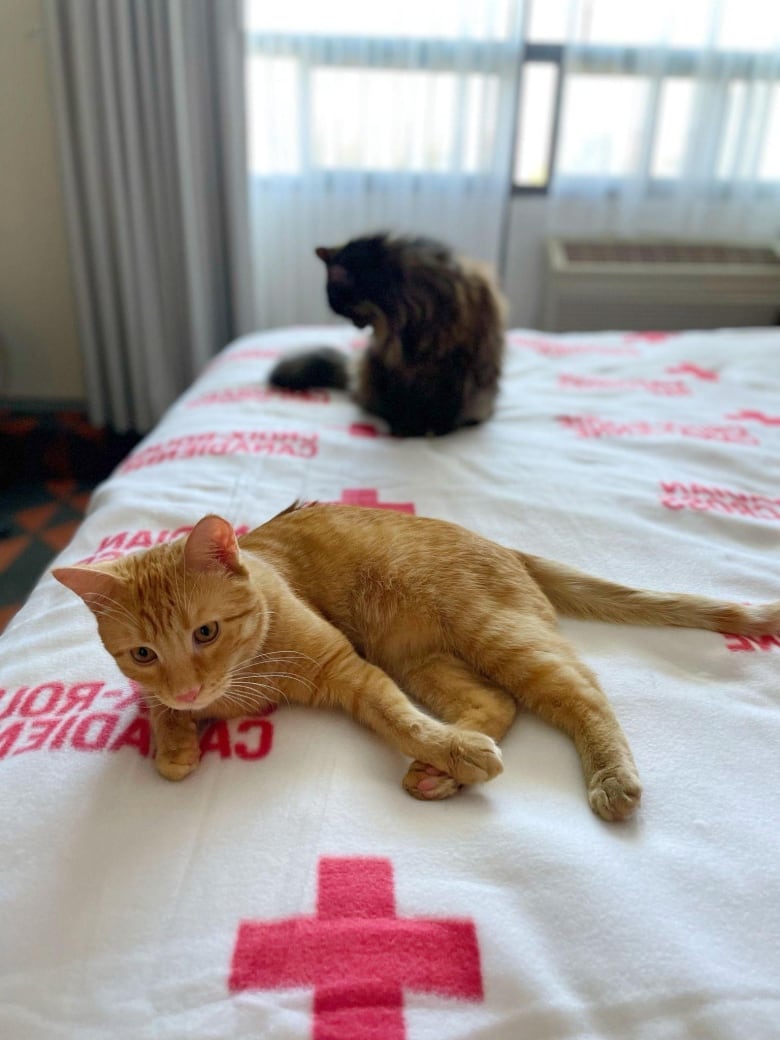 Bella and Simba enjoy lounging on their new fleece blanket, provided by the Canadian Red Cross when they arrived at St. John’s International Airport.

Before catching the flight to St. John's, Olga and Ivan drove from Ukraine to Poland — a stressful enough drive without having to stop every so often to use the litter box.

The couple decided to start fresh in Canada, and picked Newfoundland and Labrador because of its natural surroundings and "slow life."

The chartered flight and assistance that Newfoundland and Labrador's Ukrainian Family Support Desk provided was a surprising bonus. 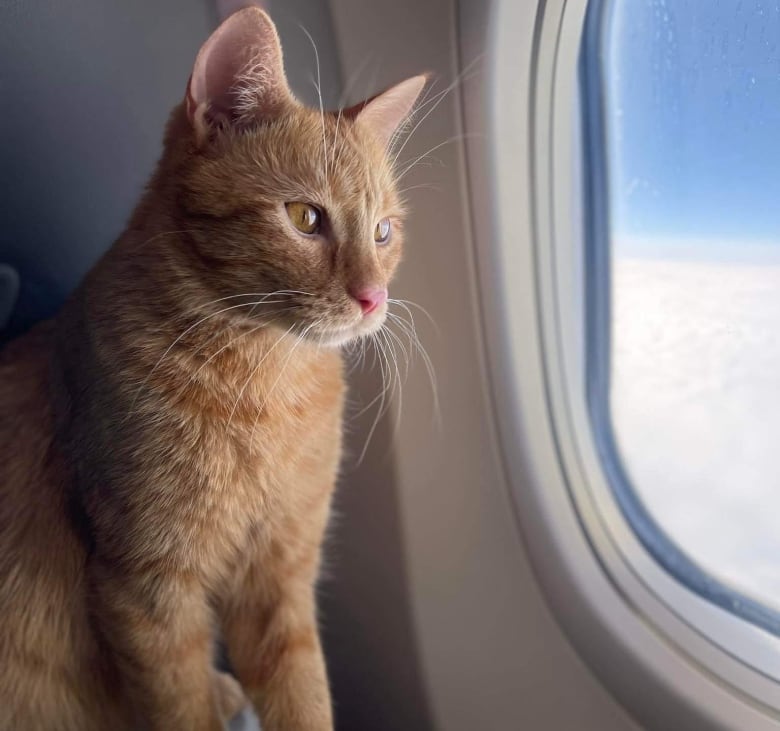 Simba, who has a limp paw and was once a street cat, enjoys the plane ride from Poland to Canada.

"I think it's so crazy. The free chartered flight, free hotel here, free food here for us and free food for my cats," she said.

"I [can't] describe this kindness for us and for our pets."

Bella and Simba sat in their owners' laps for takeoff and spent much of the eight-hour flight in their carriers. They were tired when they arrived but were shocked at their "celebrity welcome" at St. John's International Airport, said Antoniuk.

"We met a lot of people with the banners, with the flags and everything. Everyone will be very happy to look for us."

"I was in shock, really, but the shock [is] for kindness." 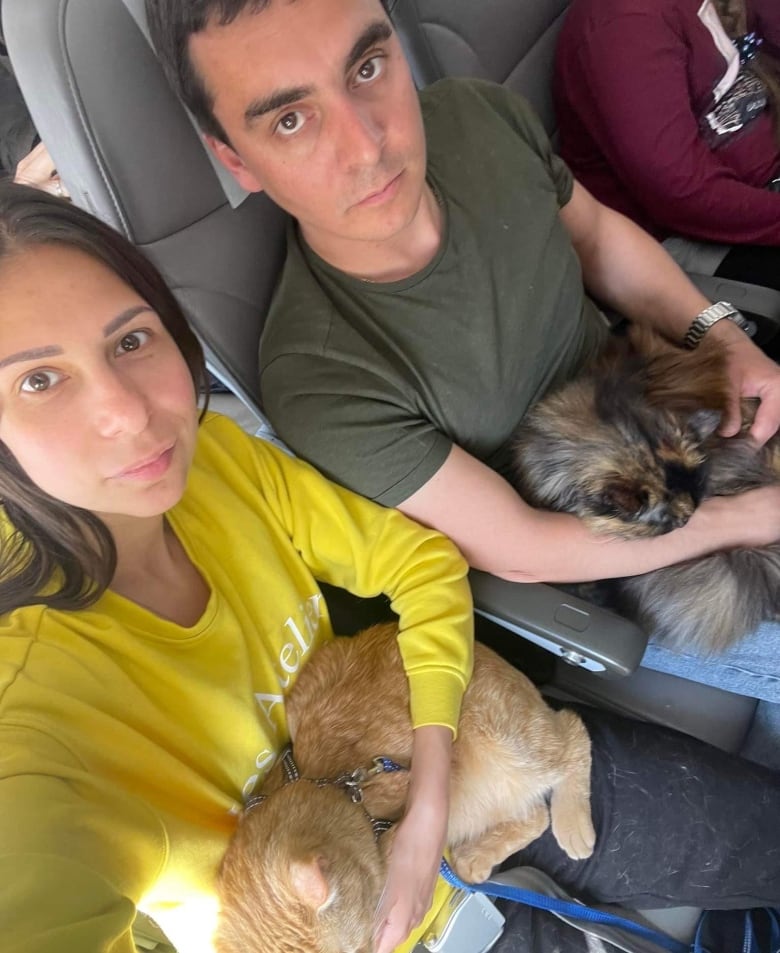 Olga and Ivan Antoniuk hold Bella and Simba on the flight to St. John’s.

An emotional meeting at the airport

Margo, a petite black and white cat, sat a few rows away from Bella and Simba on the chartered flight.

Margo's owner, Hanna Sukhinets, made the journey — which included a train ride, a bus ride and then finally the plane ride — with Margo and her mid-size dog, Dea. Her husband and their older dog are still in Ukraine. 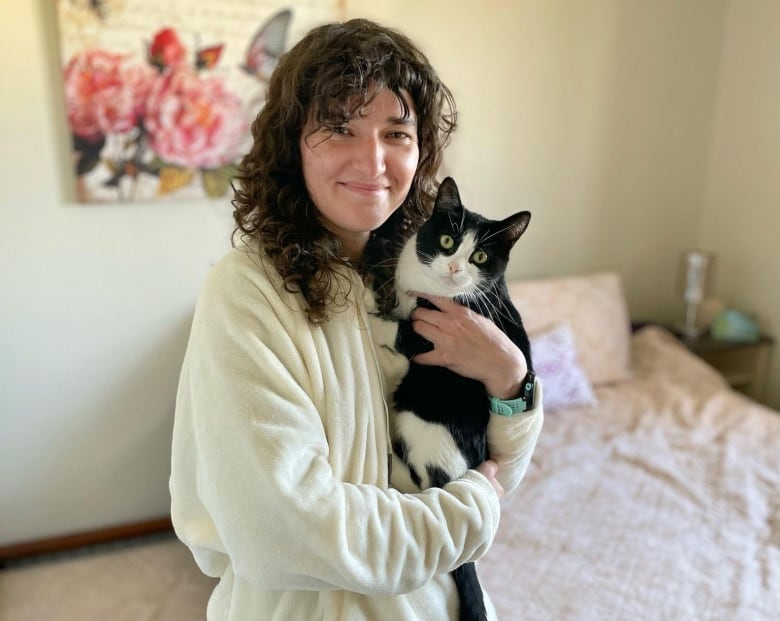 When deciding which part of Canada to move to, Sukhinets, a dog lover, settled on Newfoundland and Labrador partly because the province's name bears the name of two breeds of dogs.

She posted a photo of herself and her cat on social media, inquiring about accommodations in Newfoundland and Labrador. Lori Best replied, offering her a room in her house in Conception Bay South, just west of St. John's.

St John's Morning Show7:48From Ukraine to CBSHanna Sukhinets and her dog and cat made the journey from Ukraine to Conception Bay South to live with Lori Best and her family. They speak with the CBC's Caroline Hillier.

"I made a split-second decision that I was going to get in touch with her," said Best.

"She looked so sweet with her cat. So I decided and then I came home and told my family that I invited someone to come live with us," said Best.

Their meeting at the airport was emotional. 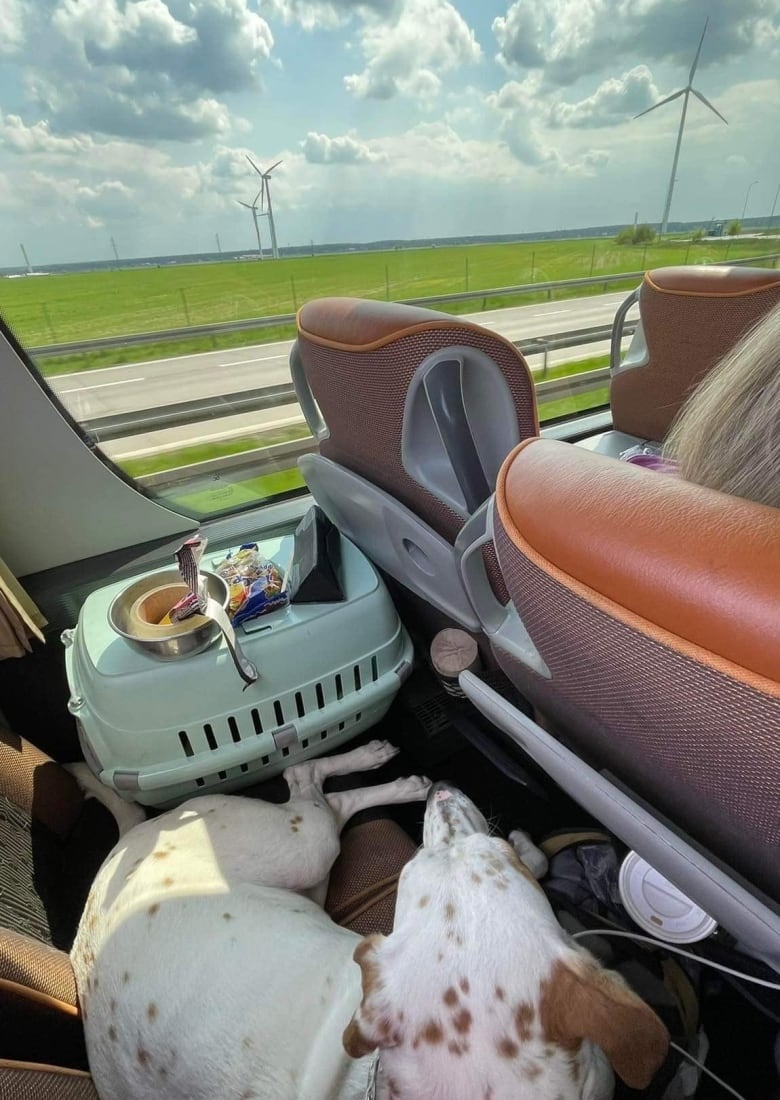 Sukhinets took a train out of Ukraine with Margo and her dog, Dea. In Poland, she boarded a bus to reach the chartered flight destined for St. John’s.

"When I saw the big dog carrier, I knew it was her and I started running towards her and gave her a great big hug and had some tears," said Best.

"It was amazing. I just had no words and was crying," said Sukhinets.

"The person which never met me just offered me a home and suggested me to be a part of her family. So I still can't believe it." 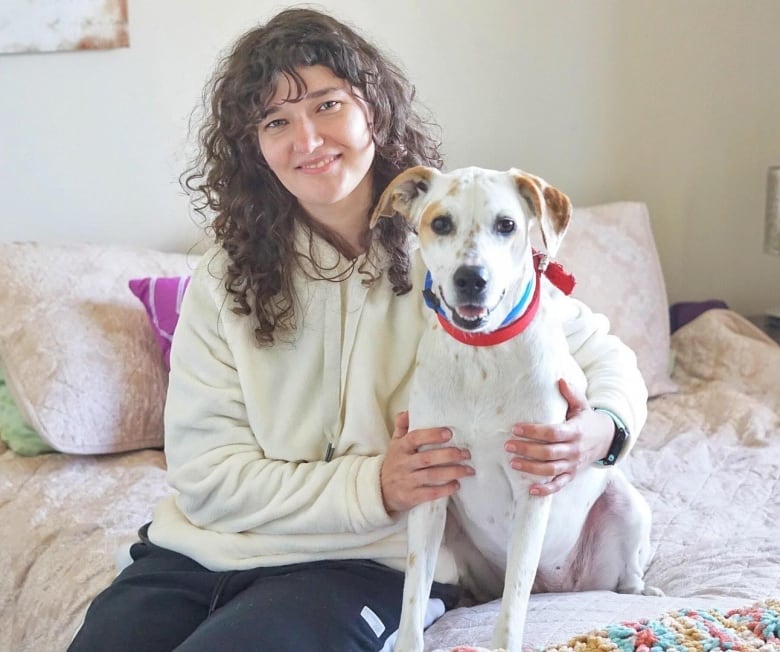 Leaving her pets behind was not an option.

"A lot of people in the beginning of the war, they left their pets and they died," said Sukhinets.

"[War] makes you decide what things are really important. When you hear those sounds like rockets go above the city … you try to be together at this moment," she said.

"No clothes, no documents, nothing [matters]. Except lives."

Sukhinets is grateful for the help she's received and is optimistic about her future but worried about her husband and the rest of her family in Ukraine, whom she said goodbye to at the train station.

"It was hard because I don't know if I will see them again." 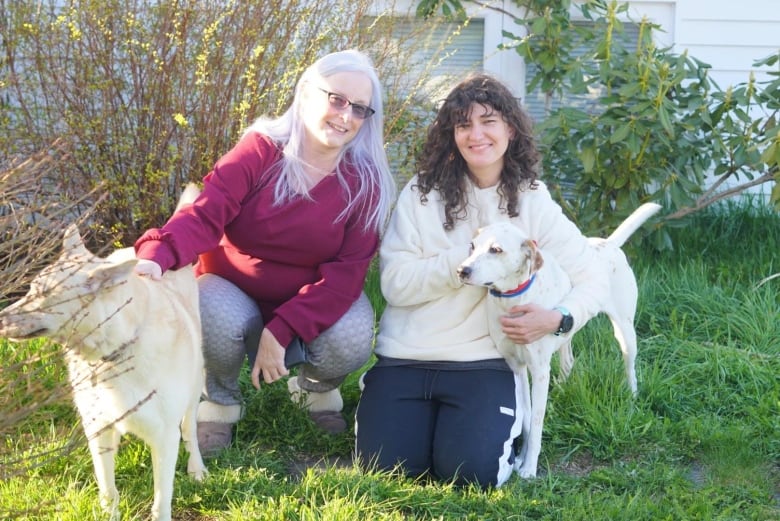 Lori Best, her dog Chloe, Sukhinets and Dea are all becoming friends.

This is a good thing

Junior Participates
3  shona1    one month ago

Good on you Canada...have sent $$ to Ukraine to help fed and shelter animals that have been abandoned.

I would never leave my cat either... wouldn't care what was coming bushfire, cyclone...

First thing in the car would be any animal I owned...

Professor Principal
4  Kavika     one month ago

The ''Animal Network'' is doing great work in Ukraine saving animals and the zookeepers in Krakiv have stayed with the animals through all the bombardment, two of these brave people lost their lives protecting the animals.

Good on ya Canada.

Evening Kavika...yes it does restore ones faith in humanity at times...

Hear all the doom and gloom, but little from the quiet achievers around our world...🐾🐾