As attorney general, he only cared about telling political stories, not serving justice.

A jury deliberated for just six hours before reaching a unanimous verdict acquitting former Hillary Clinton campaign lawyer Michael Sussmann, leaving the Barr-appointed special prosecutor John Durham with essentially nothing to show for his years-long attempt to find wrongdoing by the FBI and the Clinton campaign in the Trump-Russia probe.

Hours after the jury dismissed Durham's bull, BuzzFeed published a previously secret Justice Department report, also ordered by Barr, in which Barr's own DOJ concluded that the Obama administration didn't intend to expose the identity of Trump national security adviser Michael Flynn "for political purposes or other inappropriate reasons." It was further evidence that another favorite Trump claim enabled by Barr — that Obama officials engaged in illegal "unmasking" — was bunk.

The day after these twin repudiations of Barr's fantasies, the hoaxster explained himself on Fox News — by arguing that Durham's failure in court was in fact a triumph. "While he did not succeed in getting a conviction from the D.C. jury," Barr said, "I think he accomplished something far more important."

This is about as convincing as the Washington Nationals saying, "While we did not succeed in scoring a run for 27 innings, we think we accomplished something far more important." In a courtroom, a prosecutor either wins or loses.

So what did Barr think was more important than Durham actually winning his case? "He crystallized the central role played by the Hillary campaign in launching, as a dirty trick, the whole Russiagate collusion narrative," Barr said, and "he exposed really dreadful behavior by the supervisors in the FBI."

Durham didn't "crystallize" or "expose" anything. He packed his court filings with innuendo, and the jury decided he hadn't made his case. The only conviction Durham has earned to date was a plea deal with an FBI lawyer over a doctored email — and that wrongdoing was uncovered by the Justice Department's inspector general, not Durham.

But Barr's argument, that the innuendo Durham spread is "far more important" than proving actual wrongdoing, unmasks Barr's perverted view of justice. He didn't tap Durham (or John Bash, who handled the unmasking probe) primarily to prosecute criminal behavior. He launched the inquiries to tell a political "story."

"Part of this operation is to try to get the real story out," Barr told Fox News. "And I have said from the beginning, you know, if we can get convictions, if they are achievable, then John Durham will achieve them. But, the other aspect of this is to get the story out." Bringing a case for such a purpose violates Justice Department policy.

Running Trump's DOJ, Barr was all about telling stories rather than prosecuting wrongdoing. He sat on the Mueller report of the original Russia investigation, instead releasing his own purported summary that gave a misleading impression of Mueller's findings. Barr baldly alleged, "I think spying did occur" against the Trump campaign, but no proof has surfaced.

In fulfilling Donald Trump's demands to investigate the Russia investigators and those who allegedly "unmasked" Flynn, Barr wasn't seeking justice. He now admits that trying to make a case that the FBI acted in bad faith against Trump — as Republicans allege — would have been "onerous" and "a herculean case" and a "very hard thing to prove."

Barr was giving Justice cover to the reckless allegations being made by Trump and his allies. Barr made sure the lies had a lengthy head start to leave lasting impressions before any corrective could be issued.

Barr made space for Sen. Marco Rubio (R-Fla.) to predict "one of the biggest political scandals in American history"; for Sen. John Cornyn (R-Tex.) to proclaim a scandal "bigger than Watergate"; for Sen. Rand Paul (R-Ky.) to claim there was a "smoking gun found"; for Rep. Michael Turner (R-Ohio) to declare "a threat to democracy itself"; and for Rep. Devin Nunes (R-Calif.) to allege that Obama officials "were unmasking anyone and everyone so that they could leak information to a press that was willing to take that illegal information."

Now we know Trump's DOJ, in its own words, had "not found evidence" of inappropriate unmasking. And we see Durham's claim of wrongdoing in the Russia probe ending in swift acquittal.

Barr, unmasked, now claims the federal jurors in Durham's failed case violated their oaths by following political biases. "A D.C. jury," he said, "is a very favorable jury for anyone named Clinton and the Clinton campaign. Those are the facts of life. … There are two standards of the law, and we have had to struggle with that."

So, now, Barr is trying to discredit the centuries-old American jury system. It's just one more "story" he tells to replace the rule of law with the reign of innuendo.

Durham, humiliated and defeated, must slink away! 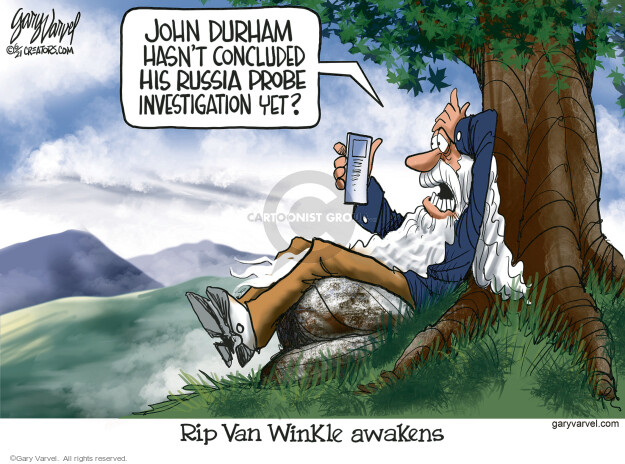 Barr is just ugly. Inside and out.