He's my sounding board. He's my safety net. And that's all gone now. And it's gone, for what? Politics?" she said on CNN's "The Axe Files. 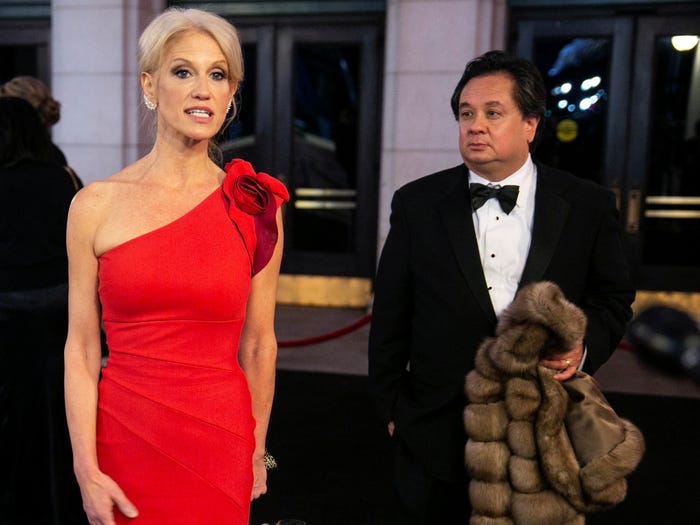 In an interview with former White House senior advisor David Axelrod on CNN's "The Axe Files," Conway spoke of the personal journey she took with her husband, attorney George Conway, emphasizing that support for the former president was not something she demanded from him.

"George owes no to allegiance to a political party, or President Trump, or President Biden, or anything like that. That is not the objection. His vows were to me. The vows were not to agree with me politically," she said.

Kellyanne Conway remarked that her husband was deeply supportive of her when she managed Trump's successful 2016 presidential election, including during the early morning hours after the race was called for the longtime businessman. She also said that his online social media activities were minimal that year, compared to the large online following that he has now.

"Everybody should know that in 2016, known as the 'Year of the tweet,' George Conway sent zero tweets. He has now sent well over 100,000 of them. Again, that's his right, but you should know that," she said.

"You should also know that George, like me, was absolutely exhilarated when Donald Trump was elected and Mike Pence was elected in the wee hours of November 9, 2016," Conway continued.

The veteran political pollster then spoke of the dilemma she now faces and the two have diverged deeply on the issue of Trump.

"I write in the book: You have to decide whether you'd rather be right or rather be loved. I'm not the one who made that decision, frankly," she added.

Kellyanne Conway also emphasized this point in her new memoir, "Here's the Deal," where she said that she could not wrap her head around his vocal opposition to her onetime boss.

"George was free to have opinions, even ones that were at odds with those he'd held just a short time before," she wrote. "The perplexing and vexing part was how public he was with those differences of opinion, how aggressive, how incessant."

She told David Axelrod that the media zeroed in on the very visible conflict between the two public figures and "made him whatever they wanted him to be."

"He's a constitutional law expert. He's a political consultant. He's a psychiatrist diagnosing his non-patient Donald Trump. All I wanted him to be was my husband and the father of my kids," she said.