A LOVE LETTER TO THE ‘BEST MOUNTAIN RANGE ON EARTH’

By:   Verlyn Klinkenborg - The Atlantic

P icture a lone human   walking across the rocky expanse of a planet, talking to himself as he goes—a lone human alert to signs that this is a   planetary   surface, to “the speed,” as he puts it, “of the planet rolling under your feet.” This is the science-fiction writer Kim Stanley Robinson somewhere high in the southern Sierra Nevada—“the heart of the range”—almost any time in the past 49 years. He could be a sunwalker from his novel   2312 , but the planet is Earth, not Mercury, and the California sun won’t incinerate him.

Robinson is hiking off-trail, and—as he writes in his new book,   The High Sierra: A Love Story — his easy gait is a mode of being: “pedestrian and prosy.” He may be paying close attention to anything or nothing: his plantar fasciitis, a scatter of obsidian chips at a Native American knapping site, the way the mountains “seem to glow from within, to pulse with an internal light, under a sky as dark and solid as enamel.” Or he may be comforting himself “with my usual science fiction exercise,” imagining a scene elsewhere in time, working it through in his mind until he can say, yes, “it had been like that.”

If you know Robinson’s highly regarded novels— The Ministry for the Future   or the  Mars  trilogy, for instance—you know the sound of his crisp, impersonal omniscience. But in  The High Sierra , it’s as though a carbon-fiber panel in the wall of one of his novels has slid open and out has stepped  il miglior fabbro  himself, a fit 70-year-old from Davis, California, with a pair of walking poles and a whisper-light backpack, looking forward at sunset to a little Scotch, chilled, if possible, by a shard of vestigial glacier in a world he didn’t have to invent. The Robinson fluency is here: the compact, mobile sentences; the narrative ease; the technical detail. Prosy perhaps—he’s talking right at you—but only literally pedestrian.

His subject in   The High Sierra   is the landscape of “the best mountain range on Earth” and its effect on the human mind.   Psychogeology   is Robinson’s term for it: the feelings and perceptions caused by the exposed rock, the light, the thinner air at altitude—“hippie poet” stuff, in other words. John Muir, he writes, was an early “psychogeologist.” So is Robinson’s friend Gary Snyder and—from an earlier generation—the San Francisco poet Kenneth Rexroth, who, like Robinson, “took a youthful trip into the High Sierra and fell in love with the place, and for the rest of his life went back as often as he could.” But being a psychogeologist—even a hippie poet—requires, in Robinson’s thinking, a way of staying real with the mountains, finding a perceptual precision up in the Sierra rather than getting lost in the easy vagaries of so much nature writing.

T he high sierra   is exoteric —attentive to the general reader, instructive, open in character. But it’s also highly esoteric, best read with constant reference to a good set of topographic maps (or an app like CalTopo). Unless you know the Sierra as well as Robinson does—and not many people do—you’ll find yourself lost geographically. (I don’t know how many Sierra place-names there are above 10,000 feet between Hetch Hetchy in the north and Mount Whitney in the south, but I’m pretty sure Robinson uses them all.) And yet, somehow, being lost doesn’t matter. Will   The High Sierra   mean more to readers who have seen the Tehipite Dome from below or camped on “the crab-claw peninsula sticking into Cirque Lake”? Of course, though it will also mean more to those who have read Emerson and Thoreau than to those who haven’t.

As a mountain-walker, Robinson is who he is because that’s who the Sierras let him be. The range is unusual. It’s a westward-tilted batholith 450 miles long, 60 miles wide, and defined by distinctive basins, “the empty rock containers of the upper ends of glaciers that are now gone.” The basin floors are typically bare rock—“friendly” granite—good for walking, good for ponds and lakes and running water:

“The Sierra Nevada’s basins are its crucial aspect, its distinguishing feature. This is to shift from geology to psychogeology, because what I mean here is that basins are where you want to be as a walker and camper. They are the golden zone.”


The basins are also why you can hike cross-country in the Sierra, unlike other mountain ranges, “where going off trail is often a recipe for disaster.” Robinson’s advice? “Don’t go where the ice didn’t go!” Up there where the ice once went is where things get psychogeological, where time splits open and you realize that “the rocks will be here for millions of years,” but the moment you’re experiencing will not.

Exactly what kind of book is  The High Sierra ? I would call it fractally encyclopedic, borrowing from a phrase—“thinking fractally”—that Robinson uses to describe John  Muir’s work  in his articles and books such as  My First Summer in the Sierra  (1911) and  The Yosemite  (1912). What Robinson means is that Muir was always shifting scale—comparing large to small, using  yosemite , for instance, to mean both a massive landform and an intimate one, even calling California’s Central Valley “a double yosemite.”

In   The High Sierra , Robinson is constantly shifting scale too—shifting scale, subject, angle of attention, even genre. One moment the book is memoir. The next it’s trail guide. Then it’s bibliography, history, ecological meditation, and a discourse on renaming peaks and passes that have culturally unacceptable names. Robinson lets his thoughts scatter and then tracks them down wherever they’ve settled, much like a Sierra sheepherder and his flock in the late 19th century.   The High Sierra   might be subtitled:   A Miscellany —even though it’s a word we don’t use much any more. Robinson registers that the human mind is miscellaneous and invites us to accept that fact.

A mong robinson’s literary   antecedents for   The High Sierra   is an unpublished handbook that Kenneth Rexroth wrote for the Works Progress Administration, or WPA, circa 1939, called   Camping in the Western Mountains . Like   The High Sierra ,   Camping   in the Western Mountains   is a peculiar book. In a section called “The Trail,” Rexroth lists “the three best manuals for camping and woodcraft that will ever be written”: Izaak Walton’s   The Compleat Angler   (1653), Gilbert White’s   The Natural History of Selborne   (1789), and John Bunyan’s   The Pilgrim’s Progress   (1678). Walton, Rexroth writes, is “full of misinformation about fish,” White is “primitive by modern standards,” and Bunyan “traveled only in his own soul.” Which is to say that these are not even remotely camping and woodcraft manuals. And yet there they are, three antique Englishmen a couple of column inches away from this plainspoken sentence: “Never carry anything on your belt except a cup, or anything hung around one shoulder.” Like Robinson, Rexroth has a loose-limbed mind.

That loose-limbed quality is what makes  The High Sierra  so appealing. But it’s also something more. Robinson clearly accepts the limits of what nature writing can do, in his hands at least. After a stunning solo hike, he tries to describe it to a friend. But he discovers that “a day like that can’t be shared; that must not be what they are for.” To him this is a puzzle because he believes that “every human experience should be legible”—a novelist’s premise through and through and a guiding principle in  The High Sierra .

Robinson is no stranger to epiphany; many of his earliest Sierra outings included an acid trip along the way. But he never tries to lead us into the experience of epiphany, however it manifests itself. He’s alert to his own emotions but willing to stand outside them a little, not to diminish them but to understand how they complement his modest, pervasive rationality. “When I’m in the Sierra,” Robinson writes, “I feel different, and good. It’s physical and spiritual. That sense of elevation, of being raised up … gives me an underlying calm, humming like a continuo beneath my thoughts.” The point of  The High Sierra  isn’t to show us the author’s moments of transcendence. It’s to remind us that we can find our own transcendence just the way Robinson did—“following sandy trails winding through pine needles and broken stone, higher and higher, between tall rough-barked trees that grew smaller and more scattered until we were up into an open immense space unlike anything in my life below.”

Rationality   is a word with a dry, ascetic feel to it. Perhaps   reasonableness   comes a little closer to the animating spirit of   The High Sierra . That sounds strange, I know, for a book whose purpose is analyzing Robinson’s “crazy love” of the mountains. But it’s a way of getting at the wholeness of his complex approach to the natural world: inquisitive and emotional, thoughtful and immediate, long-range and short-range, drawing on all the variables in the human spirit.

There’s no Sinai in   The High Sierra   and no mount from which a sermon is being preached. There’s only reflection and common sense, an openness to the experience of others and “the usual science fiction move of looking at our time as future generations will see us.” The animals Muir called “our horizontal brothers and sisters” have been living in the Sierra for thousands of years, and so have people—a few, and mainly in summer. Its landscape is now well known, its major trails crowded with hikers, and if anything, Robinson writes, “the range is a little too well described. Of course here I am contributing to that process.” But what Robinson also contributes is a spirit of engagement with the natural world that’s generous and freeing. “If it’s new to you, then you are discovering it.”

read that and this is what i thought of , what was said at the end as the old guy rode away.

Freshman Principal
3.1  magicschoolbusdropout  replied to  Mark in Wyoming @3    2 months ago

Saw it in the theater when it first came out.

My daughter lives up in the area where it supposedly took place , I pass by "crazy woman canyon" every time i go to visit .

i came to wyoming about the age of johnson , now i feel more like the will greer character of bearclaw . i have done well to keep as much hair as i have with so many after it .

The "Crazy lady and finding Del Gue" Scenes were great.

When I was a freshman in high school, I joined with five other high schoolers on a 10 day hike that started at Tuolumne Meadows and ended at Yosemite Valley.  We backpacked so we only took a five day supply of food.  We forced ourselves to catch fish to have enough to eat.  We need up bring some of our nasty dehydrated food back.  We followed a trail from Mt. Vogelsang to Nevada Falls.

The only people we saw along the way were (occasionally) Park Rangers. 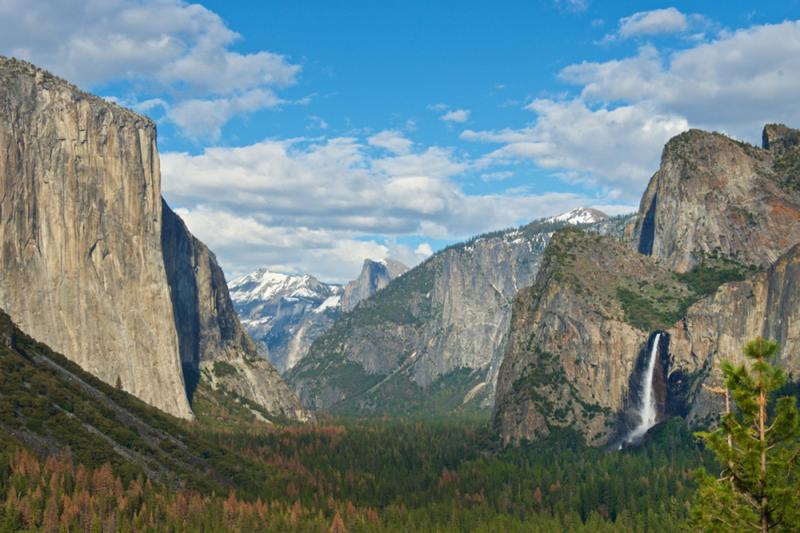 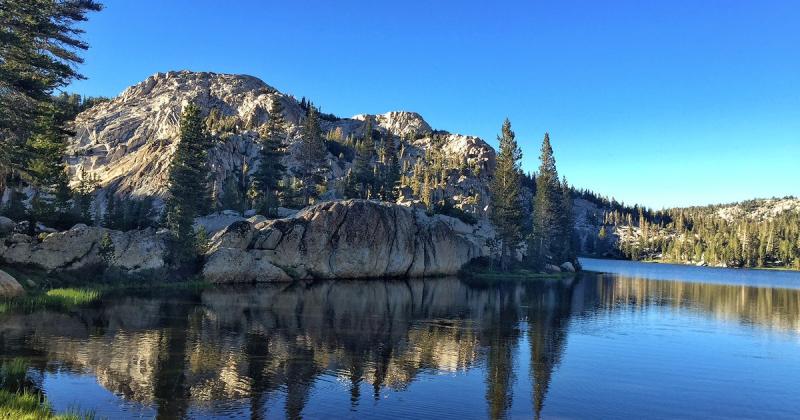