According to a report from Axios, Trump plans to purge the government of career employees with actual expertise, and replace them with only the most hard-core loyalists.

There are countless reasons why Donald Trump should never be allowed to step foot in the White House again, chief among them is his attempt to overturn the results of the last election, his incitement of an insurrection, and his outright refusal to lift a finger to stop the violence he'd set into motion—violence that ultimately left multiple people dead and was recounted in chilling detail by the January 6 committee on Thursday night. (Also: the fact that he struggles to pronounce the word "yesterday.") Those reasons, though, are based on things Trump has already done, when in fact, it's his future plans for a would-be second term that should scare the ever-loving shit out of everyone in this country, and then make them shit some more.

In a long, terrifyingly specific article published on Friday, Axios's Jonathan Swan reports that should Trump win in 2024, he'll unleash an authoritarian rule that will make his plot to steal a second term look innocent by comparison—which is sort of like saying that for his second act, Jeffrey Dahmer was going to do something worse than eat all those people. The "heart" of Trump's plan, according to Swan, involves reinstating the "Schedule F" executive order he signed in October 2020. If you can't remember what that was all about because you were too busy trying not to die from a highly contagious disease the then president had lied to the public about, the order gave Trump the power to take government employees' jobs that were nonpolitical and protected—from, for instance, a president who doesn't believe science is real—and make them "at will." Put another way, it gave him the power to fire thousands of federal workers who actually knew what they were doing and replace them with people who only knew how to pledge their undying loyalty to the 45th president. The former are the kind of people you want, say, working for the Federal Aviation Administration and deciding if a plane is safe to fly. The latter you want on a no-fly list.

If this all seems really bad to you, know that it really, really is! While Trump had originally signed the "Schedule F" order with the intention of implementing it in a second, consecutive term—and Joe Biden rescinded it after taking office—that plan obviously didn't pan out. But now, it's apparently very much at the top of mind should he run a third time and win, and we know this because he literally alluded to it at a rally last March. "We will pass critical reforms making every executive branch employee fireable by the president of the United States," he told a crowd in South Carolina. "The deep state must and will be brought to heel." And this is not just something Trump is characteristically blathering on about with no one knowing what he's talking about. No, this is being carefully plotted by Trump allies who want to ensure the government is filled with loyalists, ready to do his bidding, from the get-go.

Trump remains distracted by his obsession with contesting the 2020 election results. But he has endorsed the work of several groups to prime an administration-in-waiting. Personnel and action plans would be executed in the first 100 days of a second term starting on Jan. 20, 2025. Their work could accelerate controversial policy and enforcement changes, but also enable revenge tours against real or perceived enemies, and potentially insulate the president and allies from investigation or prosecution. They intend to stack thousands of mid-level staff jobs. Well-funded groups are already developing lists of candidates selected often for their animus against the system—in line with Trump's long-running obsession with draining "the swamp." This includes building extensive databases of people vetted as being committed to Trump and his agenda. The preparations are far more advanced and ambitious than previously reported. What is happening now is an inversion of the slapdash and virtually non-existent infrastructure surrounding Trump ahead of his 2017 presidential transition. These groups are operating on multiple fronts: shaping policies, identifying top lieutenants, curating an alternative labor force of unprecedented scale, and preparing for legal challenges and defenses that might go before Trump-friendly judges, all the way to a 6-3 Supreme Court.

And if that sounds scary, just wait! According to Swan, Trump is likely considering Jeffrey Clark for his next attorney general. If that name sounds familiar to you but you don't know why, perhaps it's because he's the guy Trump wanted to make head of the Justice Department in a last-ditch attempt to stay in power, as Clark was the only one at the agency willing to help him overturn the election. As a former DOJ official testified last month, Trump was only convinced not to go through with it after being told there would be mass resignations. "Mr. President," acting Deputy Attorney General Richard Donoghue told Trump, "you're talking about putting a man in that seat who has never tried a criminal case, who's never conducted a criminal investigation. He's telling you that he's going to take charge of the department—115,000 employees, including the entire FBI—and turn the place on a dime and conduct nationwide criminal investigations that will produce results in a matter of days. It's impossible. It's absurd. It's not going to happen and it's going to fail."

Yet while Trump could temporarily, momentarily be reasoned with, and Clark did not get the top job at the time, that's unlikely to happen again. Per Axios, asked at an event in April at Mar-a-Lago what Trump would do with the DOJ if he won in 2024, the attorney—whose home was raided by the feds in June—said that he believed Trump had learned his lesson. Clark, according to Axios, "predicted, Trump would never appoint an attorney general who was not completely on board with his agenda [again]."

Who else could get a top job in a second term? Well:

Trump has…praised Kash Patel , [an attorney and former Trump administration official], who would likely be installed in a senior national security role in a second term, people close to the former president said. If Patel could survive Senate confirmation, there is a good chance Trump would make him CIA or FBI director, these sources said. If not, Patel would likely serve in a senior role in the White House.

Who is Kash Patel?

Patel…enjoyed an extraordinary rise from obscurity to power during the Trump era. Over the course of only a few years, he went from being a little-known Capitol Hill staffer to one of the most powerful figures in the U.S. national security apparatus…. In one astonishing but ill-fated plan, Trump had wanted to install Patel as either the deputy director of the CIA or the FBI late in his administration. He abandoned this only after vehement opposition and warnings from senior officials including [CIA director Gina] Haspel and former Attorney General Bill Barr, who wrote in his own memoir that he told then-chief of staff Mark Meadows that Patel becoming deputy FBI director would happen "over my dead body."


Patel has only grown closer to the former president since he left office. Over the past year, Patel has displayed enough confidence to leverage his fame as a Trump insider—establishing an online store selling self-branded merchandise with "K$H" baseball caps and "Fight With Kash" zip-up fleeces.

He hosts an online show and podcast, "Kash's Corner," and he is a prolific poster on Trump's social media network, Truth Social. In May, Patel re-truthed (the Truth Social equivalent of re-tweeting) a meme of himself and special counsel John Durham "perp walking" a handcuffed Hillary Clinton. He also set up the Kash Patel Legal Offense Trust to raise money to sue journalists. He recently authored an illustrated children's book about the Russia investigation in which "King Donald" is a character persecuted by "Hillary Queenton and her shifty knight."

Meanwhile, angel of darkness Stephen Miller is reportedly also hard at work "identifying and assembling a list of lawyers who would be ready to fill the key general counsel jobs across government in a second-term Trump administration." Trump, you see, didn't like the lawyers he had around last time because they were always telling him his demands "were illegal and could not be implemented." Can't have any of that! Miller, according to Axios, "has his eye out for general counsels who will aggressively implement Trump's orders and skeptically interrogate any career government attorney who tells them their plans are unlawful or cannot be done." In other words, he's looking for people who would possibly break the law for Trump. Elsewhere, the ex-president has apparently been spending "significant amounts of his time talking to luminaries of the 'Stop the Steal' movement, including attorney Boris Epshteyn and the pillow entrepreneur Mike Lindell, who has spent at least $25 million of his own money sowing doubts about the 2020 election result."

In other words, we should all be very, very afraid, and perhaps try to ensure this guy is never allowed to have an inch of power again.

Someone is taking the (additional) revelations that he's a danger to society in stride!

The Jan. 6 Hearing Utterly Embarrassed Trump and All Involved (Looking At You, Josh Hawley ) ( V.F. )

Brother of officer who died after Jan. 6 blames Trump and his "sycophants" (CNN)

There are countless reasons why Donald Trump should never be allowed to step foot in the White House again, chief among them is his attempt to overturn the results of the last election, his incitement of an insurrection, and his outright refusal to lift a finger to stop the violence he'd set into motion—violence that ultimately left multiple people dead and was recounted in chilling detail by the January 6 committee on Thursday night. (Also: the fact that he struggles to pronounce the word "yesterday.") Those reasons, though, are based on things Trump has already done, when in fact, it's his future plans for a would-be second term that should scare the ever-loving shit out of everyone in this country, and then make them shit some more. 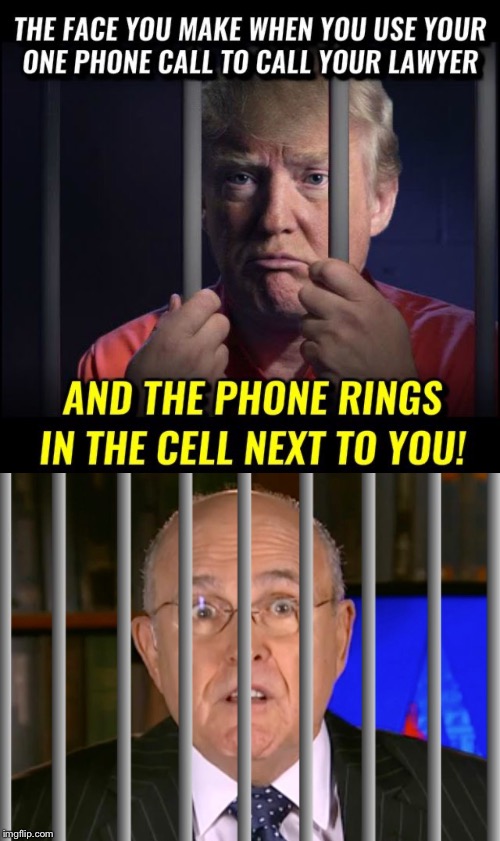 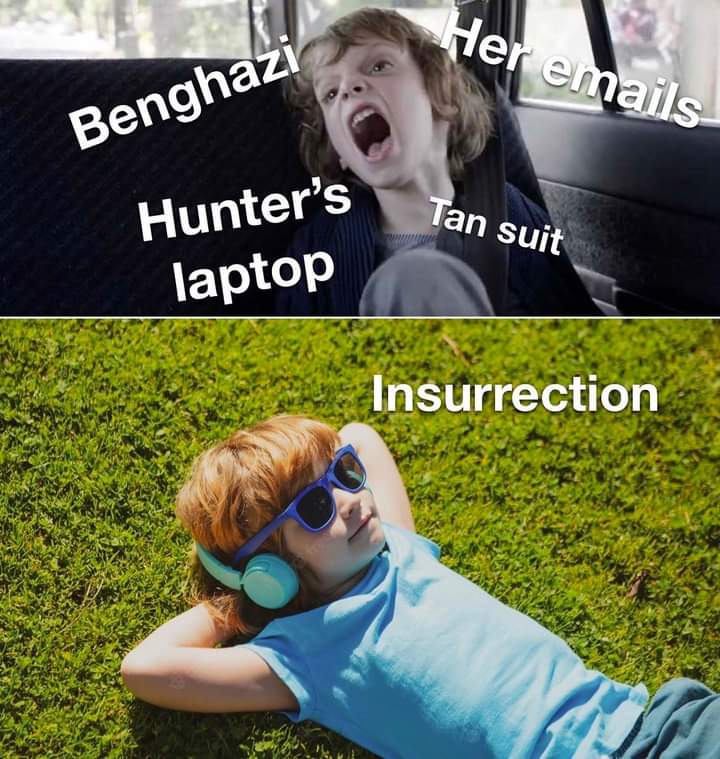 Scare the crap out of you?  A sizable per cent of the electorate does not care and relishes the prospect of 'the strongman' even if in reality that strongman is a coward, dishonest and a weakling.

The Achille's Heel of the Trump and the movement is the time when the Trump with cameras rolling and America watching has to defend himself under oath.  And that is something he can not do.  He can't do it.  He will melt down.  He may even cry.